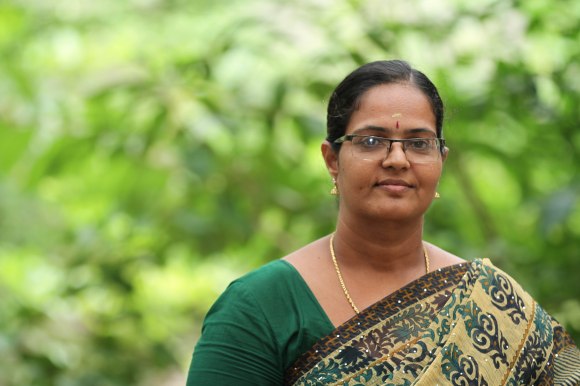 Editor’s note: The author of the blog post is a curator of the Featured Wikimedian project.

That’s why Wikimedia India’s Featured Wikimedian of the Month program was started in 2011 by then-Program Director Ravishankar Ayyankanu. This program is similar in some respects to other “featured” programs like featured articles; featured articles are considered to be the best work on Wikipedia, and are referred to by editors as good examples for writing other articles in terms of style and structure. Featured Wikimedians are some the best and most-respected Wikimedians, whose contributions inspire and motivate other users to improve their own work.

The advantage of this program is that all the Indian communities get to know the Wikimedian when it is announced on the Indian and other community mailing lists, in addition to some level of exposure and recognition from the broader international community.

For a Wikimedian to be featured, several channels, processes, and criteria, are taken into consideration. We usually refrain from featuring users who already have strong offline ties with other users or is well-known across the country, choosing instead to ‘bump’ users who are contributing stellar if less visible work. We also try to ensure that each year’s worth of Featured Wikimedians are drawn from a variety of languages and project.

Here are some stories of Wikimedians from the archives since 2011: 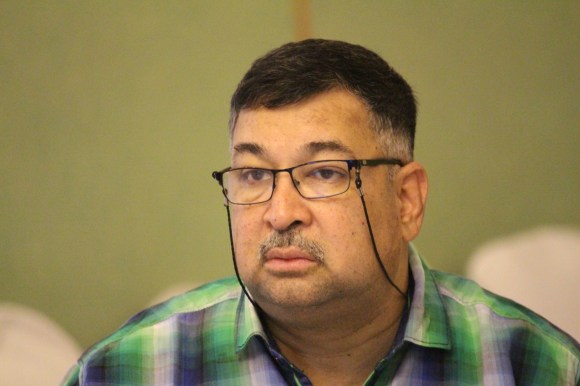 User:AshLin (2011): Col. Ashwin Baindur (retd.) is a former veteran from the Indian Army, and has been contributing since April 2009. He edits on a wide variety of subjects including biodiversity, philately, science, and military history. He was involved in GLAM activity of Victoria and Albert Museum for expanding Tipu’s Tiger. He was instrumental in defining a framework to the Offline Schools Wikipedia Indian Edition, and the cleanup effort needed for WikiProject India on the English Wikipedia.

User:Parvathisri (2013, photo at top): Parvathi Sridharan is from the Tamil community. She started contributing to Wikimedia projects in 2011, and by 2013 she created more than five hundred articles on the Tamil Wikipedia, on which she is the second women to become an administrator. Of these five hundred, thirty-five articles were featured on the main page. She was a member of offline Wiki project in Tamil, an effort to bring Wikipedia to school children who do not have internet access. She has also won a prize in a media contestconducted by Tamil Wikimedia community. Parvathi’s daughter, Abhirami Narayanan, also contributes to Wikipedia under her guidance. 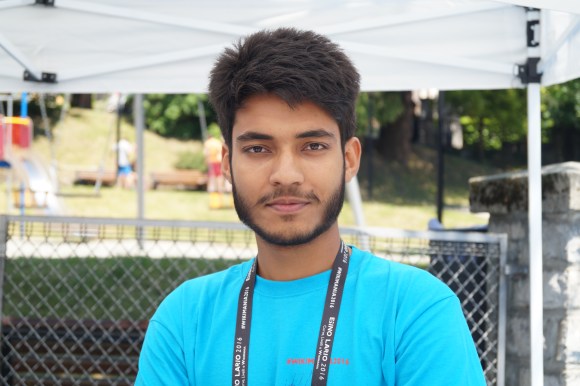 User:Satdeep Gill (December 2014): Satdeep Gill at that point was a student from Punjabi University, Patiala. He mostly contributes to Punjabi Wikipedia, and occasionally on Urdu, Hindi, Western Punjabi, English and French Wikipedias as well. In 2015, Satdeep has been conferred an honourable mention by Jimbo for the Wikipedian of the Year award. His efforts to encourage people at his university to edit the Punjabi Wikipedia made it the fastest-growing Indic-language Wikipedia that year. 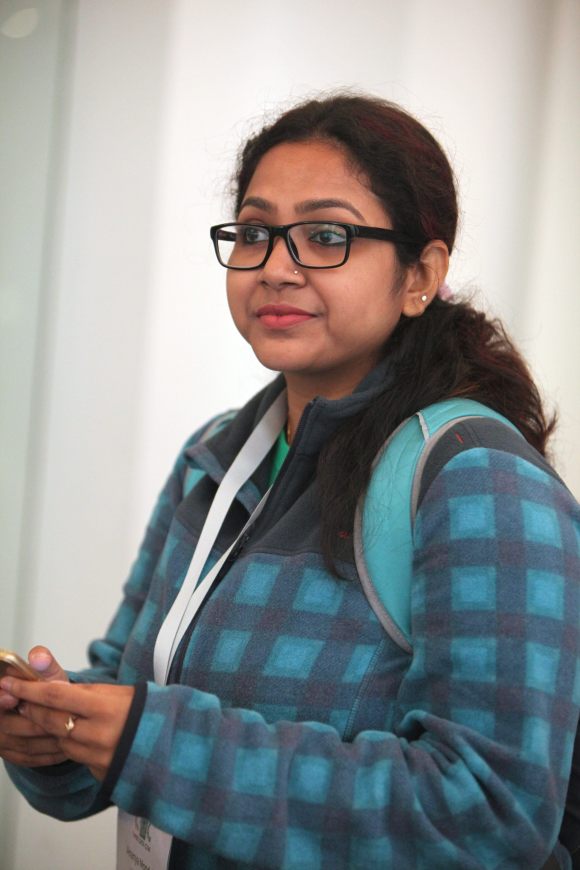 User:Atudu (2016): Ananya Mondal is from Bengali community, and often credited as the butterfly-Wikipedian, for starting the initiative of Wiki Loves Butterfly, the first ever Wiki Loves project exclusively about butterflies. The first phase of the project has been successfully completed, and she is now planning for the second phase. Sixty percent of the images uploaded as a part of the project are in use on various Wikimedia projects, and the project even attracted attention from media. 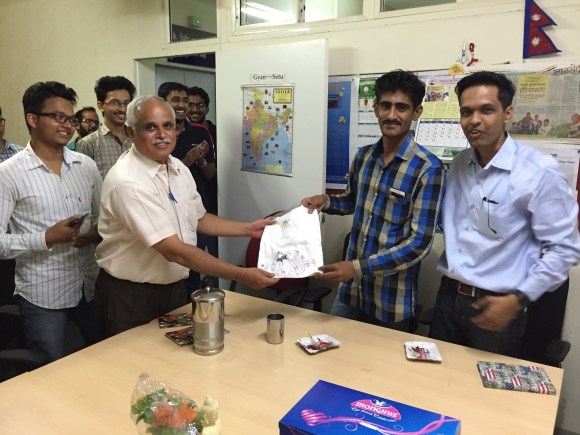 User:राजू जांगिड़ (2016): Raju Jangid is from Hindi community, and one of the most activie users on Hindi Wikipedia. He started in 2015, and within one year (as of July 2016) he created almost 750 articles. The interesting part of his story in that, rarely having access to a desktop or a laptop, most of his contributions have been done through his Samsung Galaxy mobile. He was later supported for a laptop to boost his work. Raju was also one of the core organizers of Hindi Wikipedia Conference in January 2018. 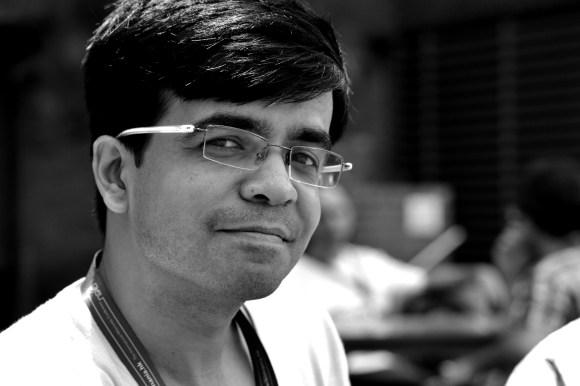 User:KartikMistry (2016): Kartik Mistry is one of Gujarati community. He extensively contributes to Gujarati Wikipedia and Wikidata, and has more than 45,000 contributions globally. Presently he is a part of the Language Team of Wikimedia Foundation, and was highly instrumental in creating the language input tool, which made editing in vernacular languages easier. He was also involved with project to develop the content translation tool. This tool is one of the most useful tools ever created in recent times, and was used to translate more than 80,000 articles in a span of one and a half year. 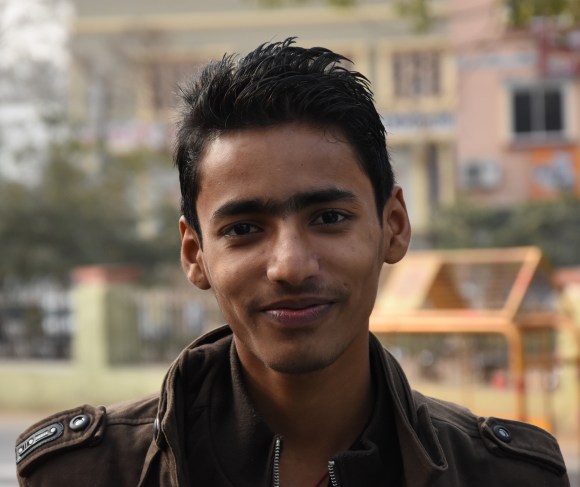 User:Tulsi Bhagat (2016): Tulsi Bhagat is from Nepal. He was fifteen years old when started editing Wikipedia in 2014. He was then credited to be the youngest, and one of the most prolific editors from the community. He authored more than five hundred articles on Maithili Wikipedia, and has over 45,000 global contributions. He is now a part of the organizing team for Wikicamp Nepal 2018. 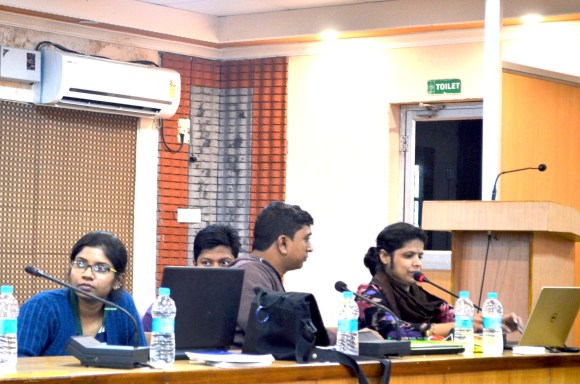 User:Pmsarangi (2016): Pankajmala Sarangi is from Odia community. She has been contributing to Odia Wikisource since 2014. She started off with the book Chha Mana Atha Gunth. Her best works include Odia Bhagabata, Odisha Itihasa. Described by her fellow Wikimedian Sailesh Patnaik as an “asset to the Wikimedia community”, she points to younger volunteers as motivation to contribute more. She actively takes part in community activities, and outreach events. 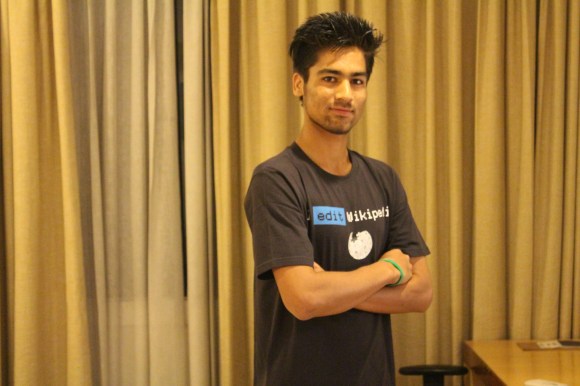 User:Satpal Dandiwal (2017): Satpal Singh is from Punjabi community. He started in 2016, at the age of sixteen, was then the second youngest Punjabi Wikimedian. Similar to Raju Jangid, having no access to a computer, most his edits have been done from mobile. He was ranked first in the Article Improvement Edit-a-thon in 2016, on Punjabi Wikipedia. He is also a Wikipedia Asian Month Ambassador. 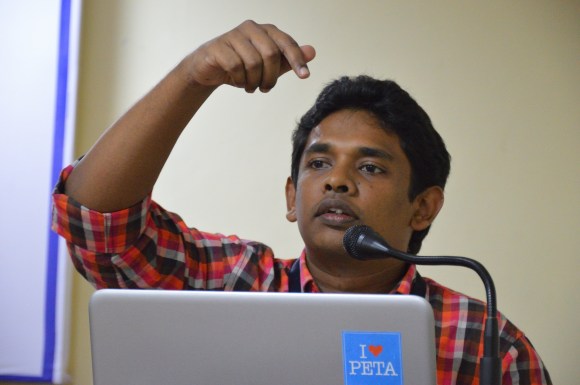 Photo by Biswarup Ganguly, CC BY 3.0.

User:Balajijagadesh (2017): J. Balaji is from Tamil community. Though he started contributing since 2009 anonymously, he was quite active after his participation in WikiConference India 2011. Initially he started contributing to Tamil Wikipedia, but was later attracted towards Tamil Wikisource, Tamil Wiktionary, and Wikidata. His global contributions count to whooping 2,50,000 edits, and is an admin on Tamil Wiktionary. He also maintains the Tamil Wikisource’s official Twitter handle. He says that with Wikidata, we can “Imagine a world in which every single human being and every single machine can freely share in the sum of all knowledge” 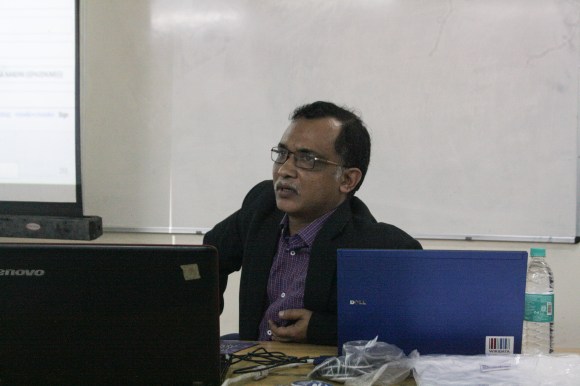 User:Hrishikes (2017): Hrishikes Sen is from Bengali community. He started regularly contributing to Bengali Wikisource from 2012, and expanded to English Wikisource as well. With more than 45,000 global edits, he is an admin on English Wikisource. The journey and motivation behind his contributions to Wikisource can be read from a post on the Wikimedia Foundation’s blog, “Why I contribute to Wikisource?” Apart from being a proofreader, he uploaded more than 750 books spreading over five languages to Wikimedia Commons.

User:Yercaud-elango (2018): Yercaud Elango is from Tamil community. In 2014, he got his first exposure to the Commons community, and has been very active ever since. Within three years, he uploaded more than 10,800 photographs to Wikimedia Commons. His uploads include 2,450 plant species, and 7,675 sub classifications of plants. He spends minutes, hours, days, even  (months and years to identify scientific names, before uploading them to Commons. One of his significant works include, uploading images of 200 rare and endangered plant species that belong to Yercaud Hills to Commons. Interestingly, of the 1003 Moth images available on Commons, 300 were contributed by Elango. 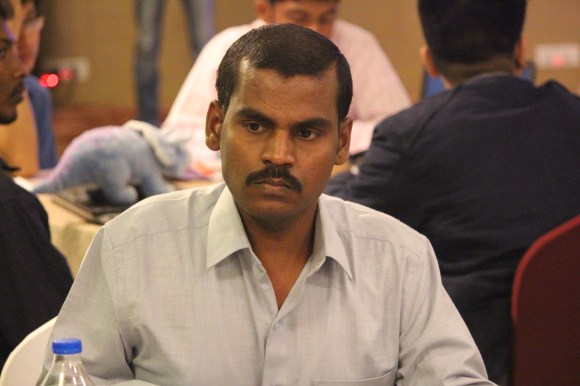 User:Sangappadyamani (2018): Sangappa Dyamani is from Kannada community. He started contributing to English Wikipedia in 2012, and made his first edit on Kannada Wikipedia in 2016. The fascinating part of Sangappa’s contributions is linked with the Google Doodle section on Kannada Wikipedia Main Page. Every day, the subjects that are honoured by Google by featured them as their Doodle, are created/improved by Sangappa within a few hours of its being updated at 00:00 hrs every day. He says that in this way, he ensures that all the popular topics of India are well represented on Kannada Wikipedia. He also puts the wait during traffic jams from his home to office, and vice versa, to the best use, by making edits on Wikipedia during that period. 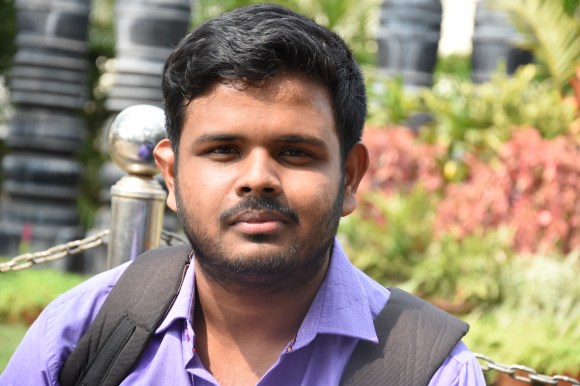 User:Ssgapu22 (2018): Sangram Keshari Senapati is from Odia community. Upon knowing about Odia Wikipedia, he started contributing to it. But as his writing skills were not good, he used to proofread works on Odia Wikisource, and from that experience he learned the exact pattern of writing in Odia. From his contributions, it can be said that Sangram is an ambassador of the #100Wikidays challenge. His first challenge was #100WikiWomanDays, which he started on 8 March 2017, i.e. International Women’s Day. Having successfully completed it on 15 June, he took up another #100Wikidays on 13 July. Immediately after its completion 20 October, he took up his third challenge, and then the fourth challenge. He is now on his fifth, and he aspires to complete his WikiYear someday.

All these Wikimedians have and can continue to play an important role in the community building. More such inspiring stories can be read at our featured Wikimedian archive.