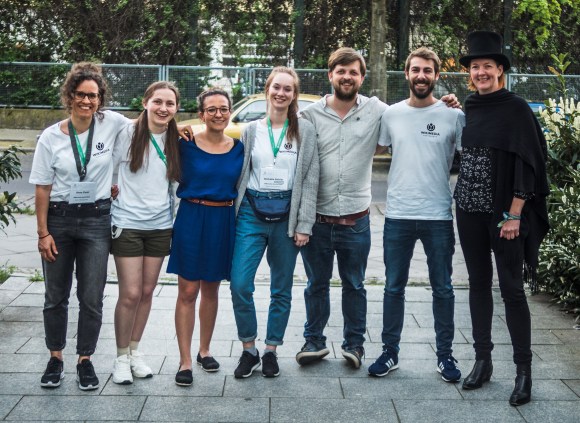 Those of us who spent years working inside the Wikimedia movement tend to forget how strange it actually is to the rest of the world. Many Wikimedians may not know a lot about the Visiting Wikimedian program from Wikimedia Germany (Deutschland), but if not, you’d probably be able to get to Meta-Wiki and get an idea of what it’s all about.

However, now try to imagine explaining this idea to a consular officer at a German embassy who you’re really hoping will issue you a visa to enter the country. Good luck!

This was my reality earlier this year, as Wikimedia Germany invited me to be this years’ Visiting Wikimedian to support organising the 2018 Wikimedia Conference (WMCON), the annual meeting of representatives of Wikimedia organizations and groups.. Is it a job title? No. Is it a study program? No, and WMDE is not a college. Is it an exchange between subsidiaries in different countries? Well, no. This is a learning program for a person from a sister affiliate to gain expertise in organising an international conference and to share it back home.

Luckily, the embassy/consular officer got the idea!

Since Teele Vaalma of Wikimedia Estonia invented this program in 2016, it has become more refined: it is tougher to get into, the stay in Berlin is longer, and probably more difficult to let go when it’s time to leave.

To attend WMCON, one needs to be selected by one’s affiliate or community. WMCON is organised by Wikimedia Germany, the oldest and the largest chapter. After having attended WMCON in 2017 as participant, I was eager to join the next conference from the organizational side. I was so happy to be chosen!

Transitioning into living in Berlin was relatively simple. The only major challenges were in finding a room, which took some time, but ended very well; and in getting used to using and thinking in euros, which you have to do when your bank account is measured in hryvnias. It also took some effort not to feel lost looking at the Berlin public transport map.

Working in Wikimedia Germany’s office appeared to be amazing. I was given an office tour and introductory talk with every department. I found a workplace ready for me, with the supplies which I would need to be productive. I particularly found pleasure in many small things: for instance, in Ukraine I was working remotely from home. In Berlin it was a pleasure to ask something and immediately receive an answer—vocally, without writing, calling or even moving from my chair. Or the fresh coffee I could drink every morning. Or the special feeling of perfectly tuned team where everyone knows their duties and deadlines. Or—and this is not a small thing—weekly meetings that were held in English just for my sake. Or being able to ask “give me something to do”. Pure joy.

Since my main task here was to learn, I was free to choose what I want to focus on. I chose looking closely at the program design process, and so Cornelius, Program and Engagement Coordinator of WMCON, took me through all the stages of building the Capacity Building Track: from identifying the most repetitive needs of the participants, looking for the participants who are willing to fulfill these needs, having briefing calls with future speakers, to helping speakers at the conference itself, having the debriefing calls and writing down summaries of the sessions.

“When you are available for new tasks, tell me”, said Daniela, Logistics and Event Coordinator, and so at times I switched to logistics tasks: setting up the hotel rooming list of participants, designing name badges and signs for the site, thinking of a party game, and writing emails. Thanks to Davit Saroyan of Wikimedia Armenia, Visiting Wikimedian in 2017, who took on conference design last year, I only had to change the colors of the signs this time! We also implemented the Buddy Project again this year, aimed at pairing experienced participants with newbies at the conference, and I was the one who made the pairs and trios. Sadly, several embassies rejected visa applications of our attendees, which ruined some perfect buddy matches, and we weren’t able to hear the input from these people at the sessions, too. 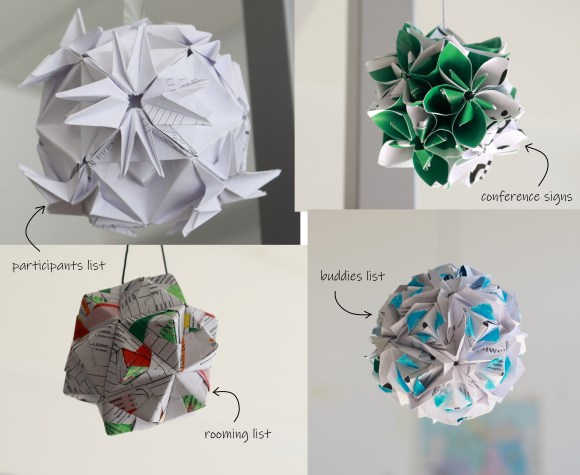 I was sad to be wasting a lot of paper, so his turned to my beloved hobby of making kusudamas. Photo by Vira Motorko, CC0.

The coolest thing about the way WMDE prepares WMCON is in its planning. If you have ever read about learning patterns on Meta-Wiki, you probably often saw the following recommendations: plan ahead, be prepared. To me, the peak of planning the Wikimedia Conference is a so-called “production schedule”. This document is a detailed schedule of activities that need to be completed by different involved parties during the conference days. From what hour we are transporting the material to the venue, when are the preparations to the next day done, who is responsible for changing room settings in between the sessions to when is the food served and when are the breaks and who is going to check whether everything is ready for the next day—you can find it all in a single spreadsheet. The venue was expecting to get this kind of plan from us but even they were amazed by the level of detail Daniela managed to provide. That’s why writing a production schedule for an event is the learning pattern that I decided to write as the outcome of my visiting-wikimedianship.

During the conference there was a volunteer assigned to every room to help the speaker with whatever they need, that be preparing slides or tracking time. This person was called a “Room angel”. And I had to be one, too, so I thought to myself: since I’m an angel, I might as well have wings. This is how I tinkered paper wings and wore them in turns at the conference. Someone called it a “little angel cosplay”, so be it. A little fun at the serious conference. 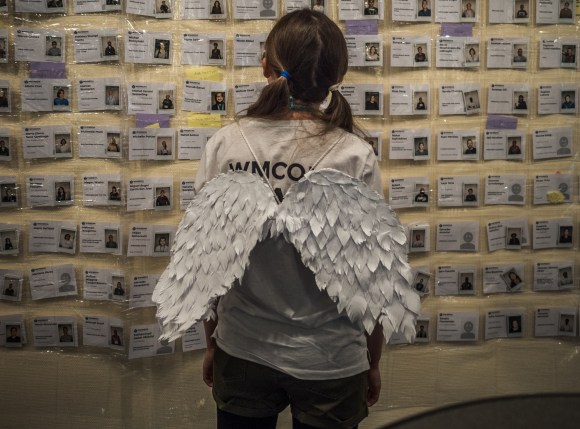 While fun, the Wikimedia Conference also tackles some very serious material. The strategic direction of the Wikimedia movement was largely formed here, for instance, and related discussions will remain the main purpose of WMCON for the near future. I was glad to see some really devoted participants. In my point of view, attending WMCON is not a prize—it’s a working conference where you are representing one’s entire community and tasked with taking back as much knowledge as one can. To be truly productive, you need to plan ahead and be prepared.

Now what? I’m going back to Lviv, Ukraine, where we will host the CEE Meeting 2018 in October. My native chapter waits for me to bring in new knowledge that we can use while organising this regional conference for Wikimedians of Central and Eastern Europe. I dream of a meeting that evolves into a powerful learning conference, just as WMCON is evolving in its decision-making. My impressions are still raw and I have a lot to process, but I want to do my best, because this is what Wikimedians do.

I’m not very good at taking home souvenirs, struggling to choose something memorable. So I decided to leave something memorable instead: I had a haircut and made a pair of paper wings for each of my teammates from Event Management. I like this team so much, that I hope these wings will be able to lift them up when they need and make it all a bit lighter.