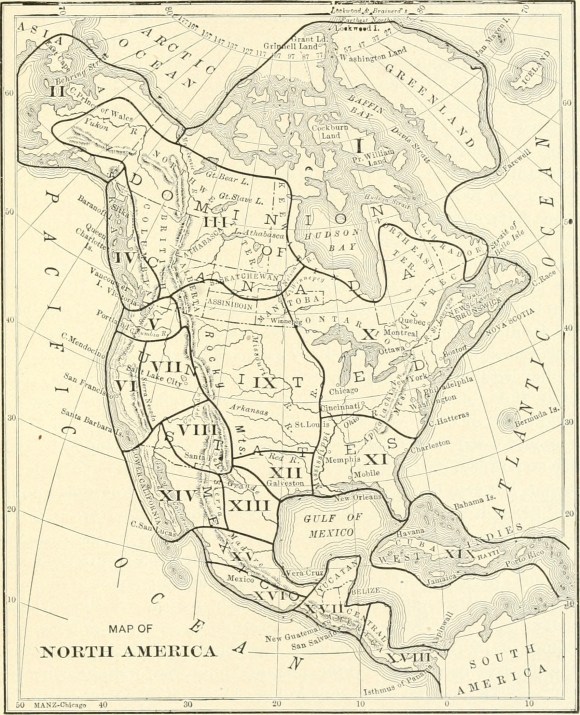 Map by the Smithsonian, public domain.

Canada, the United States, and Mexico have started negotiations for a new NAFTA treaty. After a period of uncertainty, we now know that copyright provisions are among the items to be discussed by the treaty nations. This brings back memories of a trade treaty that seemed defeated just last year: the Trans-Pacific Partnership (TPP) included worrisome norms on copyright that would have seriously harmed the public domain in various countries and cemented long copyright terms for years to come. TPP was further problematic because of secrecy and a lack of transparency around the negotiations, which made it hard for civil society to stay informed, let alone voice its concerns.

Along with many other organizations who support and promote open culture and freedom on the internet – from all three countries—we have signed a statement urging the parties to the treaty to make the negotiations more transparent, inclusive, and participative. Meaningful transparency helps people understand and take action. At Wikimedia, openness and collaborative processes are the default. Only when this value of meaningful transparency is upheld in trade negotiations can we as a society make sure that the public interest is represented alongside powerful industry stakeholders. Increased transparency and active inclusion would also improve acceptance in society in general, especially in Mexico where some feel that the United States are exporting their business model to weaker states.

Our letter calls on Canada, the United States, and Mexico not to touch the intellectual property provisions in the existing agreement. In the digital age, the ways people access and participate in knowledge change rapidly and constantly. Therefore, it does not make sense to lock in new copyright rules that would prevent countries from adopting dynamic legislation or regulation that is appropriate within their respective ecosystem of knowledge production and consumption. Governments should be able to promote freedom of expression and access to knowledge at all times.

Given the fact that copyright now is part of the negotiations nevertheless, we urge governments to adequately promote creativity through permissive copyright and strong protections for the public domain. We believe that copyright should reflect the reality that people do not just read but create, share, remix information. The treaty should safeguard the rights of these new creators through strong exceptions and limitations, fair use or fair dealing rules, and a vibrant public domain. When volunteers contribute to Wikipedia or other Wikimedia projects, they become creators themselves and depend on copyright to empower them to collect knowledge online and to participate in the preservation of culture and history. Intellectual property provisions also need to be mindful of indigenous knowledge and folklore, which forms an important part of the cultural heritage of North America.

Finally, consistent with our continuous commitment to strong privacy rules, our letter points out that any provision in the agreement governing data flows on the internet with the goal of reducing barriers to trade must not restrict countries’ ability to protect the privacy and security of citizens. This is crucial, since we believe that privacy is the foundation of intellectual freedom and allows everyone to contribute to free knowledge.

The new negotiations for NAFTA will shape how people in North America share and consume knowledge for years to come. The negotiations must be transparent so we and other supporters of open culture and internet freedom can contribute and participate. It is in the public interest to make sure any new copyright provisions will allow free knowledge to continue to thrive.