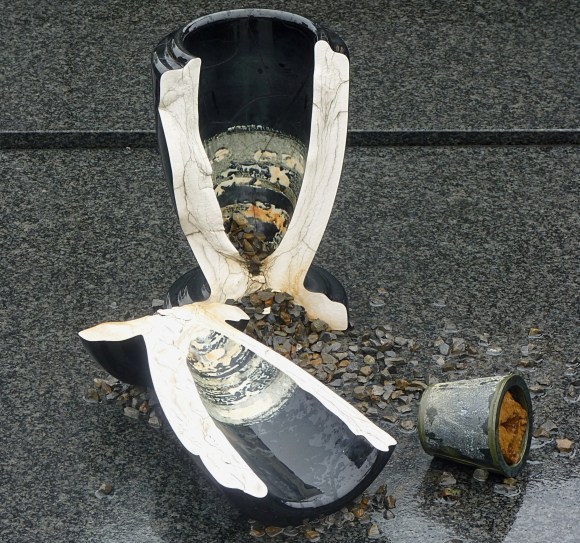 Few people have faced the dangerous consequences of unresolved conflict as personally as Ingrid Betancourt did in 2002, when the then-presidential candidate was kidnapped by the Revolutionary Armed Forces of Colombia (FARC) for six years. She now encourages others to protect free knowledge and credible sources as an advocate for peace.

Betancourt recently told the Wikimedia Foundation that she believes that “values are important in the spreading of free knowledge. … Fake news is dangerous. Spinning the news is very dangerous. You can distort information to obtain a result.” One of the biggest threats to trustworthy information starts with how people evaluate sources (read how Wikipedians do it). Some may focus on content created with a profit motive, others point to government-controlled propaganda, while others say the problem starts with fake news (the subject of a recent discussion at Yale University attended by members of the Wikimedia legal team).

With so many different aspects to focus on (or neglect), misinformation threatens to delay all kinds of efforts to strengthen trustworthy knowledge across political and social divides.

As part of the Wikimedia 2030 strategy process, researchers at Lutman and Associates and Dot Connector Studio assessed over one hundred reports, articles, and studies to review how misinformation threatens the future of free knowledge. The assessments include dozens of powerful examples of how misinformation can have far-reaching and devastating consequences.

The researchers had a big task set out for them, so they divided and conquered the broad scope of misinformation trends by splitting the matter into two categories: first, a “content” category which focuses on trends that affect sources used by Wikimedians to develop reliable information and an “access” category, which refers to “how and whether Wikipedia users are able to use the platform.” Their framework allows for the comparison of different sources (technology, government/politics, and commerce) which fuel disruption of verifiable source usage and access to trustworthy information. 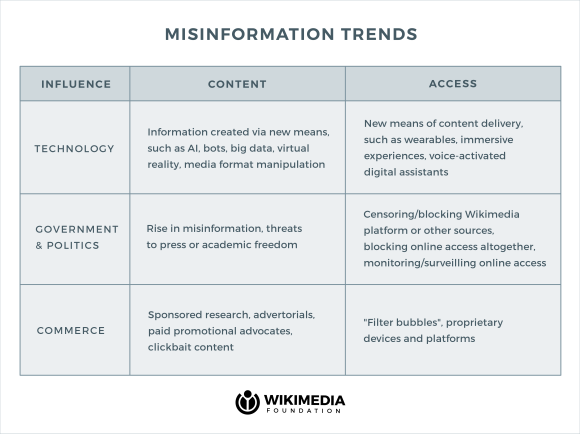 Consider how the sources of reliable information (in this framework, that’s the content category) is influenced by misinformation that is created and/or shared by governments and political groups, for example:

While they were tasked to inform the Wikimedia community about the prospects for future trustworthy knowledge, the researchers’ insights may also provide materials and insights for discussions held by other professionals challenged with misinformation and falsified materials, including researchers and academics, journalists, policy-makers and thinkers.

For Betancourt, ensuring “equality among human beings” requires us to talk to people we disagree with. While it may appear to be a counter-intuitive method, finding common ground is an essential part of establishing the guidelines of trustworthy knowledge-sharing in politically toxic environments. In her experience as a real-life hostage, “not talking or refusing to communicate… was a worse attitude than communicating.”

How can the Wikipedia community combat misinformation and censorship in the decades to come? The researchers offered their own suggestions, and we invite you to join us to discuss the challenges posed by this and other research.