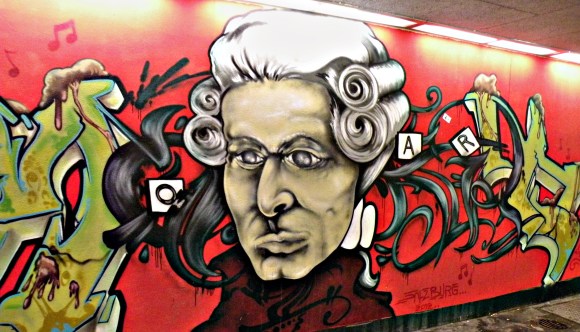 Collaboration has reached a new level in Kiev, Ukraine, where professional musicians are bringing the magic of Mozart, Chopin, and more classical composers to Ukrainian speakers and releasing the work under free licenses.

The latest installment in the long-running World Classics in Ukraine (WCU) project came last month. On 18 June, Ukrainian musicians presented parts of The Marriage of Figaro, Don Giovanni, and Magic Flute, all operas from Mozart that premiered in the 1780s–90s. On the following day, another set of musicians performed Chopin’s Polish songs, a set of 19 texts that Chopin set to music at various points in the 1800s.

You can hear, watch, read, sing, and download the music for yourself. Audio and video from the performances, along with Ukrainian scores and lyrics, are available on Wikimedia Commons. Their free licenses mean that anyone, anywhere can use the works with a minimum of stipulations, such as attributing the creators and releasing any remixes under a similar copyright license.

Wrapping up one of the concerts. Photo by Василь Шевченко, CC BY-SA 4.0.

Organizer and Ukrainian Wikipedian Andriy Bondarenko says that everyone should have these sorts of works in their native language so that it can make deep connections within an individual. “World Classic in Ukraine’s goal is to give the public access to translations of all the masterpieces of vocal music,” he says.

Obtaining the necessary ingredients for these performances has occasionally proved to be a challenge. The translations for the three Mozart operas performed last month, for example, came from historical translations completed by two people, both by now deceased. WCU project supporters had to work with their heirs to get permission to use the translations, proofread them for accuracy (as some information had been lost over the years), and upload them under free licenses. In another example, WCU was able to collaborate with Olena O’Lear, a well-known Ukrainian translator, to obtain a complete version of Dido and Aeneas.

This hasn’t always been successful. Bondarenko says that the team “managed to find translations of two songs performed by Borys Ten, but because Ten left no heirs, they are both orphan works.”

Still, they soldier on. With the latest recordings, WCU has obtained over 200 minutes of classical music. Bondarenko has hopes to bring this into the dozens or even hundreds of hours over the upcoming years. “The bulk of the great classics have yet to be translated,” he says. “All we need are the translators.”

Interested in starting a similar project in your own community? Read more about a similar but unrelated initiative in Spain to recruit musicians, record concerts, and release the results under free licenses.