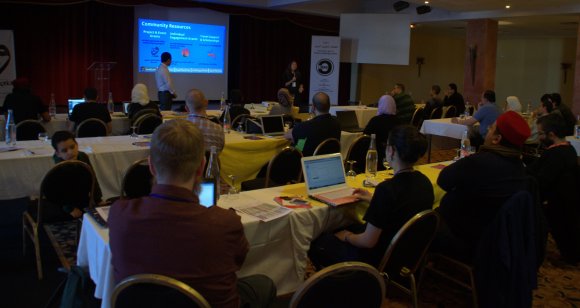 In under two months, thirteen Wikipedians have created 472 new articles on the Arabic Wikipedia. Eight of those articles have been nominated for featured and good articles, articles that are rated by the Wikipedia community as one of the best on the encyclopedias. Those Wikipedians achieved this as part of the Somou Prize writing project.

Somou was a writing contest on the Arabic Wikipedia that lasted from 1 February through 29 March 2017. The contest encouraged both experienced and new users to create new articles that meet minimum quality standards on the Arabic Wikipedia, especially within Wikipedia’s areas of need. Participants who reached the goals received modest rewards.

The word itself is Arabic for “elevation,” but the prize was named after the Saudi prize grantmaking association Somou Society, which supports community development projects in the cultural and educational fields in the Arab World.

“Wikipedia is [one of] the most famous content platforms that comes first in search results. That’s why we’ve chosen to support it,” said Noura Elamoudy and Bayiena Alqahtany from Somou Society. “Contributors don’t need to go to a certain place or necessarily work with a certain group of people. It is open for volunteers anywhere at any time.”

Somou Society reached out to the Arabic Wikipedia community with an offer to support one of their projects, without placing limitations on what that project would look like. Wikipedian Mervat Salman came up with the idea of the contest and took the lead on implementing it.

Having participated in several contests, both as a contributor and organizer, Salman thought about an option that encourages “the most people to participate and win.” That way, the participants will be thinking more about challenging themselves rather than competing with fellow Wikipedians.

“I wanted everyone to be able to participate,” Salman explains, “so I could get the attention of the newbies.” She continues:

“The second step was establishing a team. I asked three active Arabic Wikipedia editors to support us and help us unofficially formulate the rules.” Farah Mustaklem, Bachounda Mohamed, and Mahmoud Alrawi worked with Salman on drafting the rules and Somou Society immediately “welcomed the plan and agreed to announce the contest,” according to Salman.

“I’m proud that we were able to turn this from a competition between editors into a personal challenge for each,” Mustaklem says. “No “prizes” were given, but rewards were given depending on individual contribution. I believe there is a need to encourage new and old editors alike to add good content to Wikipedia.”

Any participant who creates 20 new articles or more that are well written with a minimum of five kilobytes that conform with Wikipedia’s style guide could win. More points were given to those working on articles in Wikipedia’s areas of need, i.e., scientific, medical, engineering articles, etc.

That approach led to the creation of 241 articles in those fields, which is slightly over half of all the articles created. Many editors were encouraged by the contest to write about their field of study and things they have passion for.

“Since joining medical school, nothing has made me as happy as eliminating false information and helping patients understand their cases,” says Fatma Alzahraa, a Wikipedian and Somou Prize participant. “I have spent four years searching for ways to share knowledge as a form of Zakat (giving charity) to teach people what I have learned. My friend Eman Alemam and the Daad Initiative introduced me to Wikipedia, where I both share my knowledge and learn new things.”

Fatma Alzahraa lost her dad a few days after the beginning of the contest. She took a break from the internet but returned before the contest ended, where she found shelter from negative feelings.

“I don’t think that I will be as balanced [emotionally] as I was when my father was alive, but I’m happy that Wikipedia was in my mind and that I remembered to participate in time. I focused mainly on Wikipedia and my school exams.” Incidentally, Fatma Alzahraa did great in both of them.

Like Fatma Alzahraa, Alaa is a medical student who joined the contest to work mainly on medical articles. Alaa earned most of his points in the contest with 64 newly created articles. “My goal from day one on Wikipedia was to share what I learned in different topics and in the medical field in particular. I work on verifying the information and adding reliable references, which is really important as false information may mislead the reader and be bad for Wikipedia’s reputation.”

In the last day of the competition, Alaa wrote 17 new articles with over 120 kilobytes to help achieve the goal he established for himself.

Wikipedia user Abdulkader.saied from Aleppo, Syria participated in the contest with articles about agriculture and animal husbandry. He believes that editing is a great way to learn and unplug. “Reaching the contest goals in the midst of the current crisis and with my school exam makes me feel proud,” he states.

The achievements of Fatma Alzahraa, Alaa, Abdulkader.saied, and their fellow contributors made everyone look forward to similar future projects. Alamody and Alqahtany from Somou Society told us that they “may repeat the experiment and expand the effort if given the opportunity.”

Pedagogy Award of the year in Sweden: The Wikipedia Education Program and the Wikipedia GLAM community (Galleries, Libraries, Archives, and Museums) in Sweden are joining forces for a project that gives schools an access to collections and literature to help share it on Wikimedia projects. Their efforts have been recognised with the Pedagogy Award of the Year, presented at the spring conference for Swedish Museums on 25 April. The award highlights projects and collaborations with significant insights into how cultural institutions can successfully work with school programs in various contexts.

Wikimedia Sweden (Sverige) partnered with Stockholm Digital Archives for Schools and the Swedish National Heritage Board to start the project in 2016. 250 students, in primary and secondary education, and 10 teachers in Stockholm joined the pilot.

Google Summer of Code (GSoC) is an annual project where students spend the summer working on a free open-source project of their choice mentored by one of the participating organizations. Outreachy is a program that connects people from groups underrepresented in free and open source software in a three-month, full-time internship and runs two editions every year. Wikimedia is a mentoring organization in both of the programs.

Board of Trustees: On Sunday, the elections committee for the 2017 Wikimedia Foundation Board of Trustees elections held a live discussion for the candidates to introduce themselves and share their future plans with the Wikimedia community in addition to answering their questions.

Student editors in Egypt wrap up nine terms on Wikipedia: Students in Cairo and Alazhar universities in Egypt have finished the ninth term of the Wikipedia Education Program. The program aims at assigning students to edit Wikipedia as part of their school work. In Egypt, student editors have added millions of bytes to Wikipedia.

According to Walaa Abdel Manaem, a Wikipedia and program leader in Cairo University, “12.3% of the featured articles, 7.7% of good articles, 2.7% of featured portals, and 3.8% of featured lists of the Arabic Wikipedia,” are developed by the program students in Egypt.

Central and Eastern Europe Wikipedians write many articles about Romania and Moldova: Participants of the Wikimedia CEE Spring writing contest has spent the last two months writing about their region’s culture, history, geography and politics. That resulted in writing over 3,400 articles.

Hungarians did a particularly notable job as they wrote 80 articles mainly about Romanian female gymnasts. Bulgarians joined the efforts and created 27 articles on Romania and Moldova, while Ukrainians created 22.