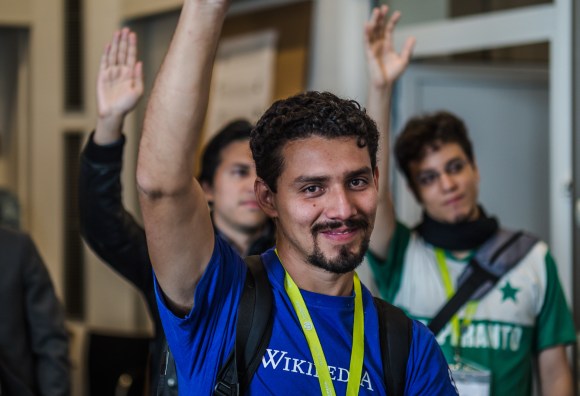 Since joining the Wikimedia movement three years ago, Luis Álvarez has contributed thousands of edits on the Spanish Wikipedia, in addition to photos that he took and uploaded to Wikimedia Commons, the free media repository.

Furthermore, he has invested much time in recording and uploading different types of audio files. His sound contributions include self-composed music that accompanies educational videos (like the one below), ambient sounds that can add life to relevant Wikipedia articles or be remixed for different purposes, sound effects that he made, sonic experiments, recording public domain music performances, and more.

Separate from his composing, Álvarez is a university teacher at the Autonomous University of Aguascalientes. He is presently working on his PhD in Sociocultural Studies.

Álvarez learned about Wikipedia and its sister projects while studying for his first university degree in communications. Later on, he became more interested in the culture of sharing and decided to devote more time to it.

“Upon starting my postgraduate studies, I immersed myself in studying the Remix phenomenon,” Álvarez recalls. “I started with music and sounds, but then I realized that there are other communities doing the same thing in other fields, like free software and remixing videos. I was searching for a project with a more stable community that was creating a valuable product. When I met the Wikimedia community in Mexico, I felt that it could be what I was looking for.” He continues:

Álvarez’ use of audio files has developed from “recording sounds and mixing them with music, poems, or any other sound,” to using sound as a documenting tool. A quote from the American composer John Cage has really resonated with him: “When I hear traffic, the sound of traffic—here on Sixth Avenue, for instance—I don’t have the feeling that anyone is talking. I have the feeling that sound is acting. And I love the activity of sound.”

An illustration of sound as a documenting tool can be found in Wikipedia’s article on the Church of San Marcos, where Álvarez added a recording of the church bell. The sound gave a dynamic tone to the article.

“I would like more people to upload sound files,” Álvarez explains, “with the sounds of the streets, the sounds of animals, the music they hear in the places where they live, soundscapes such as Murray Schafer … but with sounds of markets and squares. Sounds are alive and part of humanity; if we share them, we give them more life.”

Some of the pieces of music Álvarez made for projects outside the Wikimedia movement were uploaded by him to Wikimedia Commons. “I try to upload samples or several tracks that compose one musical piece to make them easier to reuse,” he explains.

So far, Álvarez has uploaded over 5,000 files to Wikimedia Commons, of which nearly 150 are audio. Different media outlets have used some of his photos, but he is frustrated that they often don’t attribute this work to him. “I write to them to rectify this, not only because I want the recognition, but to help them understand that identifying the author is part of … the culture of sharing,” says Álvarez.

To Álvarez, free knowledge sharing is not only providing an easier option for knowledge seekers; it is a way to give everyone the opportunity to stand up for their unique views.

“We have been told that we must be spectators,” says Álvarez, “when we can also be ‘spect-actors’ as Augusto Boal, founder of the Oppressed Theater, said. Being part of history is what allows us to share; and though it seems trivial, uploading a photograph that we like or a sound that evokes a feeling helps this community grow.”

Iván Martínez assisted with this profile.