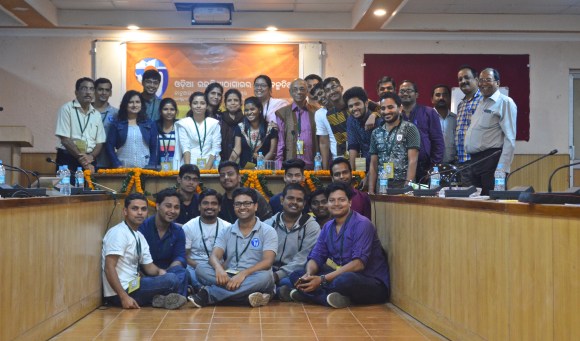 Odia Wikisource turned two in October 2016. Started in 2014, the project has over 500 volumes of text including more than 200 books from different genres and publication eras. There are about 5-10 active contributors to this project who are geographically dispersed. To celebrate the anniversary, the Odia Wikisource community is starting a batch of activities to help grow it.

On January 29, a day-long event was organized in the Indian city of Bhubaneswar, the capital of the state of Odisha, where a majority of Odia-language speakers live. The event aimed to provide training for those who wanted to learn more about Wikisource, assess the work done so far, and develop strategies for the future.

The event marked the beginning of several new community-led projects: Pothi, a project to digitize old and rare public domain Odia books; an initiative at the Utkal University library to digitize public domain books; another project that aims at digitizing palm leaf manuscripts that are hundreds of years old at a temple in Bargarh; in addition to an open-source project to record pronunciation of words for Wiktionary.

“Books like Odishara Itihasa, Ama Debadebi, Manabasa Laxmipurana, and Sabitri Osa haven’t been available on the internet,” says Wikisourcer Sangram Keshari Senapati, “even though many search for them. That makes me proud to contribute to their digitization.

“Odia Wikisource is run by Wikimedia volunteers,” explains Mrutyunjaya Kar, an administrator of the project. “This project is a storehouse of out-of-copyright books. In addition old books, we try to reach out to well-known authors and publishers with the aim of including some of their books in this free library. This way, the new generation won’t become oblivious to the invaluable pieces of Odia literature available in this digital age.” Prateek Pattanaik, a 12th-grade student in Delhi Public School Damanjodi, has started a project called “Pothi” to collect out-of-copyright and rare books and make them available in digital form on Wikisource. Many scholars and researchers joined the program.

Shree Dadhibaman Temple, a 400-year-old temple in Bargarh, a city in the Indian state of Odisha, has an archive of over 250 ancient Odia manuscripts that date back to the sixteenth century. These palm leaf manuscripts include Mahabharata, Ramayana, Skanda Purana, and the history of the temple, all in Odia.

The Odia Wikimedia community is planning to collaborate with the temple administration to organize a three-day-long digitization camp for the students of two colleges in Bhatli. Participating students will be informed about Wikisource and the digitization process and some of the temple manuscripts will be digitized during this camp. After scanning the manuscripts, the Odia Wikimedia community will help the students upload, digitize and proofread the manuscripts on Odia Wikisource.

Kathabhidhana is a community-led project to record the pronunciation of words and upload them under open licenses to be used on projects like Wiktionary. The project is led by Odia Wikimedian Subhashish Panigrahi, drawing its inspiration largely from open-source software created by Wikimedian Shrinivasan T. The source code of the software used for Kathabhidhana is written in Python and over 1,200 audio recordings have been conducted so far using the tool.

Odia Wikimedian Prateek Pattanaik is developing workflow software using a proprietary iOS-based app that can record about 5 words per minute using an iPad or iPhone to facilitate contribution to the project. More than 1,000 recordings have been added to Odia Wiktionary so far. Odia Wiktionary, which usually lacks notable contributions, has undergone some great activity by Shitikantha Dash, a sysop of the project. The project hosts over 100,000 words, mostly from Bhashakosha, a public domain lexicon digitized by nonprofit Srujanika.

Deadline for Wikimania submissions extended: Submissions for Wikimania, the annual conference of the Wikimania movement which will be held this year in Montreal, Canada, has been extended. Proposals for presentations, (lectures, workshops, roundtables and tutorials) will be accepted until 10 April, 2017 while the proposals for lightning talks, posters and birds of a feather will be accepted until May 15, 2017. More information and submitting applications on Wikimania 2017 wiki.

Fourth edition of WikiMed courses wraps up at Tel Aviv University: The Wikipedia Education Program course that started in 2013 at Tel Aviv University, has celebrated its fourth edition last January. The course has presented over 200 new articles to the Hebrew Wikipedia so far. Shani Evenstein, the Wikipedia Education Program leader in Israel wrote a post on This Month In Education newsletter about the organizer motivations and the program objectives.

Wikimedia Germany publishes 2016 impact report: Wikimedia Germany (Deutschland), the independent chapter supporting the Wikimedia movement in Germany has published their impact report for 2016. The report drops shade on the learnings and experiences from the last year with special coverage to the projects supported by the chapter. More information on Wikimedia-l.

New filters for edit review beta filter release: This week, the New filters for edit review beta option will be released on the Portuguese and Polish Wikipedias, and also on Mediawiki. The beta option adds an improved filtering interface and powerful filtering and other tools to the “recent changes” and “recent changes linked” pages. More information on Wikimedia-l.

This post has been edited to correct the reach of WikiProject Pothi.