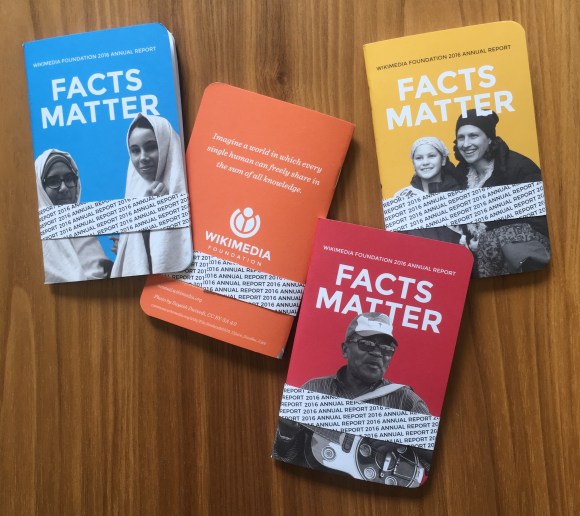 For nearly 16 years, Wikipedians have been presenting the facts. Now, we are proud to release our ninth annual report, which focuses on that important work.

As a way into our communities and our work, we offer 10 facts. They are introductions to stories about Wikimedians who document climate change, increase the number of women’s biographies, offer language and learning to refugees, or add new languages to Wikipedia.

We care about facts. Contributors work hard to systematically source and review them. Readers return to our projects to find and share them. Donors stand up to support and expand access to them. At the Wikimedia Foundation, it’s our job to backup the people who backup the facts.

Those updates are offered by thousands of volunteers writing in over 280 languages. This year, 70,000 volunteers added 5 million articles to Wikipedia, and more than 1 billion devices visited our sites—every month—to read them. We measure our impact based on the communities of knowledge we support, and the ways the world uses Wikimedia’s free knowledge projects to learn.

Fact: Most Wikipedia articles are in a language other than English.

Indeed, we have encyclopedias active in 23 languages in India alone. The vitality of these communities is supported by volunteers, Foundation staff, developers, donors, and advocates for free knowledge everywhere. An estimated 239 million people used the internet for the first time in 2016, and we intend to meet their needs by asking how they learn and what they need.

There is always more to do. Just 17% of English Wikipedia biographies are about women. We think that number should be much higher. So we are supporting and celebrating Wikimedians who want to change the ratio.

Fact: Half of refugees are school-aged.

That means more than 10 million would-be students are away from their homes, families, and places of learning. We believe that learning is a lifelong pursuit, so we look for ways to bring our free knowledge across boundaries. This year, German Wikimedians collaborated to translate phrasebooks for refugees so that newcomers to European countries could ask for the help they need.

We chose the theme “facts matter” in early October 2016 as a way to remind the world how Wikipedia works and why our movement matters. By that time, the state of fact-based information had become a highly-discussed topic internationally. We received questions from the media about how and why Wikipedia was able to avoid the fake news phenomenon, while many other companies had become amplifiers. We heard from donors about the importance of Wikipedia in a world where verifiable information is not promised. We saw, as always, an unwavering commitment from volunteer community members to presenting and verifying the facts.

When we launched the site, we received feedback from many voices in our community. There were thoughts and concerns, change requests and ideas to improve the report. It was a complex and detailed conversation and we updated the report in places to reflect this feedback

Facts are vital. Facts help us understand our world. Our contributors take pride in systematically sourcing and evaluating facts so that the world of knowledge grows, and curious readers can find original sources.

We are proud to support them.