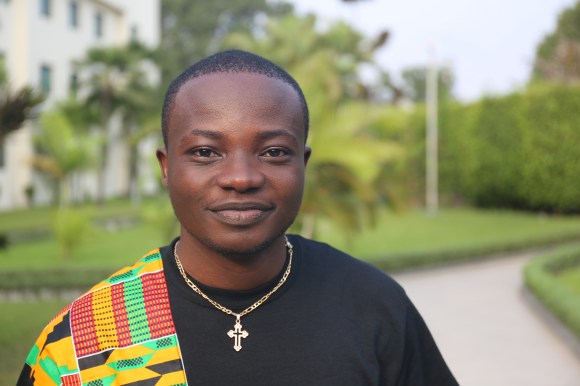 Alangi Derick comes from Buea, Cameroon. He joined the Wikimedia movement to develop his skills in coding, and was quickly hooked by the movement’s values and its community culture, eventually becoming a staunch advocate for it in his university.

As a computer science student at the time, he joined the movement a year and a half ago, and his work booked him a place at the 2016 Google Summer of Code as one of the Wikimedia Foundation’s students. Derick passed the program, helped mentor teenage participants in Google Code-in for two consecutive years, and has helped fix bugs in the MediaWiki software. He is now trying to pass this experience onto other potential contributors in his country.

In 2015, Derick was looking for an extracurricular activity where he could practice and boost his coding skills. That’s when he learned about the Wikimedia Foundation projects and their participation in Google Summer of Code (GSoC), an annual project where students spend the summer working on a free open-source project of their choice mentored by one of the participating organizations.

“I felt like I was lagging behind and wanted to explore a little bit by working on a project that will be used by millions of people,” Derick said. “With this idea in mind, I searched for open source organizations with active projects and a strong community that would be willing to help me out if I faced problems. I found that the Wikimedia Foundation and its MediaWiki project perfectly matched my skill set, so I decided to join them.”

Every year, students who wish to join GSoC can apply to participating organizations proposing a new project idea or claiming one of their ready-to-pick-up tasks. When their project is approved, they spend a whole month learning about and integrating into the community they will be working with. Starting in June, students start working on their coding projects and are mentored by the participating organization and its community.

To prepare for the GSoC, Derick talked to Wikimedia developers on their IRC channel, where they directed him to areas of need that he could work on. In a few months, Derick was able to create over 25 patches (codes that fix bugs in software) on the MediaWiki code base and its extensions.

Derick has been one of the six students to complete the program in his GSoC round and was the first African GSoC student for Wikimedia.

“I wanted to share what I learned,” Derick explained. “I found myself trying to build a Wikimedia community in Cameroon, but there was an active group supporting the activities there already. The group helps both writers and developers.”

Last January, Derick attended WikiIndaba, the regional conference of Wikipedians from the African region. The conference was another opportunity to share his thoughts on “contributing to open-source communities,” learning about “capacity building, Wikimedia grants, improving Wikipedia’s content,” and many other topics.

For the future, Derick is planning to expand his efforts to support the Wikimedia movement and its community in his country.

“Wikimedia’s goal is to make knowledge free to everyone, and this is what I want to do in my community,” he said. “I’m trying to get the knowledge to people free of charge, and this allowed me to work on software that proliferates free content.”