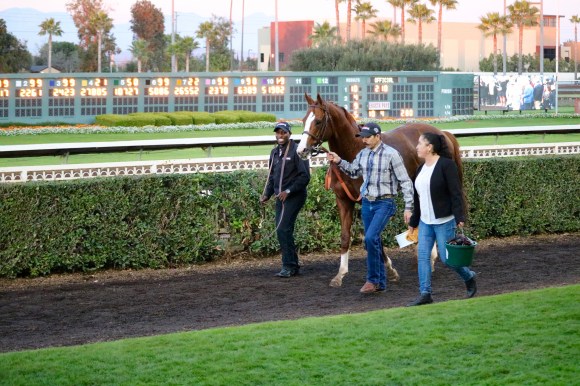 Champion race horse California Chrome with his unsung heroes, the people working behind the scenes: his exercise rider and grooms. Photo by Montanabw, CC BY-SA 4.0.

An interest in horses must be inborn. There is no other explanation, as it seems to be an illogical passion. While Jonathan Swift said, “he was a bold man that first ate an oyster,” consumers of bivalves have nothing on horsemen and horsewomen.

The first person who got on the back of a horse needed courage and a touch of insanity. The first rider may also have been the first person to take flight—one envisions a young man telling his friends, “hold my beer and watch this” as he leapt onto the back of a wild horse . . . Or, maybe romantics with visions of magic unicorns laying their heads in the laps of fair maidens had it partly right: perhaps some young girl of the late neolithic rescued a foal and created a lifelong bond.1

The “horse bug,” however contracted, is incurable and lifelong. It might even be genetic: my father, my grandfather, and my great-grandfather all worked with horses.  In any case, I have it.  And that is why I write Wikipedia articles about horses.

Growing up in rural Montana during the 1960s and 1970s, it seemed that every farm and ranch kid was issued a Shetland pony as soon as we could get on by ourselves. Shetlands are notorious for being opinionated, smart, and devious. If the pony and child didn’t murder each other due to mutual stubbornness and disinclination to follow directions, eventually the child earned the right to ride a “real”, full-sized horse.

I survived my trial by pony, and when I was nine, my father brought home a part-Arabian mare he picked up for $400. I discovered she was a granddaughter of Witez II, a stallion rescued from the Nazis by George Patton’s Third Army during WWII.2 3 4 Learning more about my mare’s famous ancestor coincidentally launched my fascination with history that ultimately led to my undergraduate degrees.5 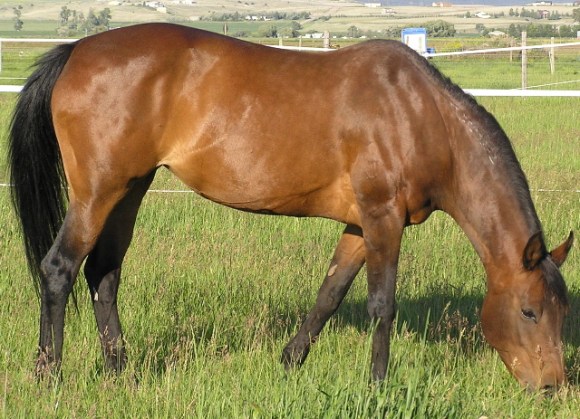 My own horses became handy models when writing articles such as Bay (horse). Photo by Montanabw, CC BY-SA 3.0.

The character of my little horse (intelligent but loyal—the complete opposite of the Shetland) gave me a permanent love for the Arabian breed. My summertime world focused on the horse show circuit of the Rocky Mountain west, where I won 50-cent ribbons riding in dusty arenas wearing long sleeves, long pants, and felt hats in 85-degree heat. I started teaching riding lessons while still in high school, began judging open horse shows as a young adult, and added horse training to my employment repertoire to help meet expenses in college.

I had two paths in front of me—horse training or a “normal” career. It seemed the smart decision was to finish college and let my day job fund my horse habit. Most horse owners in Montana are not wealthy and I was married and a parent— I’d seen too many struggling trainers living in a single-wide mobile home next to a six-figure horse barn, spending their last dime on hay and unable to pay their utility bills. My path not taken was to work with horses as a full-time professional. Instead, I chose to finish college, became a teacher and later, a lawyer.

For the next few decades, I kept one foot in the horse world (and often that foot was in a manure pile—I clean my own barn…). I owned a few horses, taught some riding students, gave clinics, judged shows, took horse photos, and never sold my saddles.

Then I discovered Wikipedia. In March 2006, I noticed the article on Arabian horses contained numerous inaccuracies and realized that anyone, including me, could edit the encyclopedia. After making four edits as an anonymous contributor, I created an account the next day.  For two months, my efforts were confined almost exclusively to the the Arabian article. I corrected errors and found friendly and experienced editors to help with the technical details. I learned how to add images, create citations, and use Wiki markup for formatting. I was, so to speak, off to the races.

Next, I branched out to other horse topics: equipment, breeds, coat colors, genetics, history, health, equestrian sport.  In July 2006, I created my first article, Cerebellar abiotrophy, inspired by a young Arabian horse affected with this genetic disease. By August, unable to find images to illustrate articles, I started uploading mine. That November, Arabian horse became my first good article.

By my first anniversary as a Wikipedian, I began to edit other topics, especially on Montana and the west. My article on Skowronek appeared appeared on Wikipedia’s main page in the “did you know?” (DYK) section, and I helped an enthusiastic young newbie get WikiProject Equine off the ground.

By 2008 I had the courage to team up with four other users on a featured article candidate, an article assessment label for Wikipedia’s best work.  Thoroughbred got the gold star, made the main page as Today’s featured article, and marked the beginning of my active involvement with WikiProject Horse racing. There I was inspired to write about people and horses who overcame the odds: Mucho Macho Man was born without a heartbeat and became a champion.  California Chrome showed us that, sometimes, the ordinary person (or horse) could win. By 2015, I was tracking the Triple Crown in real time as part of a great team of editors making the biography of American Pharoah into a featured article.

I rediscovered my path not taken through writing about horses.  Approaching my 11th anniversary on Wikipedia, I’ve topped 94,000 edits, created 250 new articles and have 60 DYK credits. I have been part of teams who developed 55 good and featured articles.  I’ve uploaded over 1000 of my own images to Commons, many of horses, but also of Montana, powwows, Yogo sapphires, horse races, and even random cellphone photos from road trips.

What I have learned by writing for Wikipedia is that we are all in this together.  I’ve met many wonderful people online and in real life.  The community and teamwork needed to make this collaborative model work has been uplifting and inspiring. I’ve honed my research skills and learned to accept input from others.  I’ve navigated some tough editing disputes and have had to examine many of my own assumptions.  Even though I’m now over 50, I’m still learning and growing. Being a Wikipedia editor is one reason why.

Wikipedia’s impact is far-reaching; I have seen Wikipedia articles I’ve worked on be mirrored and quoted, my photographs at Commons have been re-published everywhere from Cornell University to the Moscow Times.  I’ve been inspired to write freelance articles and they’ve been published. It’s been a great ride, and I’m still in the saddle.