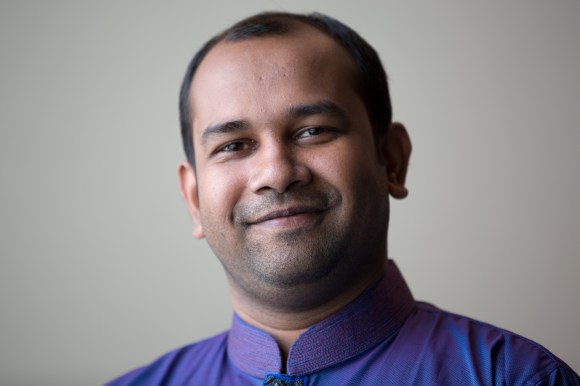 “I love Wikipedia,” Nurunnaby Chowdhury Hasive says. “It’s the only encyclopedia where I can get information in different languages and add content in my language.”

Hasive has been editing Wikipedia since 2008. In the last nine years, he has tried to add something new to Wikipedia every day, and has visited over 30 universities across his country, Bangladesh, to tell the students about Wikipedia. He has also co-organized many events to encourage people to edit, and published a style guide book about the Bengali Wikipedia. He is constantly driven to search for new ways to support the Wikimedia movement, the community of people who create and maintain the Wikimedia projects, like Wikipedia.

Hasive’s devotion to the idea of free knowledge led him to join Wikimedia Bangladesh (WMBD), an independent chapter supporting Wikimedia in his country. With the chapter, he’s helped to integrate Wikipedia Zero in Bangladesh, a program that gives cell phone users free access to Wikipedia, and organized the first-ever Wiki Loves Monuments in his country. The international contest encourages photographers to share their photos of their country’s monuments with the world, free for anyone to use.

Hasive now serves as a board member of the Bengali chapter, where he helps with communications and supports the community by coordinating large events. His previous experiences with the Bangladesh Open Source Network (BdOSN), an active volunteer group in his country, helped prepare him for the role.

“We held an anniversary program in 2015 to celebrate the Bengali Wikipedia’s tenth birthday,” Hasive recalls. It was three months long and featured two conferences, each with workshops and seminars, and various activities both online and off. With these, they were able to reach into every division of Bangladesh.

Bengali is spoken by nearly 250 million people, making it one of the most widely spoken languages in the world. With nearly 48,000 articles on Wikipedia, representing the Bengali culture on the internet feels like a national duty for Hasive.

“We have recently started work on two new projects in my country,” says Hasive. “The first one is called “Women in Wikipedia,” which aims to engage more Bengali women in editing Wikipedia (rather than just reading). The second has seen us working with a group of medical students who have shown interest in addressing the shortage of medical content on the Bengali Wikipedia.”

And in order to get his message heard by anyone interested in Wikipedia in Bangladesh, he has written a book explaining how Wikipedia works and how to edit it. He has published this book under a free license to let anyone copy and re-publish the book for free.

The time he spends helping other editors does not distract him from editing. Hasive has recently started a 100 Wiki Days challenge, where the participant commits to creating one new Wikipedia article every day for 100 consecutive days.

For his challenge, Hasive is creating and editing articles about soldiers who fought in the Liberation War of 1971, particularly those who received the Bir Sreshtho, Bir Uttom, Bir Bikrom, and Bir Protik medals that were awarded to 767 people for the role they played in the war. But for Hasive, the challenge is not limited to only 100 days. Hasive has a long-term goal of creating and developing articles about each medal recipient.

However, Wikipedia is not the only outlet for Hasive’s writings. He works as a journalist during the day and spends the bulk of his free time thinking about knowledge sharing on Wikipedia.

“My dream is to connect all people from my country with Wikipedia—people who are looking for real content. I try to recruit editors with different professional backgrounds, such as doctors, engineers, etc. They will help build a respected and legitimate encyclopedia.”