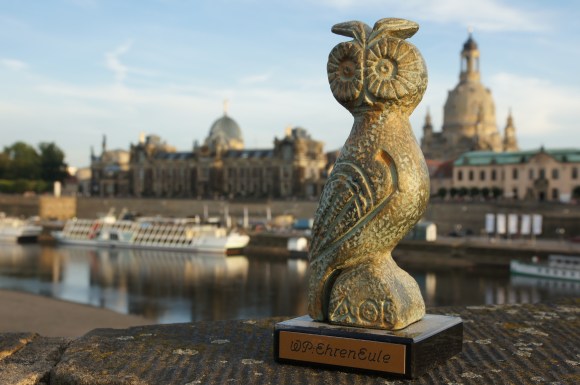 One of the German WikiEules, which inspired the Dutch Wikipedia community. Photo by Kolossos, CC BY-SA 4.0.

In a new year’s celebration event in Leiden, in the Netherlands, over one hundred Wikipedians gathered to celebrate their success stories from 2016, show appreciation to those helped make it a success, and discuss what can be improved in 2017.

During the event, the Dutch Wikipedia community awarded seven stone owl statues to community-nominated best contributors of the year:

“Our fellow Wikipedians from Germany had already chosen owls,” says Romaine, one of the main organizers of the event who had the idea and worked on implementing it on the Dutch Wikipedia. “And owls stand for wisdom and knowledge, which seems to us appropriate for Wikipedia contributors.”

The Dutch WikiUilen (WikiOwl) idea is an adaptation of the German Wikipedia’s WikiEule. Romaine saw the WikiEules being awarded to prolific Wikipedians during WikiCon 2014 in Cologne, Germany and he worked with fellow Wikipedian Taketa to make it happen. The prizes have been awarded regularly in the last two years.

Every year in November, any contributor with a minimum of 100 edits to Wikipedia articles can nominate any other user to get an owl. The community reviews the candidate contributions and sends in their votes, on a secret ballot, to a special account the organizers manage.

“To ensure neutrality, we have excluded ourselves completely,” Romaine notes. “We can’t nominate, we can’t vote and we can’t be nominated.”

In January, candidates attend the award ceremony without knowing who the prizes will be awarded to. When the names are announced, WikiOwl holders from the previous year call the selected candidates’ names and hand them the owl statues. In case last year’s holder can’t make it to the event or is nominated again, another Wikipedian takes their place in dispensing the award. The surprise factor, in addition to the effort made to make contributors feel appreciated, plays a vital role in this process.

“Without recognition, people may lose their motivation and quit editing.”

Wikipedia Day 2017: On the 15 January, celebration events were held in different cities around the world to mark Wikipedia’s 16th birthday. Wikipedians, educators, students and supporters of the projects were there to mark Wikipedia’s anniversary. Read more about Wikipedia day on Wikipedia. Photos from the events held in eight countries are available on Wikimedia Commons.

New MediaWiki extension created by a student: Harri Alasi, a student at Tartu University in Estonia has created a new extension on MediaWiki, the free open-source software used on Wikimedia projects and other websites. The new extension enables users to view and manipulate 3D objects in STL format.

Phabricator updates: On Phabricator, the platform used by Wikimedians to track bug reporting and software development, static items in the top bar’s dropdown menu have been replaced by “Favorites,” where a user can adjust their preferred links.

AffCom welcomes new members: The Wikimedia Affiliations Committee (AffCom), the body charged with advising and recommending the recognition of new movement affiliates, has announced its new members. Camelia Boban, Kirill Lokshin and Satdeep Gill will serve as members of the committee for 2017–19.

Iraqi Wikimedians kick off a series of editing workshops in Baghdad: Last week, the Iraqi Wikimedians user group held a new editing workshop in Baghdad on the editing basics for new users in the Iraqi capital. Over the past year, the user group organized several introductory workshops in the city of Erbil before heading south to extend the effort to Baghdad.