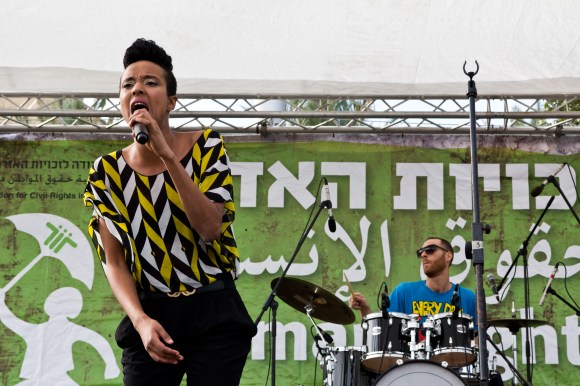 Ester Rada, an Israeli musician who now has an article on the Spanish Wikipedia. Photo by Oren Rozen, CC BY-SA 3.0.

Seven months ago, I was looking for a new job.

With little else to do after applying for a new one, I browsed Facebook, where I saw Wikimedian friends posting with #100wikidays.

I quickly discovered that the hashtag referred to a challenge undertaken by Wikipedians to write one new article each day for a hundred days. It was the brainchild of my Bulgarian colleague Spiritia, who only a month earlier was the runner-up Wikipedian of the year for coming up with it.

To release the stress of the job hunt, I decided to do it—but my way, by writing articles about Jewish women on the Spanish, Portuguese, English, and Ladino Wikipedias.

I started with a woman from Venezuela, the country I was born in: Margot Benacerraf, a movie director of Moroccan-Jewish origin who received the Cannes Prize in 1959. Who could imagine that in the late 50s, a young woman from a country little-known to many would capture the attention of critics at the Cannes Festival? Benacerraf is now considered the mother of the Venezuelan cinema, founder of the National Cinematheque.

During these 100 days, I spoke much about these women, telling their stories to everyone who asked about them. One day, I came across an article about a semi-legendary queen in Ethiopia that ended the Axum dynasty, crowned herself, and set the churches of Abyssinia on fire. I asked an Ethiopian friend about her, who immediately replied “Esato? She burned Ethiopia, killed the princes, and took all their gold!”

I don’t know if it’s a legend or not, and neither do historians, but my friend sounded very excited to tell me about her. And now we have an article about Gudit!

On every one of my hundred days, I spent time on the internet looking for another notable Jewish woman whose life would catch my attention. Some were so impressive that I needed to create them on the spot.

One was Caterina Tarongí, who was burned alive by the Spanish Inquisition. Her words to her brother on the way to the auto-da-fé have survived through folk songs and expressions. Another was Raquel Líberman, born in Poland, who declared in publicly denouncing and breaking a Argentine human trafficking network that specialized in Jewish women that “I can only die once, I won’t withdraw the complaint.” The organized network was comprised of over 30,000 women over a seventy-year period.

At some point, I started searching for interesting Jewish women in other language Wikipedias, looking to spread awareness of these people across national and linguistic borders. The one that interested me most was Violeta Yakova, a Bulgarian resistance fighter during the Second World War. Along with two fellow Jews, Yakova killed well-known anti-semites and Nazi informers. The only article about her was in Bulgarian, but after I translated her article into English, other participants in the challenge translated it into seven more! When things like this happen, you get this feeling of accomplishment, of not just contributing to the expansion of free knowledge, but also of engaging other people do it with you as well. It’s a win-win situation.

#100wikidays also gave me the opportunity to interact with other Wikipedians, many of whom I had never met before. Out of these, one of the most remarkable colleagues I befriended in this experience has been Mervat Salman. Mervat lives in Amman, Jordan; I live in Jerusalem, a religious Jew who became an Israeli citizen at Ben-Gurion Airport.

At first sight, one would only focus on our differences. But there’s more: we both work in the IT industry, we both like Middle Eastern food and music and—the most important thing—we both believe in freedom of knowledge and the need to make it accessible for everyone.

After I finished the challenge, I was exhausted. #100wikidays took up a good deal of my time over those one hundred days, but it was satisfying and completely worth the effort.

But I couldn’t rest for long. Only days later, Mervat started asking me if I wanted to take on the #100WikiCommonsDays challenge—like #100wikidays but with pictures. Since I didn’t start immediately, she asked again, and again … until I started uploading photos to Commons. And here I am, halfway through it!

Inspiration is essential in life. I was inspired by all these 100 women, and I hope others will be too.