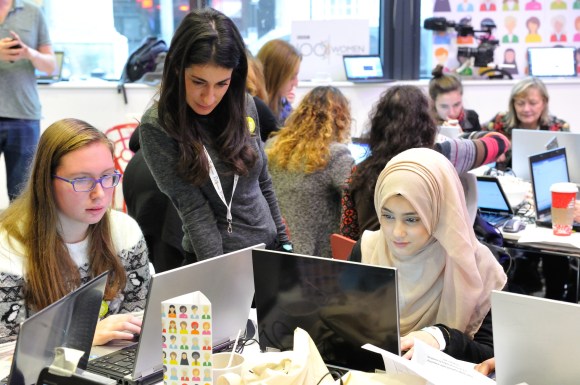 On 8 December 2016, Wikimedia communities around the world held a multi-lingual, multi-location editathon in partnership with the BBC to raise awareness of the gender gap on Wikipedia, improve coverage of women, and encourage women to edit.

In the UK, events took place at BBC sites in Cardiff, Glasgow, and Reading, in addition to the flagship event at Broadcasting House in London; while events took place around the world in cities like Cairo, Islamabad, Jerusalem, Kathmandu, Miami, Rio de Janeiro, Rome, Sao Paulo and Washington DC. Virtual editathons were organised by Wikimedia Bangladesh, and by Wikimujeres, Wikimedia Argentina and Wikimedia México for the Spanish-language Wikipedia. Women in Red were a strategic partner for the whole project, facilitating international partnerships between the BBC and local Wikimedia communities, helping to identify content gaps and sources, and working incredibly hard behind the scenes to improve new articles that were created as part of the project.

The global editathon was the finale of the BBC’s 100 Women series in 2016 and attracted substantial radio, television, online, and print media coverage worldwide.

The events were attended by hundreds of participants, many of them women and first-time editors, with nearly a thousand articles about women created or improved during the day itself. Impressively, Women in Red volunteers contributed over 500 new biographies to Wikipedia, with nearly 3000 articles improved as part of the campaign. Participants edited in languages including Arabic, Dari, English, Hausa, Hindi, Pashto, Persian, Russian, Spanish, Thai, Turkish, Urdu and Vietnamese, and were encouraged to live tweet the event using the shared hashtag #100womenwiki.

The online impact of #100womenwiki was significant, however of equal importance was the media coverage generated by the partnership. The BBC has a global reach of more than 350 million people a week, so this was a unique opportunity to highlight the gender gap, to raise the profile of the global Wikimedia community, and to reach potential new editors and supporters. In the UK, I was interviewed by Radio 5Live and Radio 4’s prestigious Today programme, while my colleague Stuart Prior and I appeared on the BBC World Service’s Science in Action programme. Dr Alice White, Wikimedian-in-Residence at the Wellcome Library, was also interviewed by 5Live and Jimmy Wales came to Broadcasting House to be interviewed by BBC World News, BBC Outside Source and Facebook Live. The story was featured heavily on the BBC’s online news coverage on 8th December—with an article by Rosie Stephenson-Goodknight that you can read here–and the project was covered by the Guardian, the Independent, and Metro in the UK, and other print and online media across the world. 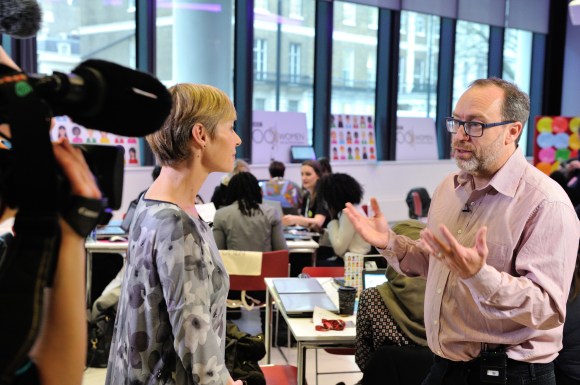 Jimmy Wales, founder of Wikipedia, being interviewed at BBC 100 Women. Photo by the BBC/Henry Iddon via Wikimedia UK, CC BY-SA 3.0.

The partnership with the BBC would not have been possible without the vision and energy of Fiona Crack, Editor and Founder of BBC 100 Women. After the events I spoke to her about what had been achieved and she reflected on how the combined reach and audience of the BBC and Wikimedia inspired and engaged people interested in women’s representation online. She commented “It was a buzzing event here in London, but the satellite events from Kathmandu to Nairobi, Istanbul to Jakarta were the magic that made 100 Women and Wikimedia’s partnership so special”

Clearly a project like #100womenwiki, focused on a single day of events, could never be a panacea for the gender gap on Wikimedia. After all, this is a complex issue reflecting systemic bias and gender inequality both online and in the wider world. With more lead-in time and resources, the partnership could have been even more successful, involving more Wikimedians and engaging and supporting more new editors.

However, events and partnerships like these demonstrate that the gender gap is not an entirely intractable issue. Within the global Wikimedia community, there are a significant number of people who are motivated to create change and willing to give up their free time contributing to Wikipedia and the sister projects, organising events, training editors and activating other volunteers and contributors in order to achieve it.

As the Chief Executive of Wikimedia UK—committed to building an inclusive online community and ensuring that Wikipedia reflects our diverse society and is free from bias—this is inspiring, encouraging, and humbling.

This post was originally published on Wikimedia UK’s blog; it was adapted and lightly edited for publication in the Wikimedia blog.