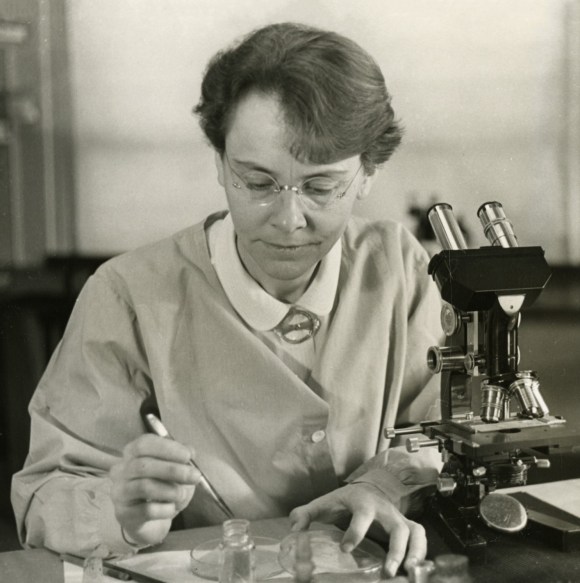 One of our best stories of the year focused on Emily Temple-Wood’s effort to increase Wikipedia’s coverage of women scientists. One of her favorites is Barbara McClintock (above), a 1983 winner of the Nobel Prize. Photo from the Smithsonian, public domain.

On July 28, we announced a redesign of the Wikipedia Android app, with the aim of helping people find needed information along with “interesting, recommended Wikipedia content to dive into when you have a bit of spare time.”

But unlike last year, the majority of our most-viewed posts were not Wikimedia Foundation announcements. That honor went to community contests—the Commons photo of the year and the winners of Wiki Loves Monuments—and factual lists, with the most-edited articles in the English Wikipedia’s history and in 2015.

Much of the rest of the list comes from highlighting unique people or unusual history from Wikipedia. The impact of Prince’s death on Wikipedia told the story of why a MediaWiki extension, nicknamed the “Michael Jackson problem,” kicked in after an extreme combination of edits and pageviews. The twentieth anniversary of Pokémon gave us the opportunity to tell a bit of history, given the game’s influence on the English Wikipedia’s notability policies. And the new alchemy highlighted Emily Temple-Wood, who would later become a Wikipedian of the year, and her efforts to match bouts of online harassment with new articles on women scientists. This post garnered much press coverage, including from the Washington Post and BBC News.

Less seen, but no less important, were the extensive interviews and profiles of Wikipedia editors we’ve done this year. Peter Isotalo has written articles on sunken warships that have been since raised back to the surface. Habib M’henni hosts workshops and takes photos for Wikimedia Commons. Mervat Salman focuses on narrowing Wikipedia’s gender gap. Diego Delso has contributed more featured pictures to Commons than anyone else. TrueHeartSusie3 and Loeba, both pseudonymous usernames, rewrote the article on Charlie Chaplin. Albin Olsson has photographed the last three Eurovisions and released all of his images under free licenses. Sara Mörtsell works with educators in Sweden to introduce them to Wikipedia. Gary Greenbaum chronicled the late Antonin Scalia.

We’ve also ramped up our community digest, which aims to condense recent Wikimedia news from around the globe into one readable piece. Our archives have pieces on events like Wikipedia Asian Month to the Estonian presidential election, CEE Spring contest, and Wiki Loves Africa, along with ‘brief notes’ that summarize other happenings. If you have Wikimedia news that should be included, either as a main story or as a short brief note, send us an email at blogteam@wikimedia.org.

Last, we’ve been slowly adding pieces to our “Why I” series, which aims to let Wikimedia editors tell the world about what motivates them to contribute to Wikimedia sites. This post is well exemplified by Sonja N Bohm’s “Why I proofread poetry at Wikisource,” where she discussed what motivates her to contribute: bringing a single little-known poet’s work back to life.

Thank you for reading the Wikimedia Blog. We’ll see you next year.