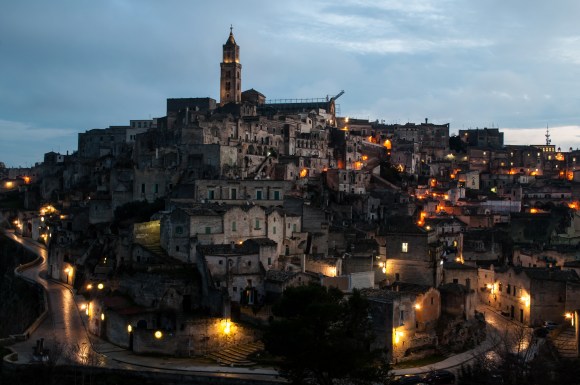 The famous Sassi di Matera in Italy; the steeple at the top belongs to the Matera Cathedral. Photo by Crispino87, CC BY-SA 4.0.

One of the photographers in the world’s largest photo competition submitted 16,507 photos this year. Another photographer submitted half of one photo: She took and submitted it with her boyfriend. The subjects include an artistic capture of the Taj Mahal which, according to its caption “seems to wake up, out of the mist.” But also a little white gazebo on a family estate in Russia, humbly popping up out of greenery.

Wiki Loves Monuments drew 277,365 entries from 10,748 participants this year, the largest pool of submissions of any photo competition. Volunteers go through all of those, first on the national level, then for the global finals. The top 15 photos—winnowed all the way down from the more than a quarter-million—will be announced next week.

Like Wikipedia, Wiki Loves Monuments is a sprawling enterprise filled with fascinating diversity. Winners represent the world’s best photos of the cultural heritage in 42 nations. Museums and observatories, old mills and modern architecture. If Wikipedia is the story of the world, Wiki Loves Monuments could well be its most beautiful slide show. 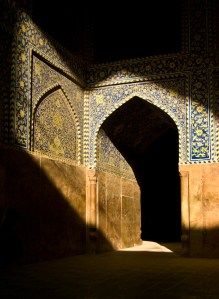 Shah Mosque in Iran. Regarded as one of the masterpieces of Iranian architecture, it was completed in 1629. Photo by Forough Abadian, CC BY-SA 4.0.

The contest, started in 2010, judges photos submitted via Wikimedia Commons, the 36 million-file media repository for the Wikimedia movement. The photos illustrate articles about countries’ national monuments on Wikipedia, and are freely licensed for everyone to appreciate. In fact, one of the main criteria for judging is “Usefulness of the image on Wikipedia.”

Last year’s top winner was of a pristine orange and white lighthouse towering above an expanse of flat green German fields. It earned photographer Marco Leiter a voucher worth $1000.

The United States has the most entrants this year, with 11,277. Antarctica has 13. Every nation has its own 10 winners who compete at the global level. As the photographers capture natural treasures, they invest something of themselves.

The photographer Tilman2007 of Germany, who submitted 16,507 photos this year, has submitted 46,352 to Wiki Loves Monuments since 2011 and 102,875 to Wikimedia Commons in total with the help of uploading programs. Francesca, the Italian entrant, submitted a glowing photo of the Church of Santa Maria De’ Armeniis in Matera, which she focused on with a collaborator. She only takes photos with her boyfriend; it is entirely a labor of love. (Wiki Loves Monuments entrants sometimes prefer to use their Wikimedia user names for reasons of privacy and personal preference.)

Gastão Guedes has been photographing his native Brazil for more than 40 years. When he was 8, his family gave him his first camera: a Kodak Pocket Instamatic 200. With it he shot pictures of his cousins, of family trips and school trips. Now he is a professional photographer who is a finalist in Brazil’s Wiki Loves Monuments judging this year. “I am proud of my country for its architectural heritage and for its nature. I want to keep photographing even after my retirement,” he says.

Forough Abadian took one of Iran’s top photos for this year’s contest back in 2007. On a family trip she wandered the Shah Mosque in Isfahan, camera in hand, a 16-year-old seeking a new view of an 11th century mosque. “I played around with the light and took many photos,” she says. Suddenly, she saw it: The arch of a Persian door, intricately blossomed with orange flowers, in stark light and shadows. Click. 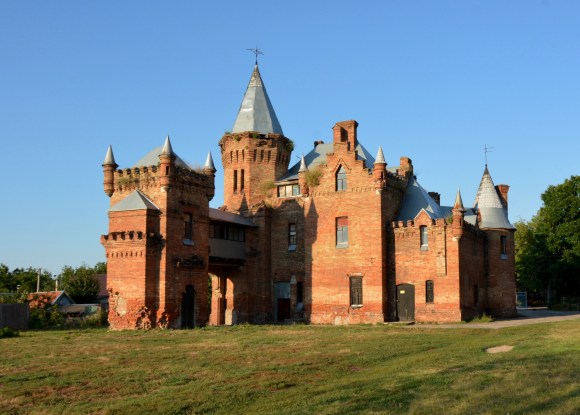 Popov Castle in Ukraine. Built by the grandson of an Imperial Russian general, it was ruined in the Second World War and restored in the 1990s. Photo by Nataliya Shestakova, CC BY-SA 4.0.

Nataliya Shestakova, a finalist in the Ukraine Wiki Loves Earth contest, travels the backroads of her country, capturing the historic hidden treasures of small towns. In the past three years she has captured 2740 different Ukrainian monuments. “I just can’t imagine myself enjoying lying on the beach,” she says. In fact, she has hitched a ride in a dump truck, ridden in a Jeep through a former battlefield, and tromped into farmhouses to get a shot through a family’s window.

She sees the contest as an invitation “to travel, visit, see more in Ukraine, to be interested and learn about, to communicate and distribute new knowledge and impressions of the country.”

The winners in the world’s largest photo contest will be announced next week; Wiki Loves Monuments’ international jury will announce the top 15 photos out of 277,494 entries from 42 countries. For more information, go to www.wikilovesmonuments.org.