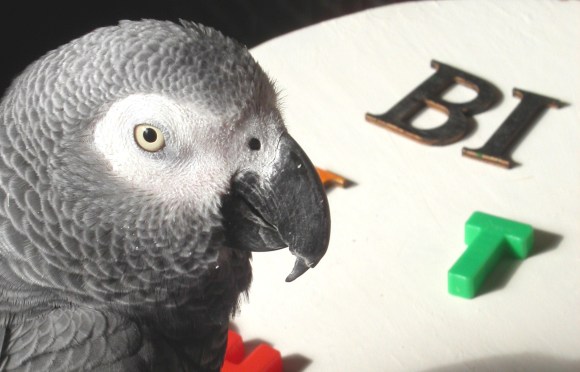 Alex was a parrot with extraordinary abilities. His mental performance and communication skills changed how scientists and the public look at animal intelligence.

For three decades beginning in the late 1970s, Alex was the center of increasing media attention. Nature documentaries featured him answering questions, distinguishing between different colors and shapes, doing simple math, and verbally expressing emotions of love, anger, and boredom. His lifetime trainer, Dr. Irene Pepperberg, reported that his intelligence “is comparable to that of a five-year-old human while his emotional maturity is that of a two-year-old.”

Pepperberg is an animal psychologist who spent thirty years conducting an experiment on Alex. She bought the one-year-old African grey parrot from a pet store in 1977 “with the intent to study his cognitive and communicative abilities,” as she told the Wikimedia blog. She picked his name as an acronym for ‘avian language experiment’.

Some parrots can mimic human speech, but Alex’s use of language was an unusual case, as his Wikipedia page describes it: 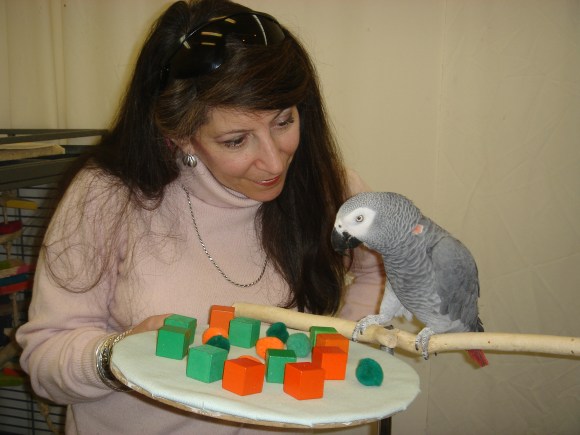 Pepperberg with Alex, photo courtesy of the Alex Foundation.

Pepperberg used a specially designed training technique based on a rival model. In this approach, one of the researcher’s assistants acted as a rival student for Alex. When the rival student answered a question correctly about an object, they received that object as a reward, which encouraged Alex to accomplish a similar achievement to get the reward.

“It is the only way that they can make the direct connection between the object and the label that they have used,” Pepperberg explains. “The reason other training techniques failed is because the trainers did use food rewards, and because the subjects got the same food reward no matter what they said, they never learned to understand the meanings of their labels.”

He was able to articulate his emotions without being trained. When he made a mistake, he would say “I’m sorry”, and when learning bored him, he would say, “Wanna go back.” Sometimes, if they insisted on keeping him, he would play a trick to flee the class:

“He may have been bored,” says Pepperberg. “But what he did was to figure out how to manipulate me into asking the question he wished to answer (showing an important level of awareness).”

Training Alex was not an easy process. Pepperberg spent years looking for grants to fund her research. Most of her grant requests were rejected as none of the grantmakers believed in the feasibility of working on communication with animals. And there were disbelievers. Some in the scientific community were skeptical of Pepperberg’s findings, pointing to Alex’s communications as operant conditioning, or rewarded behavior. But his intelligence was well-documented. Alex was the main subject of Pepperberg’s work. She wrote a few books about her experiment and recorded her findings in dozens of papers in peer-reviewed journals.

On September 6, 2007, Alex died at the age of 31, half the average lifespan of African grey parrots. Although he knew 100 words, the last words spoken by perhaps the most intelligent bird ever studied were predictable. He gave his customary farewell to Pepperberg as she left him each night:

“You be good. See you tomorrow. I love you.”

You can read more about Alex in Wikipedia’s article about him.

“Wait, what?” is a recurring series on the Wikimedia blog, bringing you some of the weirdest and unique topics that have been covered by Wikipedia’s editors. If you would like to write one, please contact blogteam@wikimedia.org.

This post has been updated with additional information from Dr. Irene Pepperberg.