Photo by Sport the Library via the Australian Paralympic Committee, CC BY-SA 3.0. 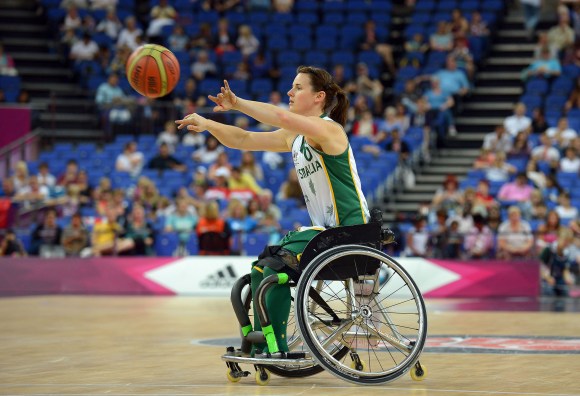 A recurrent problem with sports on the web is that the webpages tend to have short lives. Profiles of player and athletes are inevitably replaced with ones of the current rosters, and accounts of bygone competitions and events get deleted. The HOPAU Project—established by the Australian Paralympic Committee (APC) as a way of connecting the Australian Paralympic movement with its heritage—was aware of the ephemeral nature of web pages, and sought a more lasting digital presence.

So in 2011, the HOPAU Project turned to Wikipedia. 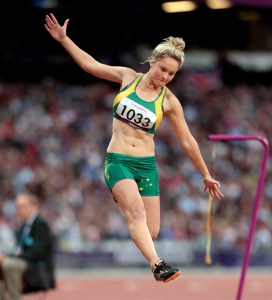 A meeting was set up with John Vandenberg, the then-president of Wikimedia Australia, and a workshop was run in Brisbane. Wikimedia Australia would work with the HOPAU Project as a GLAM (Galleries, Libraries, Archives, and Museums) initiative.

I was one of the Wikipedians invited to attend the workshop. I have a PhD in military history, and was active in the Military History Project, but had no experience writing about Paralympic sports. At the time, I had no idea that it would occupy much of my spare time in the next four years.

Subsequent workshops were held in Canberra, Sydney, Melbourne, Brisbane, Adelaide, and finally, in November 2016, in Perth. The one in Adelaide in August 2016 was particularly memorable for the recovery of film footage of early Paralympic games, which was digitised and uploaded. The original footage was deposited in the National Film and Sound Archive.

At this point, there wasn’t much about the Paralympics on Wikipedia. In the lead up to the 2012 Games in London, the Wikipedia HOPAU Project created 288 articles on the English Wikipedia for the event, which received 1.9 million page views during the games. This far exceeded the number of page views of the web pages of the APC, or the ABC, the official broadcaster.

An important component of these pages is images from the APC’s collection of still photographs, transparencies and negatives. The APC agreed to release photographs of no commercial value under Creative Commons licences. By November 2016, some 2,700 had been uploaded to Wikimedia Commons.

I was fortunate enough to be selected as one of the two Wikipedians in attendance at the London Games with journalist credentials, allowing me to view every event, taking advantage of the media transport system and the internal games web pages. 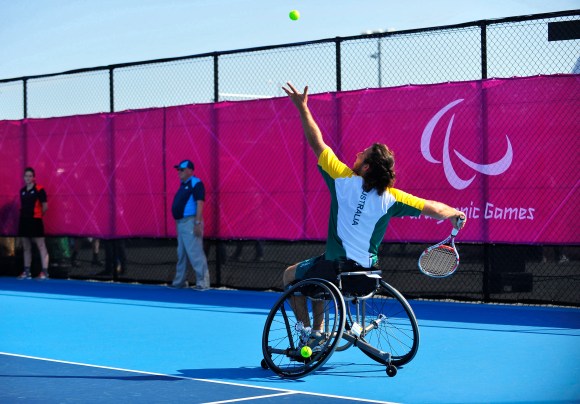 Between the London and Rio Games, funding dried up, with the APC suffering severe cutbacks from the government, and Wikimedia Australia was de-funded by the Wikimedia Foundation. Fortunately, additional funding was provided by the National Research Council. The HOPAU Project continued. I travelled to the United States in 2012 to interview our Winter Paralympians, and followed our women wheelchair basketball players to Bangkok in 2013 for the Asia-Oceania Zone championships, Toronto in 2014 for the World Championship, and Beijing in 2015 for the Women’s U25 World Championship.

In addition to working with our Australian Paralympians, I took the opportunity to produce articles on wheelchair basketball players from other countries. I started with the Germans, getting people from WikiProject Germany to translate my articles into German for me. I also produced articles on the Canadian and British players.

In the run up to the Rio Games in 2016, we didn’t have a full-time Wikipedian in residence, so we needed to distribute the workload as much as possible. Sports and journalism students from the University of Canberra were detailed to write articles on the athletes as part of their courses, and 67 articles were created between April and September 2016. With the expulsion of Russia, several athletes were selected at the last possible minute.

Articles created as part of HOPAU Project received 1.6 million page views during the games, less than London, but still outstripping traffic on the APC and official broadcaster pages. Once again, the most popular were the articles on classification. 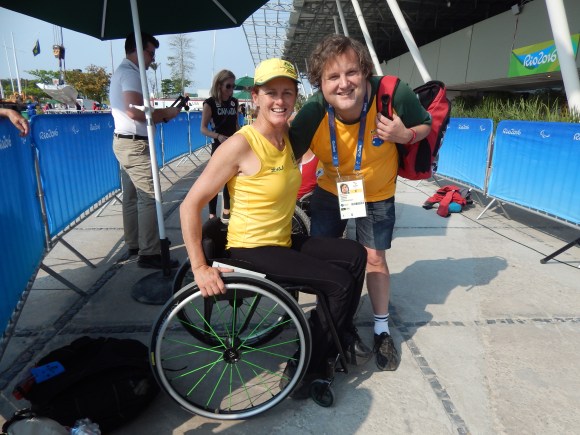 The author with Liesl Tesch. Photo by Sport the Library via the Australian Paralympic Committee, CC BY-SA 3.0.

I attended the 2016 Rio Games as an accredited journalist for Wikimedia Australia, and based myself at the main venue at Barra de Tijuca. The work day was long, with sports morning, noon, and night. I would update the Australia at the 2016 Summer Paralympics article at lunch time. During the games, this was one of the most edited articles on Wikipedia. Indeed, the articles on several countries at the games made the most edited articles list, topped by Great Britain. Where we differed was in being more organised.

As the on-site Wikipedian, I could chase up information. If we were unsure who was in a photograph, I could go over to the Paralympic village and ask. If we needed a photograph of a particular sport, event or athlete, I could get one. During August, September and October, I ran up 4,300 edits, took 700 photographs, and created 269 articles, running 22 of them on the front page in the Did You Know? section.

The Rio 2016 site is scheduled to disappear in March 2017, when the legal entity dissolves. Moving information to Wikipedia not only preserves the record, in many cases it also triggers the archiving of the original pages.

By November 2016, the HOPAU Project had created over 1,000 articles on Wikipedia—a lasting legacy.