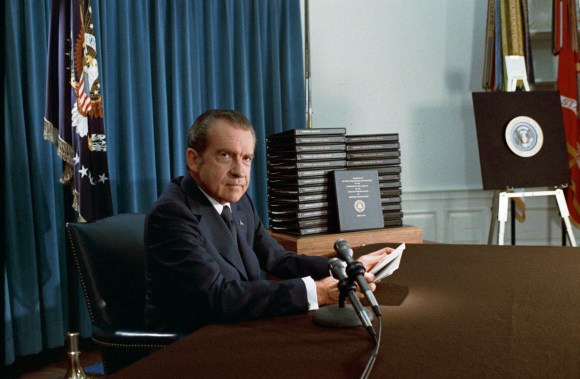 Photo via the National Archives and Records Administration, public domain/CC0.

Nixon’s resignation was forced by the Watergate scandal, where Nixon was associated with a break-in at the opposing Democratic Party’s headquarters and a subsequent cover up of his administration’s involvement,.

Less known, however, are his first two campaigns for federal office. In 1946, Nixon ran for the House of Representatives; four years later, he ran for the Senate. Both campaigns were “characterized by accusations and name-calling,” as the latter’s Wikipedia article puts it. 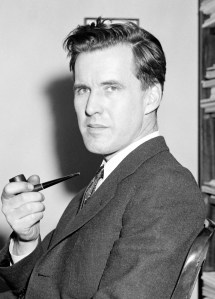 In 1946, Nixon ran his first federal campaign against Jerry Voorhis, a five-term incumbent Democrat. Nixon, a lieutenant commander in the US Navy at the time, was chosen by a committee in the district that was formed with the express purpose of defeating Voorhis. “His ‘conservative’ reputation must be blasted,” Nixon said at the time. “But my main efforts are being directed toward building up a positive, progressive group of speeches which tell what we want to do, not what the Democrats have failed to do … I’m really hopped up over this deal, and I believe we can win.”

Instead, the campaign became a prime example of red-baiting, the political strategy of linking an opponent with Communism. In the campaign’s first debate, Nixon was able to tar Voorhis by associating him with an endorsement from a group Voorhis was not aware of, and whom Nixon charged had the same board of directors as a group widely seen as being a Communist front. The pall of this confrontation hung over the rest of the election, with Nixon using it in subsequent debates, campaign literature, and ads.

Nixon ended up winning the election, and Voorhis carried a grudge against Nixon for the rest of his life. In 1972, Voorhis published The Strange Case of Richard Milhous Nixon, in which he wrote that Nixon was “quite a ruthless opponent” whose “one cardinal and unbreakable rule of conduct” was “to win, whatever it takes to do it.” In another outlet, he stated,, “Sour grapes to criticize the man who beat me, but I just wouldn’t be human if I said I liked spending the second half of my life as ‘the man who Nixon beat.'” After Nixon resigned, Voorhis quipped, “Here is the philosophy of doing-anything-to-win receiving its just and proper reward.” 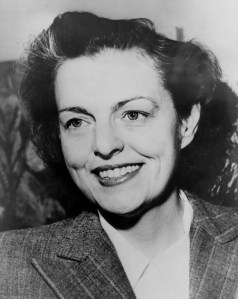 Helen Gahagan Douglas. Photo via the US Congress, public domain/CC0.

In 1950, Nixon ran for one of California’s two Senate seats against fellow Representative Helen Gahagan Douglas, the third woman ever elected to the US Congress. Nixon’s campaign was once again characterized by red baiting, though this was not unusual in an era characterized by the “Red Scare.” They distributed a “Pink Sheet” that accused Douglas of voting in league with Vito Marcantonio, a democratic socialist politician who had been embraced by Communist groups in the United States.

Douglas struck back by comparing Nixon to Nazism, calling him “a young man with a dark shirt” and running advertisements stating that “HITLER invented it/STALIN perfected it/NIXON uses it.” Nixon responded by continuing to conflate Douglas with being soft on Communism.

Nixon won the election with a nearly 60-40 split in the electorate. An early Nixon biographer characterized the race by writing, “Nothing in the litany of reprehensible conduct charged against Nixon, the campaigner, has been cited more often than the tactics by which he defeated Congresswoman Helen Gahagan Douglas for senator.”

You can read more in Wikipedia’s featured articles on the United States Senate election in California, 1950 and Richard Nixon.