This article is available in: English Język polski 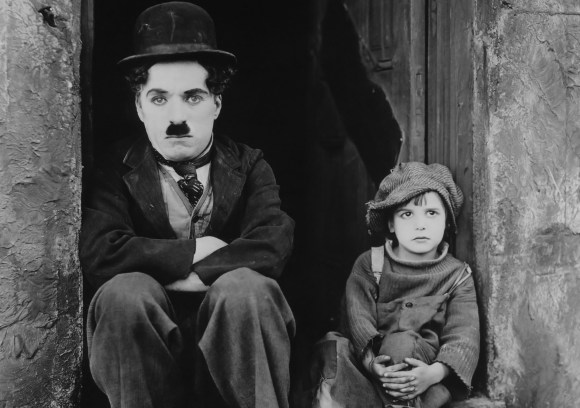 The first audiences jumped and shouted when pictures began moving on screens in front of them. It seemed like magic—and movies were, almost magically, invented and improved by different people in different parts of the world at the same time.

Movies still flicker with magic in the hearts of many.

For me, movies have always been evocative, conjuring laughter, suspenseful intrigue, and compassionate sorrow as I sat in the dark. Growing up in Poland, I watched movies from my homeland and around the world.

Now I’d like to share some of that knowledge and enthusiasm with you, to connect about one famous and one little-known film. A double-feature of ‘Wikipedia goes to the movies,’ if you will.[Citation, and popcorn, needed]

Introduced as a picture with a smile and (perhaps) a tear, The Kid (1921) was the first full-length movie by Charlie Chaplin. It is one of the masterpieces of the silent-film era. The story is about a little boy, abandoned by a poor and desperate mother and adopted by the Tramp. As a filmmaker Chaplin goes back to his own childhood in London of gritty poverty, crime both mischievous and menacing, and authority both unsympathetic and watchful. Maybe this autobiographical factor helped Chaplin to create a film so very touching, mixing heartbreak and laughter. I laughed—as did the world two generations before me—when I first watched The Tramp’s attempts (at the same time funny and charming and touching) to change every day objects (a chair, a jug, some ropes) into a machinery which would somehow taking care of the baby easier.

Another of the movie’s highlights is a stunning performance by Jackie Coogan, a child actor playing the Tramp’s little companion. After The Kid, Coogan built a life-long and versatile acting career, even becoming Uncle  Fester in The Addams Family television series of the 60s. The actor is also known for inspiring the Coogan act, an early law protecting child performers.

And while many may think that silent movies are long-forgotten oldies, Wikipedia statistics prove that this is not the case with The Kid. Articles about this picture are in almost 40 languages of the online encyclopedia (including Ukrainian where it has a status of a Good Article), and are read by thousands of readers every day. If this blog post made you interested in the movie you will be happy to know that Wikimedia Commons brings you beautiful photos from the picture (including a frame from perhaps one of the most touching scenes in movie history—the scene of the little boy being taken away from his caregiver and friend by social workers).

Commons has the whole movie, so you can watch it, feel moved and inspired, and use that as motivation to edit an article in your language’s Wikipedia.

Far less famous, The Night Train may be one of the best Polish movies. It takes place in a crowded overnight train going to the seaside. At the beginning the movie seems to be a psychological thriller with a very Hitchcockian atmosphere—the newspapers write about a wife murderer on the loose and the viewer gets the feeling that the killer is in fact somewhere on the train. But very soon one discovers that this criminal plot (a hiding criminal, a police investigation, a chase) is not what the movie is really about. Minute after minute, like train cars pulling through a tunnel, stories of the other passengers pass by. Each of them (a neglected wife, an concentration camp survivor, an old priest, a middle-aged conductor) carries a unique and textured loneliness.

The most important characters are Jerzy and Marta, strangers who by accident share a sleeping compartment. Their involuntary intimacy uncovers dark secrets for them both—and new light of hope. “Everyone wants to be loved, but no one’s ready to love,” says Marta. The thriller has fooled us, slowly settling down next to us in the dark, a confidante to share our longing and vulnerability.

What adds weight to the movie are magnetic performances by two of the greatest Polish actors, Leon Niemczyk and Zbigniew Cybulski. The latter, called the Polish James Dean, died after falling under a train some years after The Night Train. The atmosphere is also enhanced by a jazz score, quite popular in Polish movies at that time, and incredible cinematography. And while this movie is in so many ways unique it is still not well covered in many language versions of Wikipedia.

Watch it, feel it, confide with it in the dark. Then bring that inspiration to your Wikipedia, where The Night Train probably needs an article.

What are your favorite world-famous and little-known movies? Tell us about that double-feature in “Wikipedia goes to the movies.”