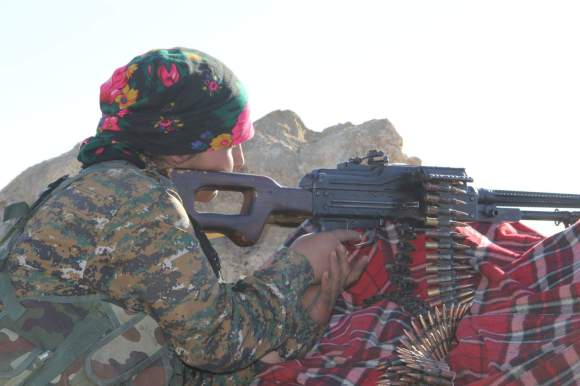 Mosul, the second biggest city in Iraq, fell into the hands of ISIL over two years ago. That forced over 500,000 people, nearly a third of the city’s population, to flee their homes seeking security away from the Jihadist group. Today, the city is considered ISIL’s last bastion in the country.

On Monday, Iraqi-led forces began a military operation to retake the city from ISIL. The forces include allied militias, Kurdistan and international forces in the largest deployment of Iraqi forces since the invasion of Iraq in 2003.

Nine hundred civilians fled the city during the first 2 days of the battle with escalating fears that the roads might be booby-trapped and civilians might be used as human shields by ISIL.

Wikimandia, a Wikipedia editor from California, was following the news about the battle when it started. She was watching the live streaming of the battle on the internet and reading the comments from around the world on social media websites when she decided to join the news-making process by creating an article about the battle on Wikipedia. This was her first time writing an article about a military operation since joining Wikipedia 10 years ago.

“It was late at night for me on Sunday/early Monday when it started, and I was so drawn in I stayed up all night,” says Wikimandia.

Nearby observers and soldiers started posting the news of what was happening in front of them on social media, but user Wikimandia had to wait until some reliable sources were available. The first confirmed news for her was a tweet from the Iraqi prime minister announcing that the battle had begun.

Wikimandia and many other Wikipedians have worked hard during the past two days to keep the article updated with the most recent news. She told us about that experience:

I’ve been continuously working on the article over the past day because I do feel some responsibility for it to be as up to date as possible—I would hate for it to be tagged with templates on issues that need to be improved, since this makes the article less credible for people looking for information. I also noticed that within hours, several other Wikipedia articles on the Battle of Mosul were popping up in other languages—French, Spanish, Arabic, Russian, etc. Often the editors creating the articles in other languages will just translate the original article to get them started as quickly as possible (particularly in current events/breaking news articles) and I wanted to have as much information as possible to help these other editors make their articles great resources for speakers of those languages.

In addition to the hard work to update the article, Wikimandia has applied her skills in graphic design to create a map showing the initial positions of the Iraqi army and Kurdish Peshmerga. “I’m going to further edit it to show the areas of ISIS/Iraqi/Kurdish control at the start of the battle,” Wikimandia explains. “This is really time consuming, but I think it is worth it. The downside of Wikipedia is that nearly all news photos and graphics are off limits to us since they are copyrighted.”

In two days, more than 50 Wikipedians, including Wikimandia, strove to provide the most up-to-date information on the Battle of Mosul, which is expected to last for 2 to 3 months. Wikipedia has also been the favored source for many news seekers.

“Wikipedia can be edited in real time and editors can work together to make sure it has the most reliable recent information. Even online newspapers cannot compete with a crowd-sourced Wikipedia article when it comes to providing the latest information,” Wikimandia notes.