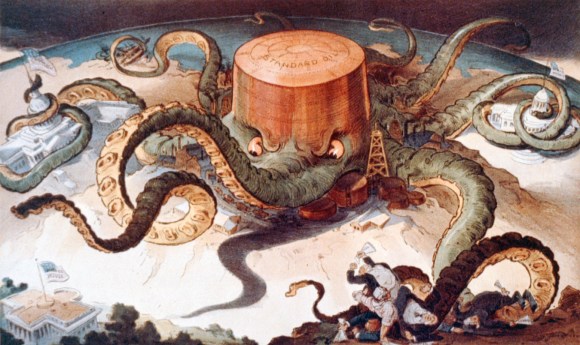 Painting by Udo Keppler via the Library of Congress, public domain/CC0.

The Google v. Equustek case originally concerned defendants who were found to be selling counterfeit products based on potentially stolen trade secrets owned by Equustek. Because Equustek was having trouble locating and stopping the defendants from making new infringing websites to sell the products, they petitioned a Canadian court for an order asking Google to delist any websites from that defendant. The court ruled that Google needed to do this, and not just in Canada but on every Google domain worldwide. Google then appealed the case, which has now reached the Supreme Court of Canada.

The Wikimedia Foundation requested permission from the Supreme Court of Canada to file an intervention (similar to an amicus brief in the United States) in order to inform the Court of the issues that an order with worldwide effect could create for the Wikimedia movement, explain why we think it’s a bad idea, and urge the court to create a test to consider the full range of freedom of expression issues when considering future takedown orders.

Our brief highlights two major points for the Court’s consideration. First, we highlight that under international norms and Canadian law, freedom of expression includes not only the right to publish information, but also the right to receive it. When content removal requests limit access to information, they impact the free expression of any individual looking for related information and provide them with a distorted view of reality. This is particularly important in a worldwide context, as different countries have very different standards about what information is and is not legal to publish and for citizens to search for online. An order requiring a company to remove content worldwide might mean that the free expression rights of people searching for information in a jurisdiction where that information is completely legal would be unfairly impacted.

Our second point focuses on the importance of international relations and a concept called comity. Comity is when courts, out of respect for the laws of other nations, decline to make certain rulings even if it is legally possible for them to do so. For example, courts in the United States sometimes won’t make their ruling based on U.S. law if the people in a lawsuit come from different countries and agreed in a contract that they would use the law of some other country.

In this case, comity comes up because there is a question of how other nations would view an international court order from Canada. If the Canadian courts insist on an order like this, there’s a good chance that courts from other nations might do the same thing, and a risk that countries with much stricter publication laws than Canada or the United States might try to force their laws on people around the world. This could have a negative impact on everyone’s free expression rights, and so we think the Court should decline to issue such an order even if it finds that legally it would be allowed to do so. We hope that the Canadian Supreme Court will articulate a clear and principled approach to this important issue which will stand as an example for other countries.

With our intervention submitted, we are now waiting to hear if the Court will also permit us to offer an oral argument briefly during the case, and we will then look forward to the Court’s ruling in spring 2017.

We would like to extend our gratitude to McInnes Cooper, specifically to David Fraser and Jane O’Neill, who assisted the Foundation by researching Canadian law and drafting the intervention brief.