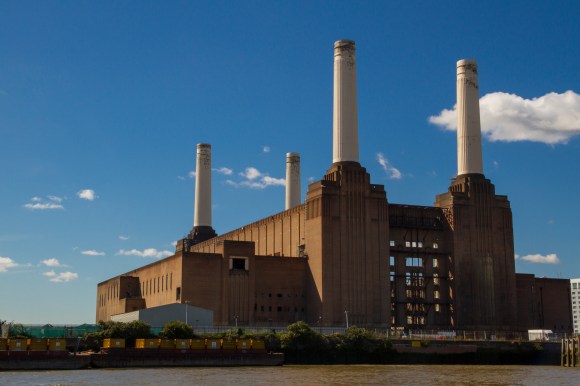 You gotta be crazy, you gotta have a real need
You gotta sleep on your toes, and when you’re on the street
You gotta be able to pick out the easy meat with your eyes closed

So begins the first verse of “Dogs,” a song by progressive rock icon Pink Floyd from their album Animals.

The cover of this album, the visuals that greeted every prospective buyer in record stores around Europe and the United States, featured the now-iconic Battersea Power Station with a forty-foot long inflatable pig floating above it.

The band ran into problems when a gust of wind carried the pig miles away, landing in a farmer’s field, but the resulting album cover was memorable enough to receive a cameo appearance during the opening ceremony of the 2012 Olympics.

This factoid is just one of many covered in Wikipedia’s “good” article on the power station, a quality marker given when an article meets six criteria. Most recently, editors have updated it to include information on Apple’s new London headquarters, which will be located on the site; approximately 1,400 Apple employees will eventually work from there.

The article was nominated for good article status by Wikipedia editor Fintan264, who called the power station “iconic and special”—although in large part only because it is the only station of its type still extant.

Fintan has worked on a plethora of power stations around the UK, including Lemington, Blyth, and Stella. The latter is perhaps the most important, as it is what kindled Fintan’s interest in power stations.

All in all, over 600 editors have made 1230 edits to the article in its fourteen years of existence. Created with 501 words by editor Maury Markowitz in October 2002, the article is now more than ten times larger, at 5,169 words.