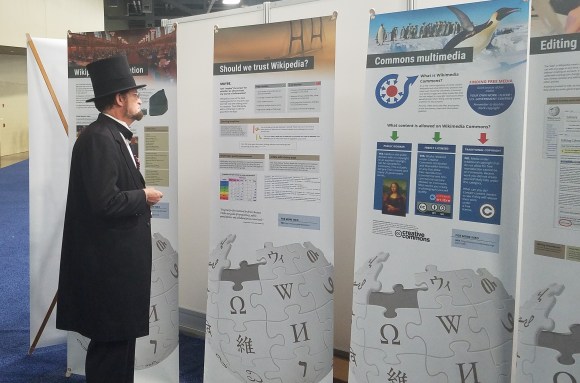 Imagine thousands of librarians from all parts of the world descending on a midwestern town in United States. What would they talk about?

To find out, the Wikimedia Foundation’s Wikipedia Library and GLAM-Wiki team traveled to Columbus during August to attend the World Library and Information Conference 2016 (#WLIC2016) hosted by the International Federation of Library Associations (IFLA) and its institutional supporters. We went to the conference hoping to help the library community get excited about the opportunities for collaborating with Wikipedia, by hosting an exhibit booth and giving a presentation.

And to our delight, we didn’t have to get people excited and start the conversation about Wikipedia in the library communities—librarians from all over the world were already doing it for us! We even found several presentations about Wikipedia editing campaigns hosted by libraries, such as participation in Art + Feminism.

Wikipedia became a hot topic throughout the conference, creating a backchannel of conversation on Twitter. But one conference only reaches a small community; that is why we have been working with the team at IFLA Headquarters to support the development of two public white papers which we first launched at the WLIC 2016.

How do we expose the world’s librarians to Wikipedia?

Enter libraries the world over, and wherever you find patrons using the internet, you will frequently also find patrons browsing Wikipedia. It’s hard to search the internet for information and not end up using Wikipedia information, whether you know it or not. But do the patrons get the best information for the topic they are looking for? Do they have the skills needed to use Wikipedia as part of a research process that helps with learning and advancement of human society?

We spoke to these points and more at our IFLA presentation. The talk introduced two draft papers produced by committees of volunteers and librarians who have explored the opportunities for Wikipedia and Libraries to collaborate. These committees, chaired by Wikimedians and library advocates Alex Hinojo of Amical Wikimedia and the Mylee Joseph of the State Library of New South Wales, created very strong first drafts of the papers that survey the opportunities for libraries to be more engaged in the Wikimedia community.

However, these committees were only able to scratch the surface of the experiences libraries and Wikipedia communities have with the Wikimedia community. For just one example, at the conference we discovered that Agricultural libraries at Cornell and Arizona State University had organized an editathon to cover key topic areas in agriculture! Wikipedia and the library communities have vast size, and it’s almost impossible for a small group of people to document: and that’s where we need your help!

We need you to help us refine the conversation!

As individual libraries it’s often hard to find the right skills, models and tools for collaborating so that the effort of libraries in improving access to information can work in collaboration with the effort of Wikipedians in sharing the sum of the world’s knowledge freely. However, there are hundreds of example partnerships throughout the world, that have demonstrated just how effective collaboration is.

That’s where the white papers can help: they seek to document the best of these opportunities. And we need your help expanding and refining them so that we can share the examples from around the world with anyone who wants to try them further. We invite you to join the conversation by reading and commenting at the following documents :

Thank you for your feedback, and for working to build the landscape of opportunities for Libraries and Wikipedia!