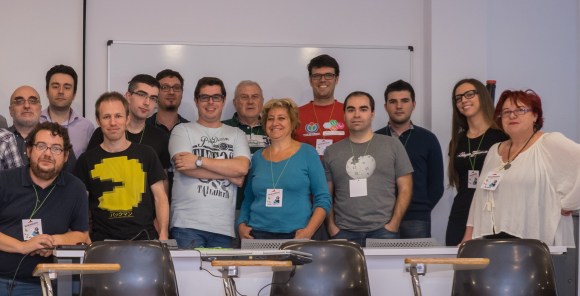 Members of Wikimedia Spain; Garcia is in the front row, left side, with a black and yellow Pacman shirt. Photo by Pedro J Pacheco, CC BY-SA 4.0.

Way back in August 2003, David García was browsing the Spanish Wikipedia while looking for information about mathematics and computer science, but he found it lacking and decided to fix it.

Hitting the “edit” button that day was a decision that changed García’s life—he has been editing, with a few breaks, ever since, celebrating thirteen years just a few months ago. Wikipedia has evolved over the years, and what García calls his first “little changes” have since turned into significant contributions that have not gone unnoticed.

A web developer, García was born and raised in Madrid, Spain; he now lives in Chicago, Illinois, in the United States. García has created 2,242 pages on the Spanish Wikipedia, and he has edited Wikipedia and the Wikimedia projects more than 100,000 times because he loves the idea of sharing.

“Being able to share what you’ve learned with other people is exciting,” he explains. “I love the idea of helping people and getting help from others. It is an amazing feeling when you are in Spain and can get guidance from someone in South Africa, China, Bolivia, Mexico or anywhere.” 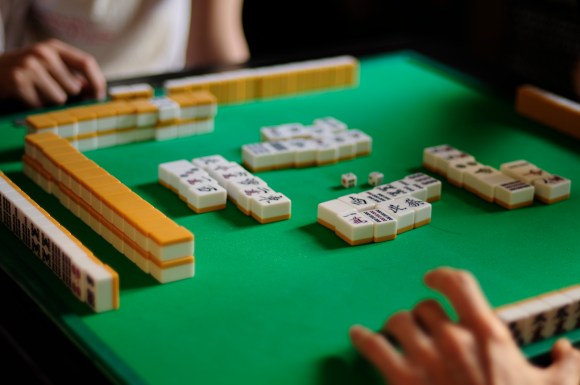 García’s first article on Wikipedia was about Mahjong. Photo by yui, CC BY 2.0.

Over the years, Wikipedia’s appearance, structure and content have changed extensively. In the first few years, not only was Wikipedia very different from what it is today, site visitors had different expectations and editors had different motivations for contributing.

“The Spanish Wikipedia had around 10,000 articles when I started editing,” García recalls. It now has 1.3 million. “The layout was totally different then—it looked like most websites in the 1990s. I remember that important articles were missing. There was no entry for triangular number until I created it in January 2004, and it did not include articles on many famous people like Martin Luther King until others finally created those.”

García has quit editing Wikipedia twice, once between 2006 and 2008 and then in 2014 for a year. During this time he had used Wikipedia to look for information, and every time he asked himself, “Why don’t you participate again?” The visceral nature of the site, however, means that he feels Wikipedia has changed when he returns; he’s found that he needs to “get used to it and learn about the policy and community nature all over again” each time.

García believes that being a Wikipedian does not necessarily require experience in the field you plan to write about. Since it is an encyclopedia that “anyone can edit,” anyone is eligible to do at any time once they have the references for a topic. If they don’t know where to start or what to write about, they can take on anything that interests them.

Sometimes, for example, García has decided to cover a topic of professional interest to him, like the article he wrote on prime numbers, a good article on the Spanish Wikipedia (meaning that it has met high-quality standards set by the community). He has also written about topics of personal interest, such as the most recent article he has created—Lapsed Catholic (in Spanish: Católico No Practicante).

“The decade” is a new blog series that will, as you might expect, profile Wikipedians who have spent ten years or more editing Wikipedia. If you know of a long-time editor who we should talk to, send us an email at blogteam[at]wikimedia.org.