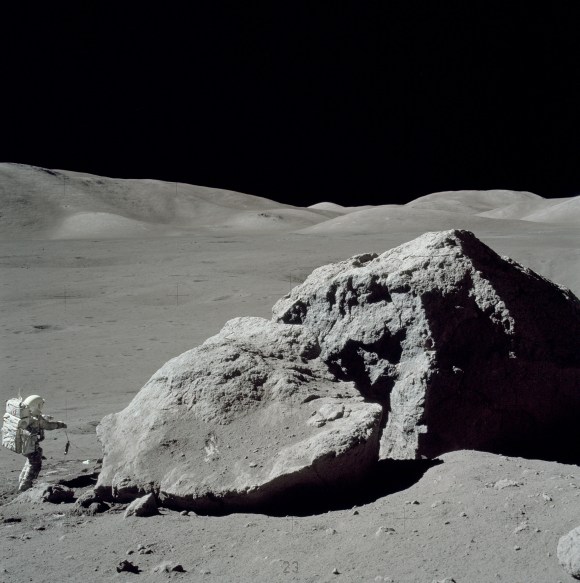 In 1977, NASA launched two identical Golden Records into space as part of the Voyager program. Voyager 1 and 2 have by now left the Solar System and are the farthest man-made objects from Earth. If one is ever discovered, its finders will experience sounds, images, and greetings in 55 languages that give an impression of life on Earth.

40 years later, enter Wikipedia to the Moon. Wikipedia, with more than forty million articles in hundreds of languages, is the largest collection of human knowledge ever compiled. As such, it provides a vast and ever-expanding picture of life on Earth and knowledge cultures from all around the world.

That was reason enough for the Berlin-based Part-Time Scientists, who are contesting the Google Lunar X Prize, to plan to include Wikipedia on their planned rovers. They hope to reach the Moon in late 2017, where they will leave a time capsule of free knowledge preserved in space.

Earlier this year, Wikipedians from all over the world voted to send featured articles and lists from all Wikipedia language versions to the Moon—the very best Wikipedia has to offer. We are now halfway into the working phase, and there are already more than 30,000 featured articles and lists in 155 languages in Wikipedia, a far larger and more diverse cross-section of human knowledge than the Golden Record contained.

And there is still space for more.

During our working phase, which runs until October 31st, editors will have the opportunity to improve existing featured content more or to work on their favourite articles that are not yet featured, using the Moon project as a motivation to edit these articles to featured standards. As a reward, your contributions to a newly featured article or list will be immortalized on the Moon. The contents of the disc will also be made available online as a time capsule. We will thus be able to trace how our collective free knowledge expands and transforms over the years.

You can still contribute even if your language community does not yet have a featured category. Our project aims to represent the diversity of knowledge in Wikipedia and take every language on Wikipedia to the Moon. Start a discussion in your community about how to select the very best articles your language version of Wikipedia has to offer and compile these articles on an overview page. Once you have compiled such a list, you can simply provide a link in the  work station table or get involved on the talk pages.

Help Wikipedia boldly go where no encyclopedia has gone before!