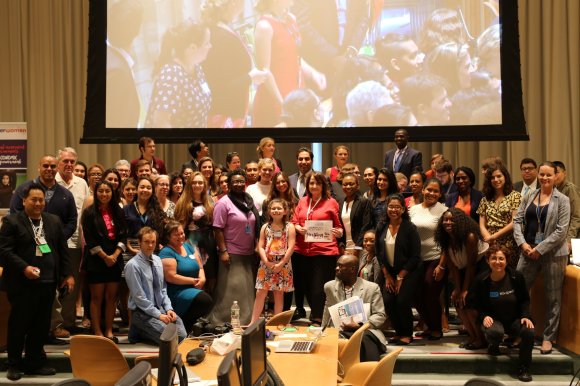 In the New York headquarters of the United Nations, a teak statue of a young woman hangs on the glowing wood wall of the sprawling Trusteeship Council chamber. The female figure in the Henrik Starcke sculpture reaches up, hopefully toward a flying bird.

Volunteer editors in this room reached out hopefully to the world on August 12, striving for a better place for women on Wikipedia, and in history. Dozens of editors gathered to create and improve Wikipedia articles about women at the United Nations—and at sites around the world.

Only 16.3 percent of the 1,383,736 biographies on the English Wikipedia were about women (as of 7 August 2015). The percentage of Wikipedia editors who are women is about the same. The August 12 event sought to bring both figures up.

“Today, in this room, change starts with you,” Katherine Maher, executive director of the Wikimedia Foundation, told new editors gathered in the capital of global cooperation.

The United Nations #HERstory project and editathon was organized by the Wikipedia community, supported by United Nations Women and joined by UN Secretary-General’s Envoy on Youth.

Fifty-six hundred miles away, Salma Nabil, 16, published her first Wikipedia article at a Cairo #HERstory editathon. “I attended without having a clue about what should I do or how to write on Wikipedia,” she said. “I can’t wait to write more.”

Other editors at the Cairo event posed for photos holding up laptop screens showing their new articles. A sight-impaired volunteer Wikipedian edited with the help of headphones and a microphone. Participants wrote the names of the women they wrote about on a large poster stretched across a wall: Emily Sartain, Nayera Mohamed, Lady MacBeth, Latifa al-Zayyat.

And another name, mentioned often as a great woman of the day who deserved credit: “A very special thanks to the hero of the day, May Hachem, who mentored us in writing our articles,” said Mahmoud Mansi, a Egyptian volunteer. Hachem, a WikiProject Women founder and Wikipedia Education Program leader in Egypt, ran the Cairo editathon and was the catalyst of #HERstory: she was invited by United Nations Women to run an editathon in Cairo, and later helped to expand that idea into editathons around the world.

Hachem said she was surprised by the number of women’s biographies that have never been written. With college professors and teenagers working together at her Cairo event, she said it was inspiring “to narrow the gender gap. I think this is just the beginning of many other campaigns.”

Nourhan Adel and other participants exulted in their experience, announcing it in a 21st century way. “I decided to change my job on Facebook to a researcher/editor at Wikipedia,” Nourhan said. “I am very proud of my experience with HerStory.”

The global campaign took place in different cities on the same day, and it inspired other communities to join online in the weeks prior to August 12. Mirroring the events in New York and Cairo, editathons also took place in Chennai and in Hyderabad, India.

Through a partnership with the Red Elephant Foundation, 250 people signed up to participate in Chennai, and were summoned on different days in batches of 17 due to lack of space. “I think it was absolutely vital for us to participate because it matters so much to us to put women back into the conversation and the rhetoric”, said Kirthi Jayakumar, a local organizer who noted that the campaign was very well received in India, and many of the women participants are still engaged in editing Wikipedia.

In Hyderabad, the editathon took place in partnership with Sayfty. “Who better to write about change in young women’s development but young women themselves?”, asked Sammy Sahni, another local organizer. In this smaller gathering, participants contributed information on sports women from Hyderabad like Sania Mirza, PV Sindhu, and also created a page on woman biker Sana Iqbal who rode her bike across India to create awareness about “Suicide and depression among our youth”.

On the same day, other editathons were hosted in Monterrey and Mexico City, Mexico. Similarly, workshops were held in the weeks prior to August 12 for about 20 people in Buenos Aires, with a specific focus on how to create content with a gender perspective. As a result, new articles were created on notable Argentine women like Yolanda Ortiz, Victoria Galardi and Romina Paula, as well as notable women from other countries, and women-related topics, coming out to 14 articles total.

The Spanish Wikipedia community also joined forces through an online editathon organized by the Wikimujeres User Group. In the span of 15 days, 36 participants from Spain, Argentina and Mexico got online to work on 84 different articles. While the focus was strongly set on women’s biographies, this editathon also worked on articles about women organizations, like Girls in Tech and Laboratoria, and women-related topics. You can see a full accounting of these events has been published.

The global effort shared this inspiration in many locations, where women were written into Wikipedia by volunteers with a sense of purpose, and joy.

This post has been updated to include information on a Spanish-language editathon.