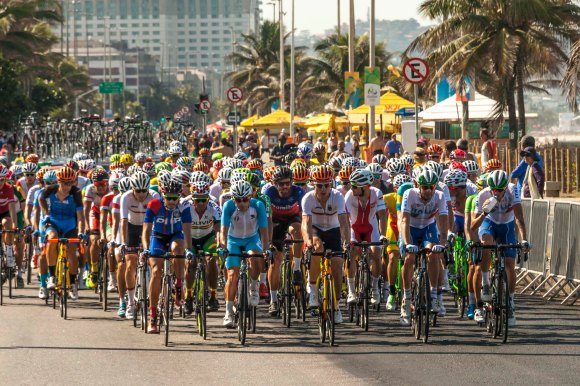 Weeks before Rio 2016 kicks off, people are getting ready for the event that values collaboration and healthy competition among the world’s best athletes. This includes the Wikipedia community, which is making strides to turn this enthusiasm for the Olympics and Paralympics into a collaboration to expand content about the games on Wikimedia projects.

Ángel Obregón, a Wikipedian from Cantabria, Spain, created the idea about incorporating the interest in the Olympics and Paralympics into Wikipedia content.

“Writing about the Olympics on Wikipedia is important,” Obregón states. “But that wasn’t the main goal here. I wanted to encourage people to edit Wikipedia by starting a new writing contest, and I thought we could make use of a current event like the Olympic Games with its worldwide audience to help us achieve that goal.”

Writing contests are widely used by the Wikipedia community as a tool to engage new users and/or motivate experienced ones to collaborate on developing content. The goals range from improving the content quality to filling the content gaps, or it can also just be a fun way to raise the competitive spirit between fellow Wikipedians.

Participants in Wiki Loves the Olympics get extra points for editing articles about the Paralympic Games or athletes who participate in the Paralympics. Rubén Ojeda, a program coordinator in Wikimedia España and one of the contest organizers, believes that contests are a good way to steer editing efforts to where they’re needed most.

“It not only covers the event held at the time of the contest,” says Ojeda, “it more importantly gives under-represented topics, like female athletes and paralympians, more visibility through Wikipedia.”

Raúl Muñoz Páez, one of the contest participants, was surprised to find there were no Wikipedia articles about prominent Paralympic athletes, like Irene Villa (Páez’s article in Catalan), on the Catalan Wikipedia. “She is very loved and well-known for being a victim of terrorism,” he says. Páez was therefore very thankful to discover Wiki Loves the Olympics as a new area of contribution. “Articles about Olympians and Paralympians are virtually non-existent compared to articles about political figures and reality show celebrities,” he adds.

While Wikimedia Iberocoop worked  hard on organizing the writing contest, the Wikimedia Community Brazilian Group of Education and Research did not miss the opportunity to join in the effort with a parallel photo contest on Wikimedia Commons.

“We will hold an edit-a-thon after the end of the games,” says Padula, co-organizer of the contest. “This edit-a-thon will aim at using the pictures on Wikipedia, filtering and categorizing the uploaded content on Wikimedia Commons.”

The Wiki Loves the Olympics photo contest is certainly intriguing. The general public takes photographs of the games and uploads them to Wikimedia Commons under a free licence. Wikipedians then feature the uploaded photos in their Rio 2016 Wikipedia articles shortly thereafter.

These photo and writing contests have encouraged the spirit of collaboration between Wikipedians, much like the Olympic Games inspire in its athletes. “Different chapters of Iberocoop have collaborated in its organization, which represents the key aspects of collaborative work in Wikipedia— multiculturalism and multilingualism,” says  Ojeda. “It is fun to see Arabic, Austrian, Bulgarian, Japanese and Portuguese participants in the same contest,” adds Páez.