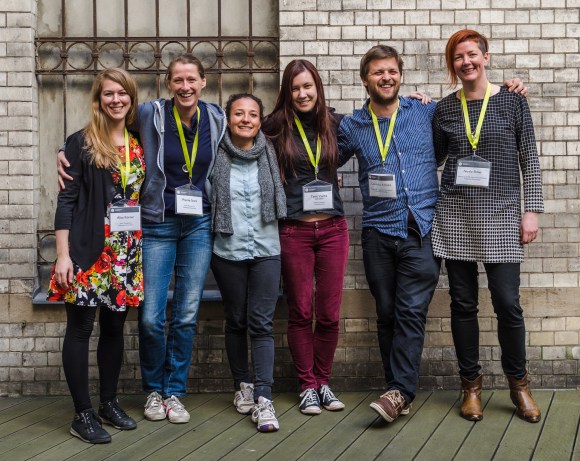 It started with an idea

I had been a participant of the Wikimedia Conference in Berlin, Germany three times before, representing our tiny Estonian chapter. It was always a bit challenging for me because I am introverted, but always very very exciting and inspiring. It brought me so much joy every time to be among „my tribe“, to hang around smart and friendly people who understood and cared about Wiki stuff.

In the beginning of this year I was thinking about the coming Wikimedia Conference and although I had enjoyed taking part of it in previous years, I felt that many of the sessions would be kind of re-runs, or I am not particularly interested in the topics of the sessions. I felt that as a participant I would not be very useful for other participants during the sessions, or for Estonian chapter and community after the conference. But still I longed for the atmosphere of the conference and meeting all my international Wiki-friends.

A few months earlier I had played a big part in organizing the Wikimedia CEE Meeting 2015 in Estonia with 70 people to care for. I had never before been responsible for an international event like that. I made mistakes, I had help and I learned a lot. It was an amazing experience.

To get, you have to give

I got an answer right away! Wenke Storn, the Event Manager at Wikimedia Germany wrote that they would be super excited to have me help them. Negotiations around legal stuff took some time, but all in all it was easier than I had hoped. They even found funds to cover my travel and living in Berlin. We agreed that it would be a three-month internship with two of the months in Berlin.

And there I was, on my way to Berlin. I entered the office of Wikimedia Germany on March 1st and found a place at the table in the Event Department room. My job title was Wikimedia Conference Support for Logistics & Program (impressive, huh?) and my job was to assist Daniela, the Logistics and Event Coordinator, and Cornelius, the Program and Engagement Coordinator with whatever they needed help with. And of course, to learn and learn and learn some more. Oh, did I tell you that I couldn’t speak German (although I could understand a bunch of words)? Well, as the Conference was international, communication with participants was in English. And the team members (and other chapter employees) were so kind to speak to me in English and even have the WMCON team meetings in English for my sake. They spoke German to each other outside of meetings naturally and I could listen in, concentrate and try to understand as much as possible. It made my head hurt but I was so happy and thankful for the learning opportunity. Additionally, if they discussed something important, they took time to explain it also to me in English.

Among many things, I learned about:

But also: doing something for a co-worker who is stressed out.

And not only the event team but all employees in the office were very friendly and interested in me. They asked how I came to be in Berlin and about life in Estonia, or simply smiled and said hello when passing me in the hallway. I was a stranger to them but they made me feel welcome.

One and a half months flew past and the Conference itself was knocking on our door. Suddenly everything was going much faster, as we were packing boxes for transportation to the venue and printing last documents—both the logistics and program coordinator were really busy and so was I. And then the participants arrived and the Conference began. Following five days were long and full of energy. I had to run and tape and explain and call and carry. And I think that a smile never left my face. I was trusted with things, like I were one of the team. And indeed I was, for that conference.

The feeling of being useful kept me moving and smiling. I believed in myself. I very much hope that the team and also the participants were satisfied with my assistance. One of my tasks had been coming up with Wikimedia-related questions and answers for a social game at the conference party so I was grinning with excitement to see if the attendees liked them. And they did! I was so proud.

But everything must come to an end. So did the Wikimedia Conference 2016 and I had to leave Germany. Obviously, I was sad to go and my mood sank after returning to Estonia because I was no longer in the exciting environment, but that is also a thing to learn from and to work on. All the knowledge and positive reinforcement that I got in Germany will hopefully stay with me. I am ready to put them into use.

And I am very happy that Wikimedia Germany is going to repeat it. They will have a new Visiting Wikimedian supporting Wikimedia Conference next year. How cool is that for someone else to also have the positive experience that I had?