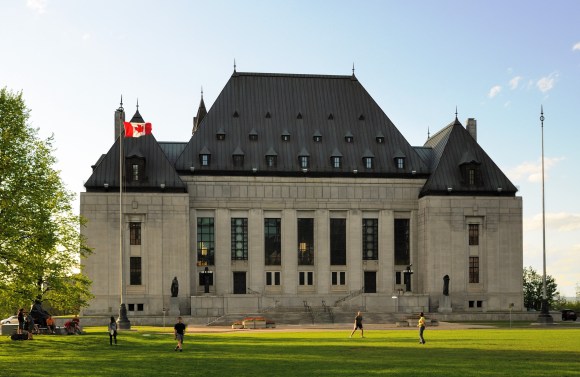 Today, the Wikimedia Foundation filed a motion to intervene in Equustek v. Google, a case currently before the Supreme Court of Canada. We took this step because we believe the Supreme Court’s forthcoming decision could have serious implications for freedom of expression and access to information online. Other organizations expected to intervene include the Canadian Civil Liberties Association and the Electronic Frontier Foundation.

When Datalink disobeyed the Court by continuing sales of its allegedly infringing products, the Court ordered Google, an uninvolved non-party to the dispute between the two companies, to indefinitely remove or cease indexing the entirety of Datalink’s websites—and several third-party web pages that referred to Datalink as well. In effect, the Court ordered Google to erase Datalink from Google’s search results. Further, the Court ordered that this removal be made effective globally across all of Google’s domains; not just on Google.ca in Canada, but on Google.com, Google.cn, and Google.fr and others as well. Google appealed the order, and the case is now before Canada’s highest Court.

An order of this kind threatens the free flow of information on the internet. Not only does it lack geographic or temporal limits—it is indefinite, and worldwide—but it was issued against an organization that was uninvolved in the underlying dispute and that was not accused of any wrongdoing. It is questionable whether such orders would be appropriate under any circumstances, but if considered, courts should take far greater care to safeguard free expression.

Removal orders such as those in Equustek could significantly impact the Wikimedia movement in several ways and ultimately pose a threat to online free expression and access to information, two of Wikimedia’s guiding values. To begin, the Wikimedia projects receive approximately 50% of their traffic from search engines such as Google. A global, indefinite order to de-index Wikimedia content would therefore impact a major source of Wikimedia’s readership.

In addition, the decision allows Canadian courts to order the worldwide removal or de-indexing of whole pages or even entire websites based on a small amount of allegedly infringing content. The Foundation believes that such broad removals would inevitably sweep up vastly more non-infringing expression than offending content. The overbreadth of such orders is a particular threat to Wikimedia projects such as Wikipedia, which contain countless external hyperlinks. These links often serve as necessary references for the Wikimedia movement’s free educational content. Under the lower Court’s reasoning, a single link to allegedly infringing content could result in the de-indexing of entire articles full of valuable, non-infringing educational information. We worry that such sweeping orders could create a chilling effect for editors, who might avoid inserting needed references for fear that those references could lead to an article’s complete erasure from search results.

We are similarly concerned about the extraterritorial application of the lower Court’s decision. It allows Canadian plaintiffs to use Canadian law to dictate the content that users in other countries may access, even if the offending content is perfectly legal in those countries. It could also set a troubling precedent for the reverse: foreign courts controlling the content that Canadians may view, even content that is legal in Canada.

Lastly, we are troubled that the lower Court’s decision has the potential to deputize search engines, like Google, or other organizations (who may not have the same resources as Google to sustain ongoing litigation) unrelated to underlying disputes to enforce private rights.

Therefore, we believe we must speak up in this case, with the hope that the Canadian Supreme Court will see the far-reaching impact such orders can have upon free speech, access to knowledge, and the internet at large. If the Supreme Court grants us leave to intervene, we will have eight weeks to submit a formal brief. We will keep the communities apprised of any developments in the case.

*Special thanks to Jim Buatti, WMF Legal Fellow, and Steven Pong, WMF Privacy Fellow, for their assistance on this case, and to Kris Borg-Olivier and Andrew Lokan of Paliare Roland for their representation of the Foundation.