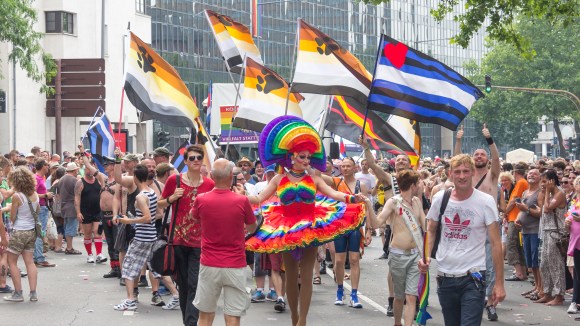 In recent years, editors have worked hard to address Wikipedia’s gender gap by organizing in-person and online activities to develop inclusive content, and identifying ways to make the movement more welcoming to women. Projects like Art+Feminism, WikiWomen’s History Month, and the Women in Red, among other groups, have made progress creating and improving content, and continue to bring new editors into the Wikimedia community.

But there are other content gaps we need to acknowledge. While women represent roughly half the population, those who identify as LGBT (lesbian, gay, bisexual, and transgender) or other sexual orientations and gender identities represent a much smaller percentage of the population. The LGBT community has a unique history and culture, which vary widely by geography.

If the cumulative sum of all human knowledge is our goal, then LGBT studies are an important piece of the puzzle.

June’s arrival brought with it Wikipedia’s third annual Wiki Loves Pride campaign, which focuses on improving LGBT-related content across all Wikimedia projects, in all languages. This year also marks my third time spearheading the campaign, along with a handful of other core volunteers.

Wiki Loves Pride is more of a concept than a defined project with specific parameters. Participants contribute in a variety of ways, from organizing edit-a-thons, to photographing pride events, to uploading images to the Wikimedia Commons LGBT Free Media Collective. We have collaborated with cultural and scientific institutions, including the Chemical Heritage Foundation, the Museum of Modern Art, the National Museum of American History, and the New York Public Library. We have hosted edit-a-thons at libraries and universities, including George Washington University’s Gelman Library and Portland State University.

Activities have not been limited to the United States, nor to English Wikipedia. Events have been organized in France, Sweden, and the United Kingdom, among other countries, and photo galleries have been created for LGBT events around the world, including Cape Town, Seoul, Tel Aviv, Vienna, and Warsaw. Translated campaign pages exist at French Wikipedia, German Wikipedia, and Italian Wikipedia.

In 2014, Wikimedia Commons hosted an LGBT-themed photo challenge, and WikiProject LGBT was created at Wikidata. We would love to see LGBT WikiProjects at Chinese Wikipedia, Persian Wikipedia, and Spanish Wikipedia, as well as LGBT initiatives at other Wikimedia projects, such as Wikibooks, Wikinews, Wikisource, and Wikivoyage’s LGBT Expedition.

Wiki Loves Pride is supported by the Wikimedia LGBT+ User Group, which has been recognized as an official Wikimedia Foundation affiliate. Among other benefits, this recognition provides representation at movement events like Wikimania, the Wikimedia Conference, and the Wikimedia Diversity Conference, which means more opportunities to share our mission and goals with movement leaders from around the world. I’ve had the pleasure of representing the user group at the Wikimedia Conference twice, and both times, I delivered brief presentations about the status of our group and extended invitations to expand the reach of Wiki Loves Pride, our flagship outreach and content development campaign. When I discuss the user group and its initiatives, I always begin my presentation with two disclaimers:

So, why do I contribute? I admit, sometimes organizing activities can be exhausting, and I can’t help feeling discouraged when I see some of the negative comments people leave on Facebook when our calls to action are shared by Wikipedia’s account. But the negative comments pale in comparison to the supportive responses. And, sure, every year I get a handful of harassing emails, accusing me of adding immoral content to the encyclopedia and criticizing the Wikimedia Foundation for “taking a stand” on a culturally sensitive issue, but I can brush these off with an eye roll (or two).

The supportive emails that appear in my inbox are what inspire me. Like the one from the man in Iran who wishes he could host a Wiki Loves Pride event, but can’t, because homosexuality is a crime punishable by imprisonment, corporal punishment, or even execution. Or the straight guy from South Africa who was once too embarrassed to document an LGBT event out of fear of being perceived as gay, but now feels empowered to document LGBT culture and history in his country. These are the messages I remember, and the reason I carry the torch.

If you are interested in participating, visit the 2016 project page to see what activities are being organized. Contributing can be as simple as creating or improving LGBT-related Wikipedia articles or taking photos at local pride parades and other LGBT establishments and events. Don’t see your city listed? Create a new entry, or simply add a page with a gallery of your photographs and other contributions once you are done. All contributions are welcome, big or small!