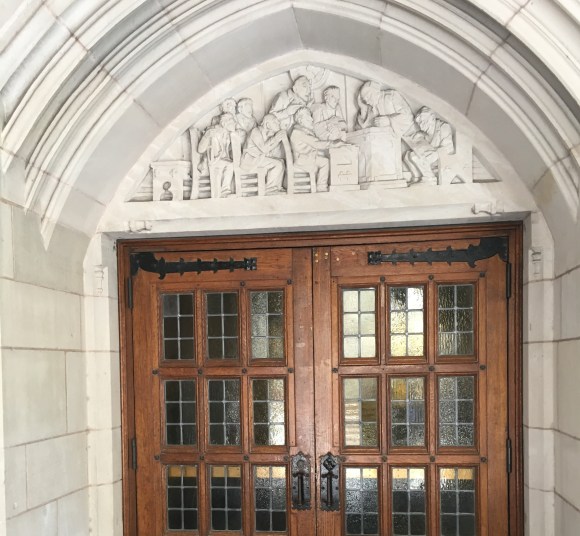 The topic of free expression is a critical one for the spread of knowledge around the world. If people are not able to talk about important issues and to share their knowledge with others, everyone is poorer for it. To help us learn about the important issues confronting free expression in the world today, we have cultivated a relationship with our friends at the Yale Information Society Project and I attended their annual conference on the topic, the Freedom of Expression Scholars conference.

The conference ran for 2 days, Saturday April 30th and Sunday May 1st. The format is split into multiple small group discussions in which a group of interested attendees workshop papers with their authors and a person designated to carefully read the paper and lead the discussion.

For the first panel, we workshopped a paper titled “Search Engines and Free Speech Coverage” by Heather Whitney and Mark Simpson. The paper critically examined the issue of whether search engines take on a role of editor for their search results similar to the way that a newspaper editor determines what content the paper’s readers see. The answer to this question has broad implications such as whether the government would be allowed to pass laws regulating what search results are shown to users. The paper did not reach a definite conclusion, however, but rather suggested that trying to simply compare a search engine algorithm to existing forms of publishing is too simple and instead judges should try to understand the purpose behind different types of regulation. As one example, we discussed during the talk that it might make sense at some point to pass regulation ensuring that search engines don’t allow for, say, a politician to spend a lot of money to bias the results.

For the second panel, we discussed a paper by Margot Kaminski entitled “Privacy and the Right to Record.” This paper tried to analyze the tension between a right of any individual to make recordings and the rights of other individuals to their personal privacy. The paper suggested that we can reasonably come up with spaces that are understood to be private (such as a bedroom or a bathroom) and therefore permission is needed to explicitly make recordings. On the other hand, other spaces such as the public and especially public places with public figures such as police officers and government officials, likely do not have an expectation of privacy and could be recorded even when they do not wish to be.

The third panel of the day was a large lunchtime group that presented 4 different papers all discussing with each other. The general topic was trying to come up with different theories behind free expression, especially to distinguish between the expression of individuals and the expression of corporations or other group entities. The panel discussed whether free expression is merely a protection from government overreach or based more on the need for individuals to express themselves in order to thrive.

The afternoon had two panels. For the first, we looked at a paper by James Weinstein that looked at principles of free expression and asked whether allowing hate speech so long as hateful conduct was regulated (and any speech that was clearly directed at harassing a specific person was still prohibited) might allow for people to feel more justified in obeying the law. For the second, we looked at a paper by Amy Gadja about what she called “The Right to be Forgotten in the United States,” which focused on existing U.S. privacy laws and suggested that the U.S. has a long history of protecting people’s private information but does not extend that privacy as far as the current EU version of the Right to be Forgotten.

Day 2 had fewer panels than the first day, as the conference ended in the mid-afternoon. For the first panel in the morning, we went over a paper by Alexander Tsesis called “Terrorist Speech and Social Media.” This paper took a strong view about the dangers of terrorism and suggested that free expression principles could be consistent with the regulation of terrorist speech on platforms such as Facebook and Twitter.

For the second panel, I acted as the lead discussant on a paper by Chris Fei Shen entitled “Asian Values and Internet Freedom” that used an empirical survey of many countries throughout Asia to try to understand how people’s culture impacted their views on free expression and censorship on the Internet. The survey found that people with some views such as a strong respect for authority and a belief that the group was more important than the individual were generally less supportive of free expression on the Internet than others, and noted in general that people in areas where many people had Internet access were more support of principles of free expression than people elsewhere.

The lunch talk on day 2 focused specifically on the role of Internet intermediaries (like WMF) and how they could or could not be legally involved in the regulation of speech. Similar to the first day, there were multiple papers presented and discussed, with some taking the stance that intermediaries could be responsible for monitoring their users (if not always, then when they got large enough to have the technical capability to do so), while others thought that the government even working with intermediaries would be impermissible under U.S. law and potentially the law of other nations that guarantee free speech and free expression to their citizens. Of particular note, Emma Llanso and Rita Cant from the Center for Democracy and Technology presented a paper called “Internet Referral Units : Co-option of Private Content Moderation Systems for Extralegal Government Censorship” that looked at how governments are using the terms of use of many websites to report content that the government finds distasteful and get it removed, even though the government has no legal right to remove the content directly. Llanso and Cant argued that even though websites are free to set their own terms of use, pressure to censor content by governments could constitute illegal state censorship.

The last talk of the conference was a paper by Victoria Baranetsky, one of Wikimedia’s former legal counsel, who argued in her paper that encryption should be protected in the U.S. under the press clause of the First Amendment because it is a tool that enables people to safely gather information and report on it without being spied on by the government.

We believe that free expression is one of the foundational principles that allows people all around the world to develop and share knowledge with each other. Conferences like this one help us to stay current with the issues and theories around free expression doctrine and connected with the people who are developing the leading theories in this important area of law. This, in turn, helps us to best protect Wikimedians all around the world.