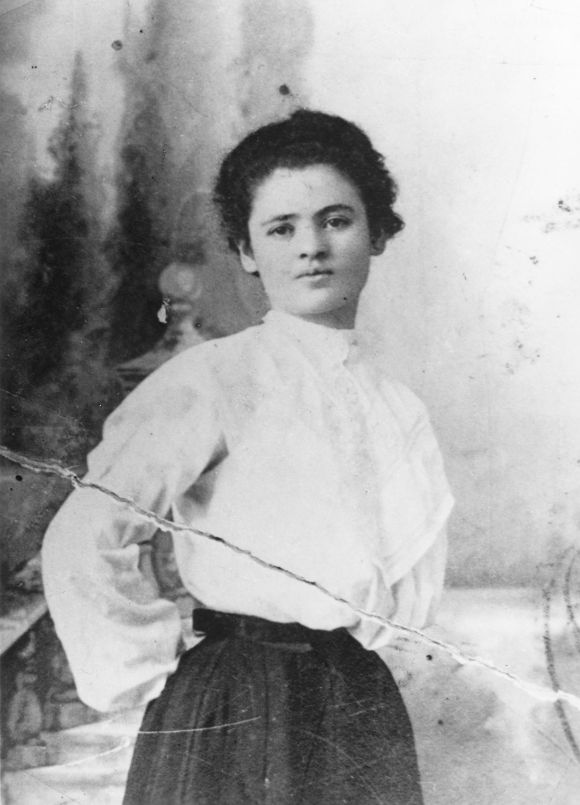 Clara Lemlich Shavelson was a leader of the Uprising of 20,000, the massive strike of shirtwaist workers in New York’s garment industry in 1909. Later blacklisted from the industry for her labor union work, she became a member of the Communist Party USA and a consumer activist. In her last years as a nursing home resident she helped to organize the staff.

Lemlich came to the attention of the outside world at the mass meeting held at Cooper Union on November 22, 1909 to rally support for the striking shirtwaist workers at the Triangle Shirtwaist Company and Leiserson Company. After the leading figures of the American labor movement and socialist leaders of the Lower East Side spoke in general terms about the need for solidarity and preparedness, Lemlich demanded the opportunity to speak.

Lifted onto the platform she demanded action:

“I have listened to all the speakers, and I have no further patience for talk. I am a working girl, one of those striking against intolerable conditions. I am tired of listening to speakers who talk in generalities. What we are here for is to decide whether or not to strike. I make a motion that we go out in a general strike.”

The crowd responded enthusiastically and, after taking a modified version of the ancient Jewish oath of fidelity to Israel — “If I turn traitor to the cause I now pledge, may this hand wither from the arm I now raise” — voted for a general strike. Approximately 20,000 out of the 32,000 workers in the shirtwaist trade walked out in the next two days.

Lemlich took a leading role in bringing workers out, speaking at rallies until she lost her voice.

Today is International Workers’ Day (also known as May Day or Labour Day, in some places). The day has origins with the Haymarket affair, a bombing undertaken on a labour demonstration in Chicago, Illinois, on Tuesday May 4, 1886. May 1 is a public holiday in many countries worldwide, and is a celebration of labourers and the working classes promoted by labour groups and social activists each year.

The text in this blogpost is adapted from the respective Wikipedia articles, each written by hundreds of different editors who have released their contributions under a Creative Commons CC BY-SA 3.0 license. For full author information, see each article’s respective history page.

Lech Wałęsa is a retired Polish politician and labor activist. He co-founded and headed Solidarity (Solidarność), the Soviet bloc‘s first independent trade union, won the Nobel Peace Prize in 1983, and served as President of Poland from 1990 to 1995. Wałęsa was an electrician by trade. Soon after beginning work at Lenin Shipyard (now Gdańsk Shipyard), he became a trade union activist, for which he was persecuted by the Communist authorities, placed under surveillance, fired in 1976, and arrested several times. In August 1980 he was instrumental in political negotiations that led to the ground-breaking Gdańsk Agreement between striking workers and the government. He became a co-founder of the Solidarity trade union movement. After martial law was imposed in Poland and Solidarity was outlawed, Wałęsa was arrested again. Upon his release from custody he continued his activism and was prominent in the establishment of the 1989 Round Table Agreement that led to semi-free parliamentary elections in June 1989, and to a Solidarity-led government.

Mary Harris “Mother” Jones was an Irish-American schoolteacher and dressmaker who became a prominent labor and community organizer. She helped coordinate major strikes and cofounded the Industrial Workers of the World. Jones worked as a teacher and dressmaker, but after her husband and four children all died of yellow fever in 1867 and her dress shop was destroyed in the Great Chicago Fire of 1871, she began working as an organizer for the Knights of Labor and the United Mine Workers union. From 1897, at about 60 years of age, she was known as Mother Jones. In 1902 she was called “the most dangerous woman in America” for her success in organizing mine workers and their families against the mine owners. In 1903, to protest the lax enforcement of the child labor laws in the Pennsylvania mines and silk mills, she organized a children’s march from Philadelphia to the home of President Theodore Roosevelt in New York.

Kailash Satyarthi is an Indian children’s rights and education advocate and an activist against child labour. He founded the Bachpan Bachao Andolan (lit. Save the Childhood Movement) in 1980 and has acted to protect the rights of more than 83,000 children from 144 countries. It is largely because of Satyarthi’s work and activism that the International Labour Organization adopted Convention No. 182 on the worst forms of child labour, which is now a principal guideline for governments around the world. His work is recognized through various national and international honours and awards including the Nobel Peace Prize of 2014, which he shared with Malala Yousafzai of Pakistan.

Lucy Eldine Gonzalez Parsons was an American labor organizer, radical socialist and anarchist communist. She is remembered as a powerful orator. Parsons entered the radical movement following her marriage to newspaper editor Albert Parsons and moved with him from Texas to Chicago, where she contributed to the newspaper he famously edited, The Alarm. Following her husband’s 1887 execution in conjunction with the Haymarket Affair, Parsons remained a leading American radical activist as a member of the Industrial Workers of the World and other political organizations. Described by the Chicago Police Department as “more dangerous than a thousand rioters” in the 1920s, Parsons and her husband had become highly effective anarchist organizers primarily involved in the labor movement in the late 19th century, but also participating in revolutionary activism on behalf of political prisoners, people of color, the homeless and women. 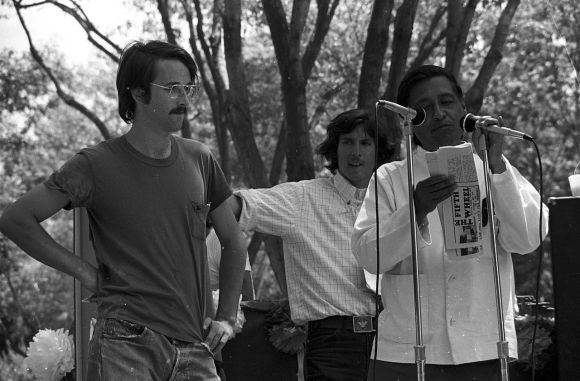 Chavez (right) speaking at a rally in Delano, Califronia. Photo by Joel Levine, CC BY 3.0.

Cesar Chavez (born César Estrada Chávez) was an American farm worker, labor leader and civil rights activist, who, with Dolores Huerta, co-founded the National Farm Workers Association (later the United Farm Workers union, UFW). A Mexican American, Chavez became the best known Latino American civil rights activist, and was strongly promoted by the American labor movement, which was eager to enroll Hispanic members. His public-relations approach to unionism and aggressive but nonviolent tactics made the farm workers’ struggle a moral cause with nationwide support. By the late 1970s, his tactics had forced growers to recognize the UFW as the bargaining agent for 50,000 field workers in California and Florida. He has since become an icon for organized labor and leftist politics, symbolizing support for workers and for Hispanic empowerment based on grass roots organizing. He is also famous for popularizing the slogan “Sí, se puede” (Spanish for “Yes, one can” or, roughly, “Yes, it can be done”), which was adopted as the 2008 campaign slogan of Barack Obama.

Louis Jean Joseph Charles Blanc was a French politician and historian. A socialist who favored reforms, he called for the creation of cooperatives in order to guarantee employment for the urban poor. Following the Revolution of 1848 Blanc became a member of the provisional government and began advocating for cooperatives which would be initially aided by the government but ultimately controlled by the workers themselves. Blanc’s advocacy failed and, caught between radical worker tendencies and the National Guard, he was forced into exile. Even though Blanc’s ideas of the workers’ cooperatives were never realized, his political and social ideas greatly contributed to the development of socialism in France.

Anna Walentynowicz was a Polish free trade union activist. Her firing in August 1980 was the event which ignited the strike at the Lenin Shipyard in Gdańsk, set off a wave of strikes in Poland, and quickly paralyzed the Baltic coast. The Interfactory Strike Committee (MKS) based in the Gdańsk shipyard eventually transformed itself into the Solidarity trade union, of which she became a prominent member. By September, more than one million workers were on strike in support of the 21 demands of MKS, making it the largest strike ever. Walentynowicz’s arrest became an organizing slogan (Bring Anna Walentynowicz Back to Work!) in the early days of the Gdansk strike. She is referred to by some as the “mother of independent Poland.”

Leon E. Bates, Sr., was an American labor union leader with the United Auto Workers union (UAW) from 1937 to 1964 when he retired as an “International Representative” of the UAW. He was one of the first African-American union organizers to work for the “UAW-CIO” (Congress of Industrial Organizations). While at Briggs Manufacturing Company in Detroit, Michigan, Bates became involved in the organized labor movement, he worked passionately for the organized labor cause at Briggs. By 1937, the UAW-CIO had organized and signed a collective bargaining agreement with the Briggs Manufacturing Company. Through that effort Leon Bates became one of the most outspoken union stewards of UAW Local #212. In 1937 Briggs was the fourth largest employer of African Americans in the Detroit area with more than 1,300 or approximately 10% of its total payroll.