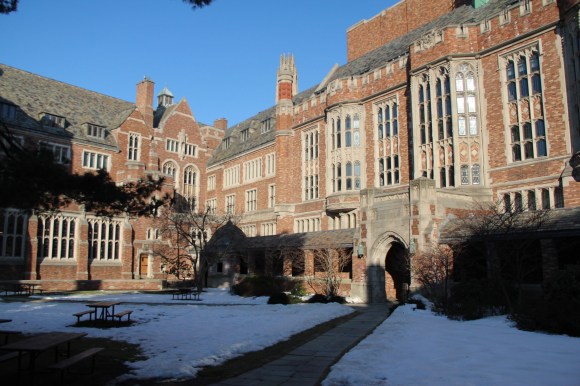 Many fields of law have been developing for hundreds of years, and generally change at a rather slow pace. Not so for the law of and affecting the Internet, however. With the pace of change of technology and how people communicate online, we Internet lawyers at the Wikimedia Foundation need to keep up with the scholars and legal experts on the digital frontier. To that end, we have developed and cultivated a relationship with our colleagues at Yale Law School’s Information Society Project. I visited our friends there last month.

On February 29, I attended a talk by Nuala O’Connor, President & CEO of the Center for Democracy and Technology. She discussed a range of topics, including privacy, surveillance, free expression, and the recent legal battles over encryption in the U.S. O’Connor said that the “equilibrium” between the rights of the state and the rights of the self is out-of-balance, with the rights of the state currently overwhelming the rights of the self. This is evident particularly with regard to the U.S. government’s mass data collection programs (over which WMF is currently suing the NSA). O’Connor finds particularly upsetting the government’s technique of getting data about individuals by accessing information stored in the private sector, which they can often do without due process.

O’Connor spoke to the ongoing conversation about encryption and security, sparked in part by the FBI’s recent attempt to get Apple to help them access encrypted data on an iPhone. O’Connor addressed that case, supporting Apple’s decision to resist the government’s demands and defending individuals’ access to strong encryption that law enforcement cannot circumvent. She said that breaking encryption is a larger threat to national security than is bad actors using encryption to prevent law enforcement from seeing their communications.

In the private sector, however, O’Connor’s biggest concern is not privacy but harm to free expression. In her assessment, corporate codes of conduct are working fairly well with regard to user privacy and data. She worries, though, that we are harming our ability to communicate with each other by taking down content under the guise of protecting ourselves. She explained that progress and understanding can only happen if we are able to disagree, listen to each other, and work together, but that that cannot happen if online discussion spaces are moderated to eliminate conflict.

Wikimedia’s values resonate strongly with the ones O’Connor expressed in her talk. We care deeply about the freedom to express, share, and gain knowledge. Essential to that freedom is privacy—the ability to be anonymous if desired, and to access knowledge without being watched and tracked by governments.

In my next day at Yale, I attended a talk by Alain Pottage, Professor of Law at the London School of Economics. In his talk, which was more theoretical than O’Connor’s, he explored the idea of brands (and therefore trademarks) as meaningful and valuable not because of their indication of the quality of a product (as in the traditional model of trademarks) but because of their use in collaborative communication among consumers. That idea is evident in the Wikimedia movement. Wikipedia is a valuable brand, but that value does not come from simply the content of the articles—that content is published under a Creative Commons license, allowing anyone to make a complete mirror of the content of Wikipedia if they like. However, the communities of writers, editors, photographers, and volunteer administrators that contribute to Wikipedia are not so easily replicable. They are what make the Wikipedia brand valuable, because they keep Wikipedia alive—always growing and improving.

I also sat in on a session of a course, “Law and Disruptive Technology”, taught by ISP fellows BJ Ard and Rebecca Crootof and Professor Jack Balkin. They were discussing the significance and limits of using analogies to create policy around and to apply law to new technologies. They looked especially to the concept of “cyberspace”, and how metaphors of “cyberspace” as a physical place led lawmakers and judges to apply existing law to cyberspace as if it were a physical place. This physical space conceptualization helped allow the Internet to be as borderless a communication medium as has ever existed. Editors around the world can all contribute to the same Wikipedia article without paying postage, obtaining a visa, or going through customs.

The laws that affect the overlap of the Internet, intellectual property, and our ever-connected electronic devices is still fairly new and rapidly changing. Visits like this help us stay connected with the people who are keeping up with those changes, analyzing, and predicting how they will shape the future. They keep us involved with ongoing debates in Internet-related law so we can best protect Wikimedians from threats to their privacy, freedom of expression, reputation, or ability to participate in the projects.