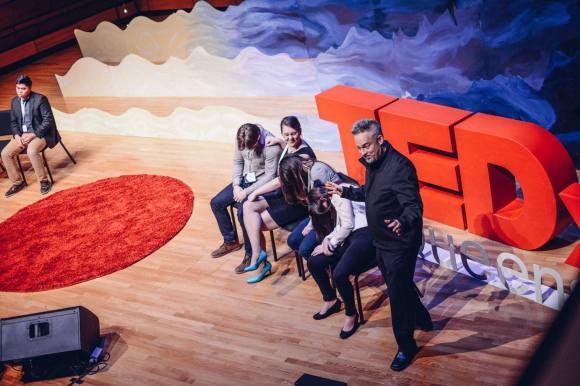 TED, the U.S. based nonprofit dedicated to “ideas worth spreading,” offers more than 2,000 free talks from expert speakers on education, business, science, technology and creativity. In a new partnership with Wikimedia community members, TED has donated the massive amount of metadata behind these more than 2,000 talks, many of which have been transcribed and translated by a worldwide network of TED volunteers.

This is helping Wikimedians make it easier and more efficient to find multilingual knowledge on a given TED-related topic, from the science of love to the surprising benefits of mushrooms, across all Wikimedia projects. Wikimedians in Residence are integrating this data into the Wikimedia projects, and helping TED employees and its community engage on those projects.

Beginning in February, Wikimedians Jane Darnell and Andy Mabbett have been working with TED in a six-month residency program as the organization’s Wikimedians in Residence, a program that places editors within cultural and educational institutions to help unlock and share an institution’s collections on the Wikimedia sites. Together, they are cataloguing this large set of TED metadata on Wikidata, the freely licensed Wikimedia knowledge base. So far, they’ve catalogued more than 1,000 talks.

“I have been inspired by TED Talks for many years,” Evenstein Sigalov told the blog. “Being an advocate for free knowledge and a Wikimedian, I believe our movements share common goals and am excited to make information from TED Talks more accessible to the world. I hope that the relationship between TED and Wikipedia will foster closer ties between our communities.”

By adding TED metadata to Wikidata, Darnell and Mabbett are documenting what knowledge is available from TED talks and making it easier for that information to be found and used across Wikimedia projects. They are also using the data from TED talks to identify gaps in knowledge on the Wikimedia projects. For example, Darnell and Andy plan to identify notable TED speakers with no accompanying Wikipedia article in English and other major languages. Mabbett says that these individuals have “very interesting life histories for us to document.”

Darnell and Mabbett are also planning to collaborate with TED employees and TED’s volunteer communities as well to engage them in the Wikimedia projects and expand TED-related content on the sites. As part of this, they’d like to run edit-a-thons with TED staff and the public to raise awareness of the project.

“Ideas are powerful,” said Deron Triff, Head of Media Partnerships and Format Innovation at TED.  “They can expand perspective, change attitudes, and ultimately contribute to a better world. At TED, we aim to make great ideas accessible to everyone seeking a deeper understanding of our world. Today, we’re excited to work closely with the Wikipedia community to further our unified mission of sharing knowledge.”

If you would like to get involved and stay up to date on the project, please feel free to visit the project page.