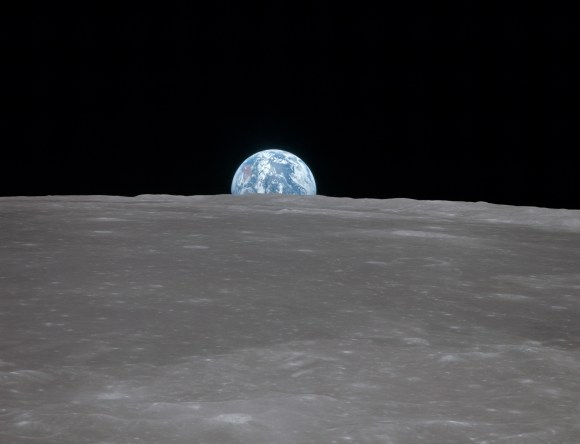 Now, Wikipedia’s goal is to be the sum of all knowledge, but what is that even supposed to mean?

Maybe it means that you can only know for certain if you get involved. 15 years ago, when Wikipedia was launched, many people doubted that anything good could come of an encyclopedia that anyone can edit freely, anytime and anywhere. Others didn’t argue, they just began editing. Well, you know how it all turned out: Wikipedia today is the greatest source of knowledge that has ever been freely available. Children have grown up using it and have never seen a world in which people didn’t check Wikipedia on a daily basis.

Okay, but what about those Moon landings? While not everyone would agree that pushing that edit button and getting involved with Wikipedia is easy (It is, try it! Tens of thousands of people do it regularly.), it’s definitely harder to get involved with landing on the Moon. Right?

Wrong! It’s just as easy as pushing the edit button, literally. Here’s proof: go to Meta-Wiki and join the community discussion about taking Wikipedia to the Moon. This isn’t a belated April fools’ joke. This is for real. It’s a birthday gift to the global community of Wikipedia editors in the year of our 15th anniversary, and here’s how it has come about:

One of the last remaining teams in the Google Lunar XPRIZE challenge is from Berlin, Germany. They are planning to land a rover on the Moon surface, make it drive 500 meters and send images back to earth. That’s the challenge for all competitors. The Part-Time Scientists (that’s what they have named their team) have been working on this since 2007. Now they are in the final stages of preparation, and when they had time to think about what their rover could take to the Moon besides scientific experiments, they didn’t have to think twice: Wikipedia!

That’s basically all the initial email said when we at Wikimedia Germany (Deutschland) got it. I remember what I was thinking: “The Moon? The Moon is cool! Space travel is cool! Wait, is this spam? Are they serious, and if they are, why would they even need our help?” Because that’s what the Part-Time Scientists were asking for in that email: support with putting Wikipedia on a data disc. Also, they concluded with an invitation to visit their office in Berlin. Which we did, right away. Compared to the distances of space travel, a 45 minute ride by S-Bahn means we’re practically neighbors.

They showed us all the prototypes, and the special ceramic-made data disc that wouldn’t lose storage capacity in space like conventional mediums would. But the disc holds only about 20 GB of data. Wikipedia, with all its language versions, revision histories and its media files is terabytes of data. So, you need to put some thinking into it: What and how to select? There are almost 40 Million articles in close to 300 languages! Who is even in the position to make such a selection – for everybody. And quite irreversibly, too, because this truly is long-time conservation.

These are not the kind of questions you can pay attention to when you’re busy trying to engineer your own Moon rover and organize a 384,000 km journey through space. That’s why the Part-Time Scientists asked Wikimedia Germany for support. And even though that didn’t make the above questions any simpler to answer, the one that may seem the most difficult proved to be the easiest:

A challenge to all Wikipedians

No one is in the position to make the call on behalf of a global community of volunteer editors but the global community itself. Think about these fascinatingly “unwikipedian” circumstances: We don’t usually have encyclopedical deadlines, but there is one for this. We don’t have limitations on how much we can write, but we have them for this challenge. This is all very different from business as usual, and it needs to be open to everyone.

Let’s do this the Wikipedia way! Get involved, click the link above and push that edit button. Meta-Wiki has always been the place to discuss upcoming projects and ideas. So, we’ve put all the information we have on Meta, and hereby invite the global Wikipedia community to discuss and ultimately decide on how to bring Wikipedia to the Moon – on-wiki, from start to finish. We have time until the end of the year to discuss, decide, work on content, and, in short, prepare a snapshot of the sum of all knowledge. Hey, 1972 Voyager mission’s Golden Record, you’re about to get company out there …

We’ve been asked if we honestly believe that thousands of Wikipedians from all over the world, from different communities and with different cultural backgrounds can discuss and create one common time-capsule just like that. With a million issues about quality, bias, representation, or facilitation.

Why not? Let’s start editing and see. It doesn’t say “be bold” for nothing. The first step is easy: Check out Wikipedia to the Moon on Meta-Wiki. If you have more questions than you find answered there, just add them. It’s a wiki.