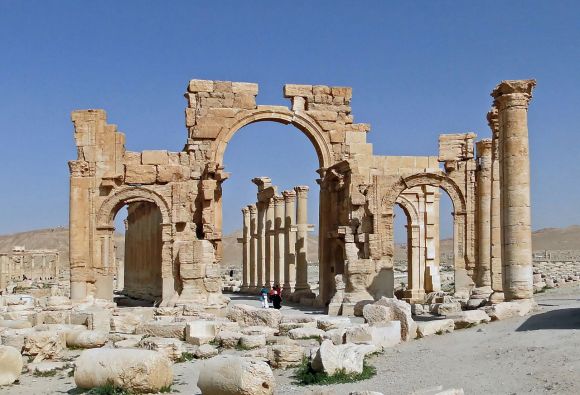 The Arch of Triumph, destroyed by ISIL last year, was recreated and installed in central London this week. Image by Bernard Gagnon, freely licensed under CC BY-SA 3.0.

In 2015, jihadist group the Islamic State of Iraq and the Levant (ISIL) invaded and captured the ancient Syrian city of Palmyra. Months later, they reportedly destroyed large swathes of its cultural and historical monuments, including the Temple of Bel—thought to have been in place at the site since the year 32.

This week, the Institute of Digital Archaeology created a scale model of the Arch of Triumph in the middle of London’s Trafalgar Square, a monument previously destroyed by ISIL upon their capture of Palmyra. “It is a message of raising awareness in the world… We have common heritage,” Maamoun Abdulkarim, Syria’s director of antiquities, told BBC News Online. ” Our heritage is universal—it is not just for Syrian people.”

In the Syrian civil war, Palmyra is more than a sacred site. Its central location within Syria makes it strategically important to both sides, which is unfortunate considering the depth of culture preserved so well in Palmyra before the onset of this war.

The New Palmyra project’s work has been more important than ever before during this conflict. The project works on freely-licensed, digital reconstructions of ancient monuments in the city, including the aforementioned Temple of Bel. Launched in October 2015, it helps to combat the destruction of cultural artifacts by retaining them digitally.

Jon Phillips is the founder of Fabricatorz, a global design and technology company which acts as technical advisor to the project’s work. “New Palmyra is very focused on bringing all groups and people to the table to share data about Palmyra,” he explains, “and to releasing that information using the Creative Commons Zero license, so that all may share in the historic reconstruction of Palmyra.”

The image above is the work of Bassel Khartabil, a figure in the Syrian free culture movement currently imprisoned in an unknown location by the Syrian government. His work in photographing the site, which he had been doing from 2005 through to his arrest in 2012, led directly to the creation of the project.

“He gave us the spark to reconstruct Palmyra the open source way,” says Phillips. “Bassel’s culture is free culture.”

His work on the project provided an avenue of preserving the cultural significance of the city amidst massive uncertainty around their future. UNESCO called ISIL’s campaign in Palmyra a form of “cultural cleansing”, stating that they would launch a campaign to evaluate damage, and to protect the remaining ruins in the area.

“While ISIL destroyed parts of Palmyra actively in the last year, the site has been destroyed, rebuilt and reshaped since its creation,” Phillips says. “Regardless of politics, it reawakened the world to the cultural significance of the city.

“We are still in the short term news cycle about Syrian forces retaking the city, so there are loads of articles about the city, and assessment of the damage is taking place. People are now asking, ‘what may be recovered?’ Others are discussing how they may rebuild the city or make a part with new technology.” 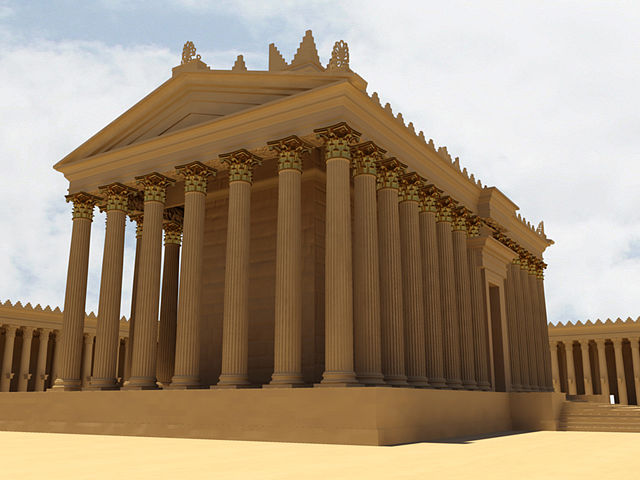 A digital reconstruction of the Temple of Bel from the New Palmyra project. Image by Bassel Khartabil, public domain/CC0.

The English Wikipedia’s rundown of the events of the past month in the city are documented in the article “Palmyra offensive (March 2016)“, a page created by German Wikipedian Flying Desert Snow Leopard and which has been mostly written by EkoGraf, a user who specialises in articles relating to modern conflicts. Despite only 242 edits having been made to the page—quite a low figure relative to other breaking news topics on Wikipedia—the article is cited with 84 different sources and goes into detail on the specifics of the conflict.

Last month, the Syrian government announced it had retaken nearby city Tadmur from ISIL in what is the third of three named offensives undertaken in the city during the country’s civil war. This was partially thanks to Russian airstrikes in the region, which began on March 9; by March 14, Russia had launched around 80 strikes on the region. Later, mass graves reportedly containing soldiers and civilians killed in initial assaults on the city were discovered by state forces.