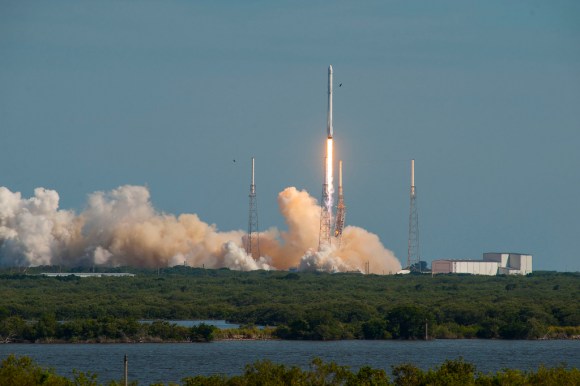 Never ones to shy from an occasion, SpaceX made history again on April 8, landing a rocket’s first stage upright on a drone ship in the middle of the Atlantic Ocean. It’s the first time any spaceflight agency has achieved this, and marks an important step towards SpaceX’s own goals of reusable rockets in the future—which may, ultimately, lead to commercial space travel becoming a viable initiative.

Wikipedia’s coverage of the final frontier, and efforts to reach it, is quite extensive. WikiProject Spaceflight, an active task force aimed at improving articles in the domain, has almost 200 users signed up as members. More than 6,600 articles have been categorised as within the project’s scope, and of these, nine are “featured” quality—meaning they have been peer-reviewed and are now considered among the best articles on the site.

“SpaceX reusable launch system development program” is classed as a “good article“, which means it meets the criteria to be listed among some 24,000 fellow “good articles” on the English Wikipedia. It currently exists in five other languages, too—the eclectic mix of Arabic, Farsi, Finnish, Hindi, Urdu—as communities work on improving the coverage of the recent milestones in their own native tongues.

The page on SpaceX itself is quite popular on Wikipedia, and was the 80th-most viewed page on the English-language Wikipedia on April 9, the day after the landing. Even the article on SpaceX CEO Elon Musk, one which attracts tens of thousands of views every day, peaked following the landing, attracting almost 70,000 pageviews.