During March, across all French-speaking territories, Wikimedians are organizing dozens of events, training workshops, conferences, and photo walks to gather local contributors and promote the Wikimedia projects. 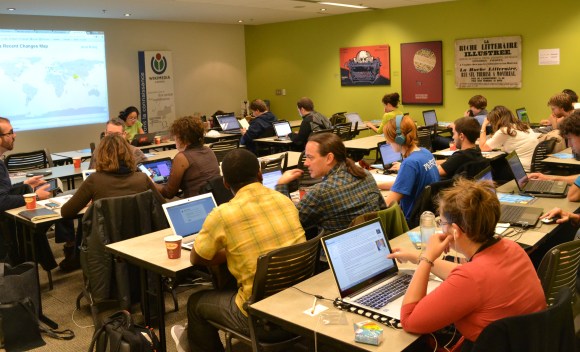 A science workshop in Montreal held during the Francophone Contribution Month, a collaboration between Wikimedia Canada, Acfas, and BAnQ. Photo by Benoit Rochon, freely licensed under CC BY-SA 4.0.

During March, across all French-speaking territories, Wikimedians are organizing dozens of events, training workshops, conferences, and photo walks to gather local contributors and promote the Wikimedia projects.

By definition, editing Wikipedia and its sister projects is a solitary sport; we contribute on our computers, our tablets, and our phones. We are aiming to change this, to help local contributors meet and invite the public to join local Wikimedia groups. Together, we hope that they will share their knowledge and learn how to contributing to Wikimedia projects, in harmony… and face to face!

Since early January 2016, the French-speaking Wikimedians have been preparing workshops, making lists of articles to create or rework, and looking for places for people to gather: libraries, media libraries, archive centers, universities, studios or even bistros. They have been preparing for a long time because the third annual International Francophone Contribution Month will match the International Day of Francophonie on March 20, the week of the French language from 20 to 28 March, and the month of Francophonie des Amériques.

Whether in Algeria, Belgium, Cameroon, Canada, France, Guadeloupe, Madagascar, Niger, Senegal, Switzerland, Tunisia, the themes are as varied as the backgrounds of the participants: science, feminism, literature, language, geography, or history.

Most residents of Francophone countries speak one or more other languages; French is their second language or the administrative language. To accomodate, workshop participants will also learn to contribute in the language versions of Wikimedia projects in English, Arabic, Creole, Hausa, Malagasy, Wolof, and others.

We can not let others write content about us all the time; it will not be right (…) There are discussions on the Burkina Faso’s WikiProject, in the absence of Burkinabé. (Idriss Tinto, Open Knowledge Foundation, Burkina Faso)

The international month of the Francophone contribution will not just enrich French-language Wikimedia projects in French, but will also train new contributors!

See our workshops map and the contribution month’s official page.