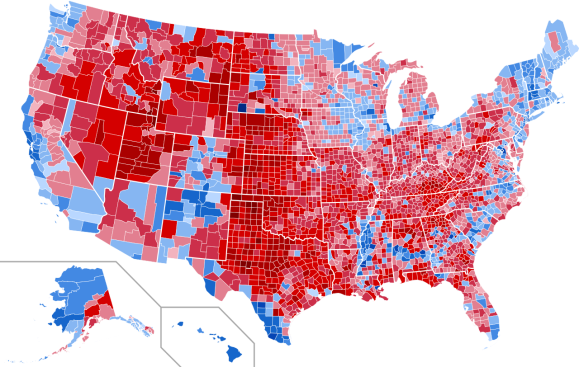 Results of the 2012 United States presidential election, shaded by voting share. Blue is for the Democratic Party, while red is for the Republicans. Map by Inqvisitor, freely licensed under CC BY-SA 3.0.

The race to become the next United States president is intensifying as the two main political parties, the Democrats and Republicans, are holding caucuses and primaries to determine who their candidates will be in the coming two-person general election.

Votes have already been held in Iowa, New Hampshire, South Carolina, and Nevada, and ‘Super Tuesday‘—named for the large number of states holding their votes that day—is today.

The voting process this year has been unusually charged, due in large part to real estate magnate, reality television star, and Republican candidate Donald Trump‘s rhetoric. He is facing Ted Cruz, a senator from Texas; Marco Rubio, a senator from Florida; and two other candidates, all hoping to gain the Republican nomination for the presidency. Trump is currently leading the field in terms of delegates, with Cruz and Rubio trailing.

On the other side, the Democrats have just two candidates—Hillary Clinton, the former secretary of state and senator, and Bernie Sanders, a senator from Vermont. The two are virtually tied in the number of delegates that are voted on from each state. However, many party figures also have a delegate vote, and by that measure Clinton is far ahead.

In this intriguing and compelling race, independent data analyst Eric Houston examined the 2016 presidential race between September 1 and December 31, a period that included eight Republican or Democratic debates. He used the Wikimedia Foundation’s public Pageview API and an associated R client package to crunch the numbers, and in doing so “analyse the impact that these debates have on traffic to Wikipedia and what users are interested in reading about.”

His results are below. We emphasize that any thoughts and opinions are his alone and do not reflect any position or view of the Wikimedia Foundation.

I decided that the 92 day window from September 1 to December 1, 2015 was most appropriate for the following reasons:

I did, however, include graphs at the end of this post that show more recent shifts in the candidates’ view counts (from January 2016 to near the end of February).

I decided to begin my investigation by limiting the field of candidates to the five that most interested me, were getting significant media attention, and seemed to best represent popular interest: 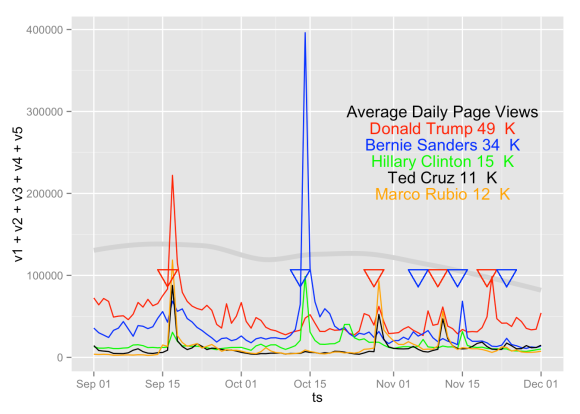 These are the top five candidates by page views in the time period.

Zooming in on the Republican side 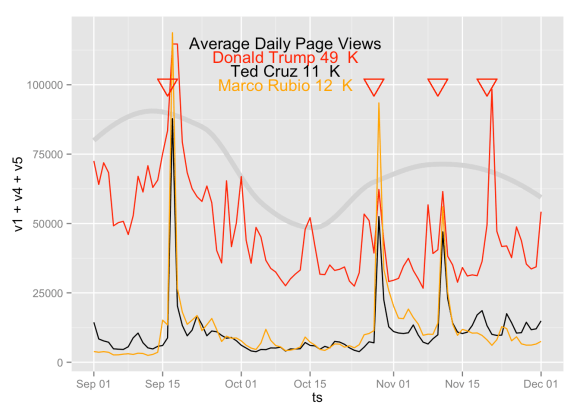 Red arrows represent Republican debates, and the gray line is an averaged total of daily page views. Please also note that the spike for Donald Trump on September 17 has been truncated to show additional detail, and the Y scale has been normalized for peak Marco Rubio views (120k).

Page views again spiked after the final three debates, and:

And on the Democratic side… 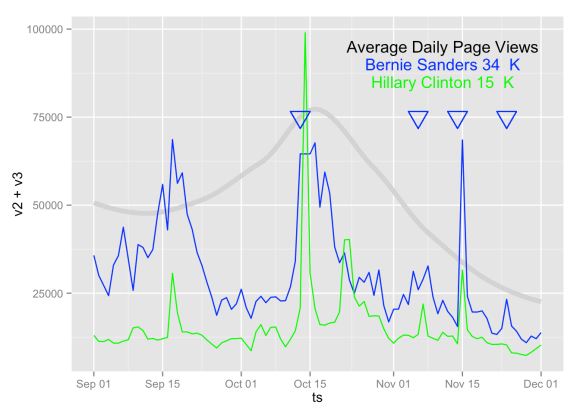 Or are we learning? Did someone—or something—Trump the debates? Looking again at all five candidates, it is clear that the effect of presidential debates on page views has diminished with time. Comparing page views for the first Republican and last Democratic debates:

When looking at the Republican and Democratic graphs:

It is not clear whether Wikipedia readers are Republicans or Democrats—but it is certainly clear that they have shown strong and sustained interest in Donald Trump. 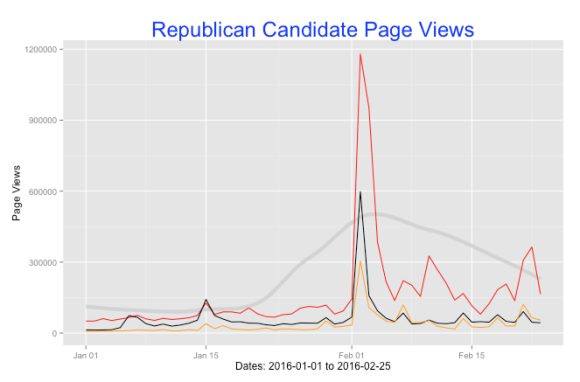 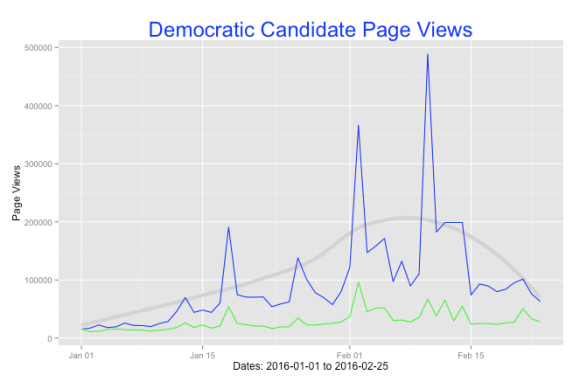 The huge spikes for Trump and Sanders were both one day after the Iowa and New Hampshire primaries, so the primaries are clearly driving traffic to the site, and I would expect that to continue.

So, for whatever reason, Sanders is getting a disproportionate amount of Wikipedia traffic after the primaries.  This could be because Clinton has received extensive news coverage for twenty-five years, whereas Sanders is more of an unknown quantity and people are using Wikipedia to learn about him and answer questions that have not been answered for them by other media sources.

It is also interesting to note that Wikipedia traffic dramatically spiked after Iowa and New Hampshire, but noticeably less after Nevada and South Carolina.

All graphs courtesy of Eric Houston, freely licensed under CC BY-SA 4.0. We emphasize that any views expressed are Houston’s alone and do not reflect any views or positions taken by the Wikimedia Foundation.