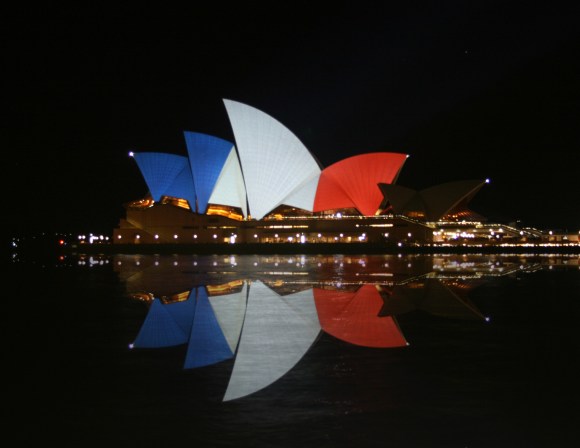 The Sydney Opera House lit in French tricolor after the November 2015 Paris attacks. In only a month and a half, this article received one of the highest edit totals of any article on the English Wikipedia in 2015. Photo by Ludopedia, freely licensed under CC BY-SA 3.0.

These unpaid contributors volunteer an enormous amount of time to bring the sum of all knowledge to the world, free of charge. While it would be extremely difficult to come up with a reasonable estimation of invested time, we can tell you these people created more than 2.5 million articles and, along with several programmed “bots”, made over 115 million edits in the last year alone.[1]

In fact, the English-language Wikipedia actually reached its five-millionth article this year. Even individually, without counting any other language Wikipedia, it is authored by millions of volunteers from all over the world—from more than eight million logged-in accounts and an untold number of anonymous editors.

With all of this in mind, we wondered what articles received the most attention from Wikipedia editors in 2015. The Wikimedia Foundation’s Aaron Halfaker helpfully put together a list of the most-edited articles on the English-language Wikipedia in 2015, similar to a list he created last year.

Most of the list breaks down into three general categories. Topics like “Deaths in 2015” are perennial top-edited pages and will surprise few if anyone.[2] Others reflect popular culture and major events, such as the two tragic terror attacks in Paris or Jurassic World; this becomes much more prevalent as you move down the list. Last, articles like “Geospatial Summary of the High Peaks/Summits of the Juneau Icefield” are principally the work of one author making many thousands of edits.

In either case, they reflect the intense effort Wikipedians—the demonym for Wikipedia editors—put into unlocking the world’s knowledge.

For more on what happened in 2015, live a year in four minutes and watch #Edit2015, our year-in-review video.

[1] These totals do not include December 2015, for which data was not available as of publishing time. Averaged over eleven months, this is over four edits per second.
[2] Wikipedians chronicle the deaths by month, so the page now redirects to a so-called “list of lists of deaths.”