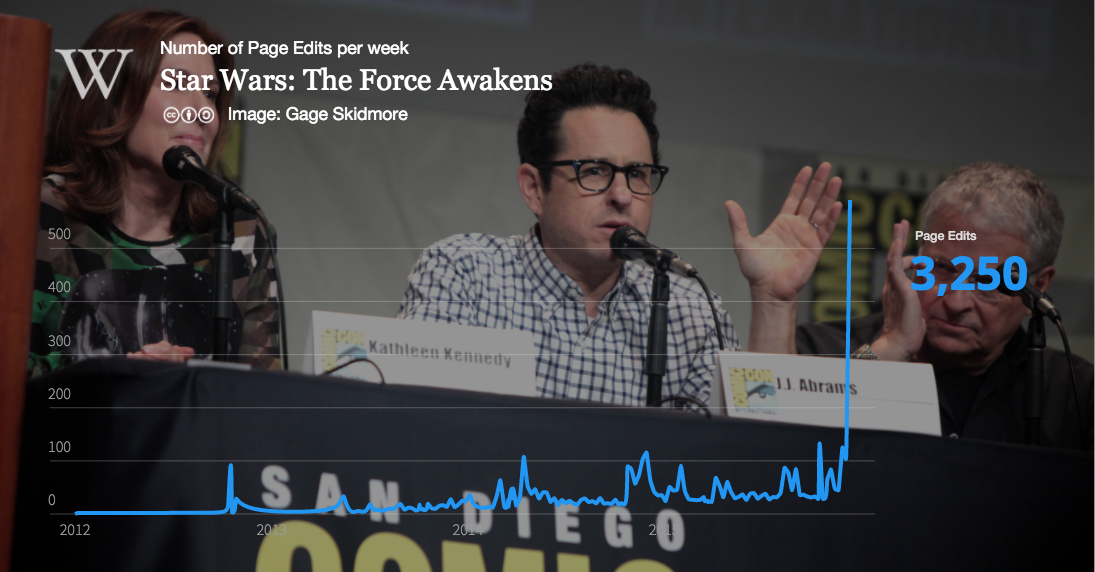 Edits to the new film’s article from its creation in 2012. Image by Joe Sutherland, freely licensed under CC BY-SA 4.0.

Editor’s note: Wikipedia’s article on Star Wars: The Force Awakens is not censored for spoilers; read at your own risk. This post, however, is spoiler free.

The Force Awakens has objectively taken the film world by storm after being released on Thursday, and with analysts predicting it to land in third place—based on the strength of a box office record of $57 million in its first-day preview screenings, $13.5 million more than the previous record-holder—it is well on its way to a place on Wikipedia’s lists of highest-grossing films. In this scenario, Force Awakens would only be topped by James Cameron’s 2009 science-fiction film Avatar (which has made just over $2.78 billion worldwide) and Cameron’s Titanic from 1997.

Wikipedia’s community of volunteer editors have helpfully subdivided the list of highest-grossing films of all time by the overall amount, by year, and adjusted for inflation.  The highest-ranked Star Wars film currently on the full list is 1999’s The Phantom Menace, with $1.03 billion in takings putting it in 20th place.

Adjusted for inflation, however, the highest-grossing list looks markedly different: it is topped by Gone with the Wind, an epic-historical romance film released back in 1939, where main character Scarlett O’Hara is entwined in a complicated love triangle in the midst of the American Civil War. The film made the 2014 equivalent of $3.44 billion; the first, eponymous Star Wars movie ranks third, with $2.83 billion, and even the most ambitious projections for The Force Awakens have it hitting only $3 billion.

For its part, Gone with the Wind was a mammoth production. With a budget of $3.85 million, it was one of the most expensive films of its time—arguably the most expensive ever, for a while—and took two years of production. Actors were interviewed and auditioned for most of that time, with casters targeting big names of the time. With a high-profile cast and Pulitzer prize-winning subject material, 300,000 turned out for its Atlanta premiere; US President Jimmy Carter later called it “the biggest event to happen in the South in my lifetime.”

The film only entered general release in 1941; before that, it was exclusively advance-ticket roadshows, charged at $1 (more than twice the regular price of the time), and production company MGM collected 70 per cent of takings before lowering them upon saturation. It was nominated for thirteen Academy Awards, winning ten of them.

The Star Wars franchise of now eight movies has a way to go as well: they weigh in at fifth place, behind the Marvel Cinematic Universe, Harry Potter, James Bond, and Middle-earth [Lord of the Rings and The Hobbit].

Meanwhile on Thursday, The Force Awakens‘ first night in most markets, its Wikipedia article saw a massive pageview spike. General hype for the film across the Internet—including the official trailer, which currently has 74 million views—mean it has been in the top 20 most-read Wikipedia articles for the whole of December, and number one for three days straight. Yesterday, it surpassed a million views.

The final revealing of Episode VII’s plot means the article has also experienced a flurry of editing. The first edition of the article was published as long ago as 2006—but only as a hoax, refuted by another editor: “George Lucas has said time and time again that there are and will only ever be 6 movies,” one wrote. “Any Real Star Wars fan will not hesitate to discredit this guy as everyone knows, [sic] Lucas never just decided to give away a script to a friend to show to the world before a movie was released.”

The first real article appeared on October 30, 2012, the day the seventh edition was formally announced, under the generic title Star Wars: Episode VII. Though editors originally disagreed with its existence since information was scarce, the article quickly grew as more became known. As the official release neared, editors contributed information as it was slowly revealed by Lucasfilms and, following its acquisition later in development, by Disney.

Now, the article contains a full plot summary, as well as an overview of the film’s development, promotion, and reception. Episode VIII, to be directed by Rian Johnson, is currently slated for release in May 2017.