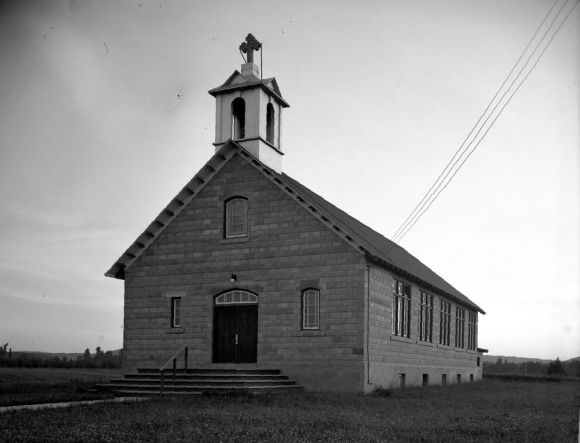 A small church in Quebec, now available for free on Wikimedia Commons thanks to an innovative collaboration between Wikipedia, museums, and education. Photo by Champlain Marcil, public domain.

First, the BAnQ Gatineau team went through 135,425 scanned files from the iconographic archival holdings of Champlain Marcil, a photojournalist for the daily Le Droit from 1947 to 1969. The BAnQ Gatineau team was led by Nathalie Gélinas (Coordinator archivist), with the support of Benoît Rochon (vice president of Wikimedia Canada).

Nearly 200 files, documenting the religious architectural heritage of the Outaouais region, were selected and uploaded to Wikimedia Commons.

Second, students from the course “Wikis, pictures and free licenses” (fr), led by Professor Nathalie Casemajor from the Department of Social Sciences at UQO, worked on eighteen Wikipedia articles on municipalities of Outaouais. They placed images of Champlain Marcil in articles and developed content through a bibliographic research.

Nathalie Gélinas came in class to present the resources of the archive center, and students went to BAnQ Gatineau and digitalized documents in connection with the municipalities of the Outaouais region.

You can visit the Champlain Marcil project and see the uploaded images from BAnQ Gatineau.

60 hour editathon: A straight 60 hours of editing with over 80 people has just concluded in Mexico City’s Museo Soumaya, where they uploaded documents from Mexico’s history to Wikisource and Wikimedia Commons.  Wikimedia Mexico’s Ivan Martinez told us that “we think this event is a testament to our still-living chapter after a Wikimania. One third of the participants were Wikimania volunteers so we are very happy about retention.” Tweets about the event used #50Años50Horas, and a previous 50 hour editathon was held at the museum last year.
Wikipedia Library signups in English, Finnish, Farsi: New signups for the Wikipedia Library, a Wikimedia Foundation (WMF) program that connects editors with the reliable sources they need to create content, have been announced.
Wikimania scholarships open: You may now apply for a full or partial scholarship to Wikimania 2016, the annual conference of the Wikimedia movement that will be held next June in Esino Lario, Italy. Partial scholarships are being brought back after a two-year hiatus.
Foundation news
Discovery team: The WMF’s Discovery department is planning on improving Wikimedia’s search function and adding OpenStreetMaps to the sites, among other initiatives. Do you have questions? Join their IRC office hour on December 17 at 19:00 UTC.
Gadgets 2.0: Wikimedia’s gadget function will be overhauled to make it “more powerful and user-friendly.” For more, see the November Community Tech update on the Wikimedia-l mailing list.
Ombudsman Commission: The Ombudsman Commission, the body charged with investigating potential violations of the Privacy Policy on any Wikimedia project, is looking for new members. Applicants are required to meet several qualifications; if interested, email pearley [at] wikimedia [dot] org.
Help define a new IdeaLab campaign: After the successful Inspire campaign earlier this year, the WMF’s Community Resources team has invited community members to generate ideas for future campaigns, which “generate novel proposals for improving and addressing community needs on the Wikimedia projects to which you contribute.”
State of the Commons: The 2015 State of the [Creative] Commons, the non-profit whose free licenses underpin the Wikimedia projects, has been published.
GLAM newsletter: The monthly GLAM Newsletter, looking back on November, has been published.
Arbitration Committee: The English Wikipedia’s Signpost has a rundown and analysis of the recent arbitration committee election. Nine individuals were elected by a record number of voters: “[one] consequence of surge in voter numbers was a reduction in raw proportional support for the most popular candidates. Last year, the top four candidates were supported by between 50% and 60.5% of voters; this year, the top four were supported by just over 40% of the electorate, and the other successful candidates ranged from the high 30s down to 27.6%.”
Beirut and Paris: How did Wikipedians respond to the reports of terror attacks in Beirut and Paris last month? The WMF’s Joe Sutherland writes that “Wikipedians are changing how breaking news is gathered and reported by curating news from around the world to produce a constantly updated, crowdsourced view.”