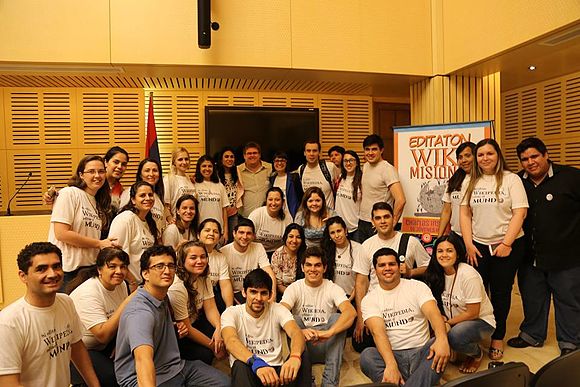 In 1615, a Roman Catholic missionary, Father Roque González de Santa Cruz, founded a settlement on what Argentines know today as the city of Posadas. In 1884, Posadas became the capital of Misiones, a political peninsula bordered by Paraguay on one and Brazil on two sides. Four hundred years later, over one thousand high school students from over 200 schools around the province took part in “Wikimisiones” Wikipedia edit-a-thons to commemorate this history, contributing to 40 articles and adding many images.

Today, Misiones is not one of Argentina’s most prosperous regions, and its general level of Internet connectivity is mediocre. Still, it boasts an impressive level of cultural diversity between the indigenous Guaraní people; Polish, Swedish, and German immigrants, among others; and its location on Argentina’s northern frontier with two international borders. Melina Masnatta, the Education Manager for Wikimedia Argentina, notes that these qualities make Misiones “a very rich culture in terms of Wikipedia purposes, needs, and content.” On connectivity, the federal government has mandated the use of technology in the classroom—a policy aimed at lessening educational opportunity gaps in the nation and pushing the Internet into the top priority of school administrators—but in our case, it did not always work as expected. This shortcoming led us to train and conduct virtual and in-site meetings in advance. These first meetings were key in building a community of Wikiambassadors, who worked offline on their articles a month before the event.

Using the unique quadricentennial anniversary, Wikimedia Argentina organized Wikipedia trainings and edit-a-thons around the country for high school students so that could add to the Spanish Wikipedia’s coverage about the province they all live in. Due to Internet issues, many of these were completed offline. The final event which started with a panel between the WMAR´s team and the local education coordinator Flavia Morales, was a two day conference in Posadas—a special event, given that many of the students had never seen the capital before and traveled through the night to be there. Students rotated between “Scanpedia,” a media digitization station that taught students about the Wikimedia Commons and allowed them to upload historical documents and images, and a Wikipedia station where they were able to upload their own work. They posted on social media using the hashtag #Wikimisiones.

Also present at the conference was Leandro Kibisz, who was born and began editing Wikipedia in Misiones. He attended the conference in an effort to inspire the young students, saying (edited for clarity):

“It was a great joy to have the chance to be part of Wikimisiones. It was an idea that I had in mind many years ago, and it’s now finally come. I started editing Wikipedia ten years ago by adding content about Misiones, and it feels great to know that I helped transfer those skills and that experience to the thousands of young people who attended the event. To see involved kids from cities like Bernardo de Irigoyen or San Pedro—populations that are usually behind in technological access—fills me with emotion and makes me believe that we are closer to Wikipedia’s utopian ideals: ‘Imagine a world in which every single person on the planet is given free access to the sum of all human knowledge.’ Thanks to this event, our encyclopedia is nurturing useful information, and the people that were once just readers will now be able to be active editors.”

According to Masnatta, they tried “to empower the young students as protagonists and make them into digital citizens using technology … to spread their local history.” With this in mind, they kept long-term goals in mind while planning this conference by recruiting active Wikipedians from our community to become volunteers or mentors that will help students with their edit-a-thons. Wikimisiones has also gained a place in a provincial educational online portal. The chapter plans to use the lessons learned from this experience in planning future edit-a-thons in the rural areas outside of the Buenos Aires province. 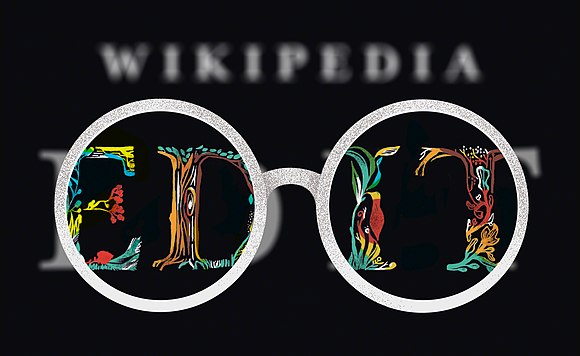 Illustration by Mun May Tee, freely licensed under CC BY-SA 4.0.

New artificial intelligence service: Aaron Halfaker of the Wikimedia Foundation (WMF) has developed “ORES,” which will increase the accuracy of Wikipedia’s automated anti-vandal tools. According to the Wikimedia Blog announcement, “This service empowers Wikipedia editors by helping them discover damaging edits and can be used to immediately “score” the quality of any Wikipedia article. … Wikipedia is edited about half a million times per day. In order to maintain the quality of Wikipedia, this firehose of new content needs to be constantly reviewed by Wikipedians. [ORES] functions like a pair of X-ray specs, the toy hyped in novelty shops and the back of comic books—but these specs actually work to highlight potentially damaging edits for editors. This allows editors to triage them from the torrent of new edits and review them with increased scrutiny.” The story has been covered by Wired, MIT Technology Review, BBC News, Engadget, InformationWeek, Digital Spy, The Stack, The Next Web, Yahoo News UK, and Slashgear, among others. It has also been featured on HackerNews.
Wikimedia Conference: The 2016 edition of the annual Wikimedia Conference will be held in Berlin, organized by Wikimedia Germany (Deutschland) with assistance from the Wikimedia Foundation. The conference is intended only for Wikimedia affiliates, the WMF Board of Trustees and staff, the Affiliations Committee, and the Funds Dissemination Committee; it has been held each year since 2009. This year’s event will focus on “movement impact,” a crucial component of Wikimedia financing that is, according to the organizers, not always fully understood.
Community Wishlist Survey: This survey is soliciting ideas that the WMF’s Community Tech team can work on in the coming months, restricted to “improving or producing curation and moderation tools for active contributors.” These proposals are now open for voting on Meta (see previous coverage). The survey was covered in the German Wikipedia’s Kurier.
Scholarship committee announced: The members of the Wikimania scholarship committee have been announced. It will be composed of eleven community members, seven of which come from the Global South (see previous coverage).
Legal: New developments on Wikimedia’s legal front include a lawsuit from a museum in Germany and a victory in Dr. Evelyn Schels v. Wikimedia Foundation, Inc..
Wikimedia grants: The volunteer-led Funds Dissemination Committee recommended the disbursement of nearly US$3.8 million last week.
Fundraising
Annual fundraiser begins: The WMF’s annual fundraiser has begun. It “aims to raise $25 million in December through the annual campaign on the English Wikipedia.” More information is available in last week’s Signpost, the community news outlet on the English Wikipedia.
Endowment?: The WMF’s Lisa Gruwell has opened a discussion on whether the organization should have an endowment to safeguard against future funding problems. The multifaceted essay is already receiving attention on its talk page, where Gruwell has solicited the community’s thoughts on five different questions.
Wikidata: Is Wikidata the new Rosetta Stone? Wikimedia editor Kippelboy believes so in an op-ed published on the blog of Centre de Cultura Contemporània de Barcelona, a museum in Barcelona, and re-published in the Signpost. Kippelboy writes that “We can create a new Rosetta Stone that can serve as an open, transparent key to unlock the secrets of today’s world, and perhaps as a documentary source for future generations or civilisations. Let us take responsibility for it.” However, Mark Graham in Slate this week separately raised questions about Wikidata and related initiatives, concluding that “Linked data and the machine-readable Web have important implications for representation, voice, and ultimately power in cities, and we need to ensure that we aren’t seduced into codifying, categorizing, and structuring in cases when ambiguity, not certainty, reigns. There is perhaps still much to be said for a Web more tailored to humans rather than machines.”
Knowledge is joy: Presented without comment. What do the words mean to you?
Erasmus Prize: The prestigious Erasmus Prize was awarded to Wikipedia on November 25 (see previous blog coverage or the Kurier‘s two articles). Desiderius Erasmus was a Dutch Catholic theologian who lived during the Reformation; he is remembered today as a preeminent humanist and scholar. According to the official announcement from the Praemium Erasmianum Foundation:

Wikipedia receives the prize because it has promoted the dissemination of knowledge through a comprehensive and universally accessible encyclopaedia. To achieve that, the initiators of Wikipedia have designed a new and effective democratic platform. The prize specifically recognises Wikipedia as a community — a shared project that involves tens of thousands of volunteers around the world who help shape this initiative. …
By distributing knowledge to places where it was previously unavailable, Wikipedia also plays an important role in countries where neutrality and open information are not taken for granted. With its worldwide reach and social impact, Wikipedia does justice to the idea of a single yet diverse world. It is a digital reference work available in various languages, undergoing permanent development. Through its open character, Wikipedia highlights how sources of knowledge are not neutral and must always be weighed. With its critical attention to text, sources and the expansion of knowledge, Wikipedia reflects the ideas of Erasmus, the world citizen after whom the prize is named.