This week, the Funds Dissemination Committee (FDC) recommended the distribution of almost $3.8 million to 11 independent affiliate organisations around the world.

This, the first round of Annual Plan Grant (APG) deliberations for 2015–16, were conducted at a marathon four-day meeting, but come at the conclusion of months of work by the committee volunteers, the Wikimedia Foundation (WMF) supporting staff, and of course by the applicants themselves. This committee is composed of nine elected and appointed volunteers from countries around the world; each has been editing Wikimedia projects for over a decade. Now in its fourth year, the FDC meets twice annually to decide on funding levels for several Wikimedia affiliates. These deliberations are the first since the movement-wide 2015 Wikimedia elections.

While many Wikimedians are interested to see the amount of money that is being recommended, few are aware of the processes that the FDC uses to come to these decisions. Even fewer are aware of the level of conscientious thought that goes in to these deliberations—both before and during the meeting.

The number, variety, and length of input documents needed for these deliberation is very high. Also, nearly all of them are publicly available to ensure transparency. Context is key in making decisions about funding activities all over the world—what is considered value for money, achievable, or even legal, can vary greatly depending on the applicant’s local situation. This extensive documentation, then, is required not only to ensure financial transparency in our movement, but also to ensure that local context and narrative is understood.

Once the applications are published, as per the APG calendar, the Wikimedia community at large is invited to comment. As the time to meet in-person approaches, the regular phone-meetings with the WMF support staff increase in frequency. This allows the committee members to identify any confusion or concerns they see across several applications, so that the staff can seek clarification from all applicants. Feedback from the community, staff, committee and applicants also helps to refine the application process itself each year.

Meeting in-person, which the FDC does twice annually, is a rarity in the Wikimedia community’s various volunteer committees. However, given the significance of the decisions being made, there are great needs to ensure that all committee members are able to participate on an equal footing and consensus is obtained in all aspects of the review.

The “bubbles”. Example of initial allocations for a fictional returning applicant requesting an increased grant. The spread ranges from full funding to lower than the current amount. Image by Sati Houston, freely licensed under CC BY-SA 4.0. 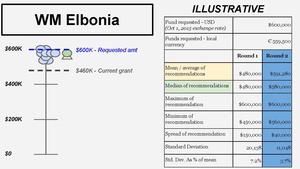 Example of a second round of allocations, following discussion. Note how the minimum increased and therefore the “spread” decreased. Image by Sati Houston, freely licensed under CC BY-SA 4.0.

The first major tool that the FDC uses to come to agreement, after reading all the documentation, is to assemble initial suggested allocation amounts. By independently sending these numbers to the WMF support staff before the in-person deliberations, each committee member can make a “first attempt” at allocating amounts without being influenced by the others. When combined, these initial allocations are visualised on a scale from zero to the full request, colloquially called “the bubbles”.

Being able to see how far apart each of the committee members are in their initial allocation, “the spread”, gives an excellent starting point for discussions. Some applicants receive a very narrow spread of initial allocations, meaning that all committee members generally agree on result they want to see but not necessarily why, while other applicants receive a wide spread (either with a equal distribution or with individual outliers). A facilitated discussion of each applicant then follows, ensuring each has adequate time dedicated to it to highlight important positive areas or risks, and especially to identify important program areas. After all, if the committee is recommending to the WMF Board that it gives large amounts of money to a legally independent organisation, the Board needs to be able to justify it.

The second major tool used is the “Gradients of Agreement“. Once the committee has extensively discussed an application, and has submitted at least two rounds of allocations to see if the “spread” is decreasing, the Chair of the committee proposes a specific amount to discuss. This could be the highest amount suggested in the latest round of allocation, the average, or the lowest number. This process can be repeated many times using different increments. By gauging the degree of strong and weak support or opposition to specific amounts, it is possible to agree on an amount that has the highest aggregate support from the whole committee. If necessary, serious dissenting views can also be expressed in the recommendation document.

At least one representative of the WMF Board of Trustees is present at all times to confirm that the process is conducted fairly. Also, given that all FDC committee members are also Wikimedia community members, there can be real or perceived conflicts of interest. To address this, the process for “recusal” is extremely thorough. In this round of deliberations, four members of the committee did not participate in deliberations about three of the applicants. They did not have access to any non-public documents about that application, were not present while the application was discussed and funds allocated, and did not participate in drafting the recommendation.

Now that the recommendations have been published, applicants may choose to appeal to the independent FDC ombudsman before the Board decides on whether to accept or modify the FDC’s recommendation. After the Board’s decision, successful applicants can  begin their projects! Six months from now these affiliates will begin again with a letter of intent to apply for the next round of APG funding. Meanwhile, the FDC process is already underway for the second group of APG applicants for 2015–16.

More information about these grants can be found in our mailing list announcement to the Wikimedia community.