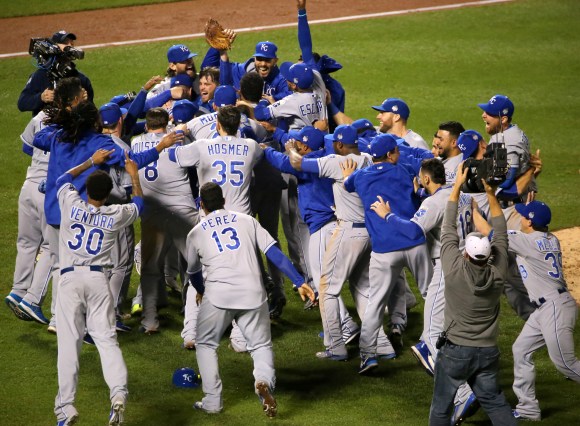 The World Series was first played in 1903; this year’s contest was the 111th time it has been played. Photo by Arturo Pardavila III, freely licensed under CC BY 2.0

Yesterday, the Kansas City Royals defeated the New York Mets in the 111th annual World Series, Major League Baseball’s best-of-seven championship series. It is the most prestigious competition on the baseball calendar in the United States, and attracted capacity crowds throughout all of its five games as the Royals emerged 4–1 victors—their first World Series title in thirty years.

The Royals qualified as the winners of the American League, while the Mets took their place thanks to winning the National League. The Mets beat the Chicago Cubs to win the right to play in the World Series—upsetting many fans of Back to the Future II, the 1989 film that predicted the Cubs would win the whole thing in 2015. It also disappointed Cubs fans that hoped their team would break through and appear in their first World Series since 1945 and win for the first time since 1908.

Wikipedia’s article on the 2015 World Series was viewed almost 44,000 times on the day of the final, and ultimately deciding, game at Citi Field in New York City. The Royals’ starting pitcher was Edinson Volquez, whose father had died days earlier. He gave up two runs to the Mets, but the Royals scored two runs of their own in the nominal final inning to tie the game. In extra innings, they scored a crucial five additional runs to cement their victory in the game and series.

They are the first team in over two decades to win a World Series after losing in the previous year’s World Series.

The Most Valuable Player, an award given to the best player from either side, went to the Royals’ catcher Salvador Pérez. Pérez is a three-time MLB All-Star who had a .364 batting average during the series—including two important hits in the final game—and directed the Royals’ pitching staff through all five games. 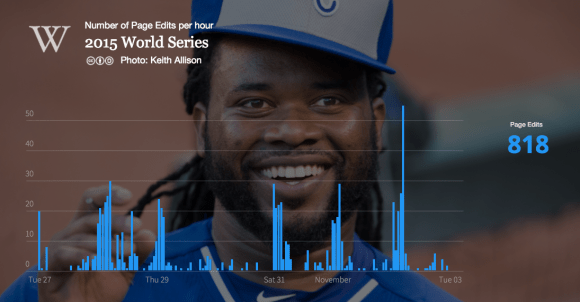 Edits made per hour to the “2015 World Series” article throughout the World Series itself. Photo by Joe Sutherland, CC BY-SA 2.0.

Among the four WikiProjects covering the article was WikiProject Baseball, a task force with more than 63,000 articles under its jurisdiction. 268 of these articles are classed as “featured”, the highest honour that can be bestowed upon an article by the community.

The article itself has been edited almost 1,200 times since its creation; as with those on most current sporting events, the vast majority of these were made during the event itself. 818 edits were made during the World Series (between October 27 and November 3, in UTC), almost three quarters of all the edits.

The community also had to contend with vandalism edited into articles related to the World Series finalists in their run in to the final. During the Mets’ win in the National League Championship against the LA Dodgers, New York’s Rubén Tejada had his leg accidentally broken by opposing baseman Chase Utley—an incident resulting in vandalism to Utley’s Wikipedia article from anonymous editors. These changes, however, lasted only minutes—they were swiftly reverted by various members of WikiProject Baseball, including EricEnfermero and Dodgers fan Spanneraol.