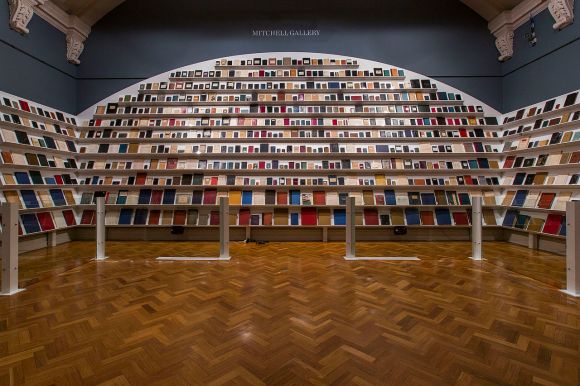 The State Library of New South Wales has hundreds of diaries from Australian soldiers in World War I. Photo from the library, freely licensed under CC-by-SA 3.0.

The State Library of New South Wales in Sydney was the first library in Australia and prides itself on a fantastic collection of manuscripts, paintings and photographs, oral histories, and printed works. This library has had a Wikipedia project since 2012, when three members of Wikimedia Australia visited to provide training sessions for interested staff. The group is now one of the most active GLAM-Wiki participants in Australia, and uses the library’s extensive collections to add well-cited information to Wikipedia and copyright-free images to Commons.

An example of an article created by the library’s Wikipedia group is List of Australian diarists of World War I. During the war, despite being forbidden by their superiors, many soldiers kept a personal diary small enough to hide in their top pocket. In 1919, the library instigated a drive to collect these documents from returned soldiers, chiefly through newspaper advertisements.

Some years later, the Australian War Memorial followed suit by writing personal letters to families of lost soldiers and requesting donations of diaries. In their letters, the memorial described the value of soldiers’ diaries as records of the “supreme effort and endurance in circumstances of which, unfortunately, there is in many cases nowadays practically no other existing record.” The result of these two great collecting drives is that many of these precious first-hand and uncensored accounts of war are housed in collecting institutions who can ensure their long term preservation and access.

Members of the public frequently ask for access to these diaries in the State Library collection and that demand inspired the library’s Wikipedia group to compile a list of known Australian diarists from World War I. The group was able to compile a list of approximately 1200 diarists, including those held in other GLAMs and private collections. Since the article has moved into Wikipedia’s mainspace, contributions of other editors have expanded the list to around 1330. The list is probably the most comprehensive list of these diaries available to researchers, and because each listing is backed up by a citation, the article currently sits at number 2 on Wikipedia’s list of articles with the most references—something these librarians are very proud of!

The list of Australian diarists holds enormous value to researchers and scholars in chronicling a unique set of material held across diverse collections. It also serves as a fantastic resource for the general public researching the lives of family members and offering them the opportunity to engage with primary sources from the First World War. Projects such as this highlight the ability of individual GLAM organisations to produce in-depth articles by starting with their own collection strengths and enhancing them by referencing other GLAMs and gaining the contributions of Wikipedia’s editors.

A hundred years on, these little diaries keep finding new pockets to hide in.