On September 25, 26 and 27, Wikimedia Spain celebrated its third Wikimedia Conference at the Colegio Mayor Universitario Isabel de España in Madrid.

The conference began on the afternoon of Friday, September 25 with different personal experiences related to some of the Wikimedia projects, especially Wikipedia. The first presentation was made by the designers Myriam Cea and Beatriz Fernández (Gráfica Liebre), who told how they came to Wikimedia movement through the collaboration with WikiArS initiative in Madrid, organizating workshops and facilitating the presentation of the project at Libre Graphics Meeting 2014, held in Leipzig (Germany). The next presentation was Pepa Pacheco, responsible for online communication at Museo del Traje (Costume Museum); she told about the use of digital media to improve public participation in the museums, the project Europeana Fashion and the edit-a-thon in which the Museum participated last January, which helped increase the content about fashion and clothing in the encyclopedia digital.

The third presentation was given by Professor Camila Paz and three of her students from San Saturio School, who presented the Clásicos sonados project, whose aim is to record classical texts in their original language and their inclusion in the Wikimedia projects. After a short break, we attended a presentation by Pilar Mareca and Vicente Alcober, professors of the School of Telecommunications (Technical University of Madrid); they spoke about the educational project carried out since 2010 with students editing articles about Physics in Wikipedia. The last of the presentations was given by Olga Berrios, ICT and NGOs specialist, who described the situation of the contents related to disability, poverty or human rights in Wikipedia and proposed to establish the connection between Wikipedia and NGOs to improve such content. To end the day there was a lively round table with the participation of all the speakers and the audience.

Assistants to visit the National Archaeological Museum. Photo by PePeEfe, freely licensed under CC BY SA 4.0.

Saturday, September 26 was full of events. Earlier in the morning there was a workshop on the Wikidata project, conducted by telecommunication engineer Diego de las Heras, who presented the possibilities, the actual content and how to edit it, plus tools like Autolist 2. It was followed by a workshop on free graphics, by Myriam Cea and Beatriz Fernández (Gráfica Liebre), who showed how to use and how to take full advantage of free tools such as Inkscape, to generate vector graphics. Then Jesús Tramullas, professor at the University of Zaragoza, spoke about sources and verifiability in Wikipedia, on the problems of selection and use of primary sources in articles and references. To end the morning, Sara Rodriguez, lawyer specializing in intellectual property, presented the different types of copyright under the existing Spanish Intellectual Property Law, the most important movements of open knowledge that exist and an analysis of the Creative Commons licenses.

After a break for lunch, in the afternoon Wikimedia Spain held its fifth general assembly, where a new board for the next three years was elected. Finally, on the morning of Sunday September 27, we enjoyed two guided visits to the Museum of Romanticism and the National Archaeological Museum. Progress of the Conference could be tracked through social media platforms by following the hashtag #WikiConnection and we published a Storify about it.

The Wikimedia Conference was organized with the graphic design studio Gráfica Liebre. 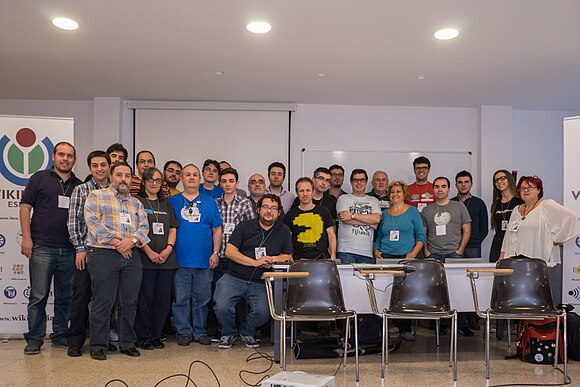 Group photo of the participants in the V General Assembly of Wikimedia Spain. Photo by Pedro J. Pacheco, freely licensed under CC BY SA 4.0.