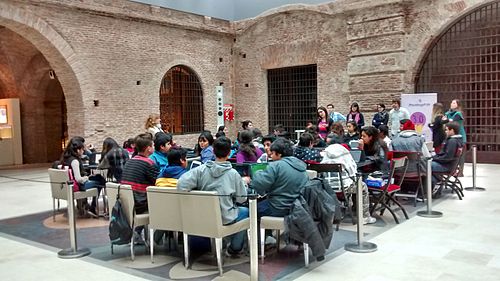 Delia Vazquez, a teacher trainer and a high school teacher, always considered that she was lacking a theoretical foundation that allowed her to defend and argue for Wikipedia’s use in the classroom—something that would allow her to “move away from the prejudices that are common among my colleagues.” With this feedback in mind, and a formed idea of the audience we wanted to address, we designed an education program for Wikimedia Argentina, which has aimed to change the perceptions of Wikipedia in educational contexts, and emphasize the key role open culture has in education.

As digital culture is already a topic in the education agenda—Argentina mandates the inclusion of technology in the classroom—our first strategy was to articulate skills and values related to collaborative production and open licenses. To this end, we designed teacher training workshops (online and in-person). Mario Cwi, a high school teacher and a coordinator of education technology area in his school, defied his own preconceptions about Wikipedia when he took part our training. By exploring the matrix and understanding Wikipedia from behind the scenes, such as looking at article edit histories and reading discussion pages, he and his colleagues dared to publish their own content and open them for discussion with other editors. “This is how we discovered something wonderful that we missed: Wikipedia is much, much more than a giant online encyclopedia. Wikipedia is a space that promotes the development of collective intelligence and participatory culture,” Mario told us.

We also interacted with students through edit-a-thons and WikiWorkshops, getting them to edit and participate in editing several Wikimedia projects—not just Wikipedia.

We focused our efforts on creating a unified approach among the digital and scholarly cultures, related to the free culture, as we found a gap in knowledge around what free licenses mean—a gap that was also linked to a general ignorance about Wikipedia as a platform that goes far beyond the collaborative construction of knowledge. This is a point that even today has not found traction in educational contexts.

We began with favorable circumstances, as Argentina’s technology in education policy meant that each student was issued a netbook. However, digital access does not always equate with real access—we found gaps in actual knowledge, competencies, and practices.

Unfortunately, having a pro-digital political climate does not necessarily mean that the distributed laptops will be connected to the Internet, will be used for critical or creative purposes, or used in any sort of educational sense. Argentina’s policy had, in practice, been altered to mere material access to technological tools. Moreover, we faced strong misconceptions and negative opinions about the use of technology in general, and specifically about Wikipedia. This made it hard to forge a unified foundation of digital experiences from which to build on with our education program.

This context made us reconsider the activities we wanted to bring to the classroom. After the first experience, we focused on listening to what other involved actors had to say about their discourses and experiences.

We took a step back and started on a more elementary stage, including (among other things) considering that many times there is no Internet connection. In a scene like this, it is difficult to talk about digital practices, like editing Wikipedia; we were often forced to use cellphones and alternative ways to connect. At the same time, we had to deconstruct negative discourses by using the mainstream media and addressing problematical situations as users, like getting edits reverted with no further explanation of why.

Given these difficulties, the program took far longer to complete than when we first envisioned the program. Still, once we implemented the new strategies, the ownership, reflections, and interests of participants became genuine, and the teachers we worked with became motivating agents, or as we like to call them: Wiki Ambassadors.

Find this and other shared lessons on Wikimedia Argentina’s progress report.

«What I learned» is a blog series that seeks to capture and share lessons learned in different Wikimedia communities over the world. This knowledge stems from the practice of Wikimedia programs, a series of programmatic activities that have a shared, global component, and a singular, local aspect. Every month, we will share a new story for shared learning from a different community. If you want to feature a lesson you learned, reach out!.